In several forms of SMA, respiratory muscle weakness is a significant problem. It’s the most common cause of death in chromosome 5 (SMN-related) SMA types 1 and 2, though not the only cause. 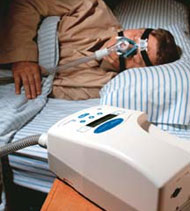 When the respiratory muscles weaken, air doesn’t move into and out of the lungs very well, with subsequent adverse effects on general health. Signs of weakening respiratory muscles include headaches, difficulty sleeping at night (insomnia), frequent yawning or sighing during the day, excess sleepiness during the day, poor concentration, difficulty lying flat, chest infections, and, eventually, heart damage and respiratory failure.

Often, in infantile-onset SMA, the muscles between the affected baby's ribs are very weak, while the diaphragm muscle stays fairly strong. This causes a child to appear to be breathing by moving their belly rather than their chest. The body can also appear to be pear-shaped.

In recent years, the availability of portable, effective ventilation devices has created more options for newborns with SMA, and in some cases has greatly extended life. Assisted ventilation also can help children and adults with different forms of SMA. Many physicians advise starting out with noninvasive ventilation, which generally means that air (usually environmental, and not enriched with oxygen) is delivered under pressure through a mask or mouthpiece. This kind of system comes in many forms and can be used as many hours of the day and/or night as necessary. It can easily be removed for eating, drinking, and talking.

Other necessary aspects of respiratory care in SMA include clearance of respiratory secretions, sometimes also achieved with a mechanical device, and prevention of infection. An insufflator-exsufflator is one type of device that can assist with clearing respiratory secretions from the airway. The device applies positive pressure to the airway and then rapidly reverses to negative pressure, mimicking a natural cough. The CoughAssist, made by Philips Respironics, is an example of this type of device.

Another type of airway clearance aid is a high-frequency chest wall oscillation device. This device is a vest that rapidly inflates and deflates, vibrating the chest and creating "mini-coughs" that dislodge mucus from small airways, moving it toward larger airways from which it can be more easily coughed out. The InCourage system, made by Philips Respironics, is an example.

To prevent respiratory infections, almost everyone with SMA should get a flu shot every year. Other precautions include staying away from crowds and getting adequate rest and nutrition.

An MDA Care Center team can advise you about respiratory care, flu shots, and related matters.

Swallowing problems occur when the muscles of the mouth and throat are weak. 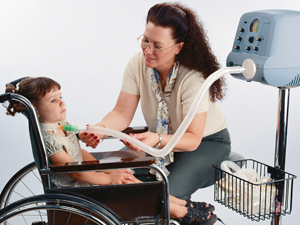 Babies with severe swallowing and sucking weakness can be fed by alternative methods, such as a feeding tube, often called a gastrostomy tube or g-tube. A feeding tube is a small, flexible tube, about the diameter of a pencil, that allows liquid nutrition (homemade or commercially prepared) to enter the stomach directly, bypassing the mouth, throat, and esophagus. Some feeding tube systems are constructed so that the tube can be detached from a "button" on the abdomen when it’s not in use.

Some g-tube users also can eat and drink by mouth, in addition to using the tube. If the main problem is weakness of the chewing muscles, making eating laborious and time-consuming, then it’s fine to eat by mouth for pleasure and extra nutrition and use the g-tube for basic calories. By contrast, if the main reason for the tube is aspiration of food and liquid, then it’s probably not safe to eat and drink by mouth.

Speech-language pathologists (SLPs) are educated in treating swallowing problems as well as those associated with speech. Your MDA Care Center team can advise you about swallowing muscle weakness, including special ways of preparing food and the use of gastrostomy tubes. 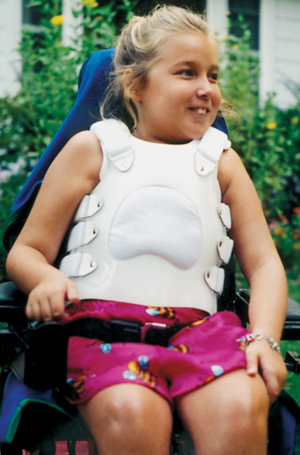 Weakness of the muscles of the back that normally support the flexible, growing spine is a major problem in childhood-onset SMA. If it’s not corrected, the child may develop scoliosis — a side-to-side curvature of the spine — or kyphosis, a forward curvature of the spine, or both. Some may even end up with "pretzel" types of curvatures that make it impossible to sit or lie down with comfort.

Some physicians believe that severe spinal curvatures may compromise respiratory function in some cases, if the curved spine compresses a lung.

A back brace or corset that supports a child in a certain position is often prescribed to try to direct the spine as it’s growing. Braces don’t solve the problem, but they may slow the progression of a curve.

The permanent solution to spinal curvature is almost always spine-straightening surgery, which can be done if the child’s respiratory status is good enough to withstand the surgery.

The timing of back surgery is tricky. Doctors generally like to wait until maximum spinal growth has been achieved because that allows a simpler surgical technique to be used. On the other hand, if respiratory status is deteriorating, surgery often can’t wait until growth is complete. Here again, an MDA Care Center can help with your decision.

A child or adult with SMA who must undergo surgery (for example, to correct scoliosis) needs to take special precautions. The surgical team, particularly the anesthesiologist, must thoroughly understand SMA.

Sometimes, especially in the early stages of SMA, the muscle cells that aren’t receiving nerve signals develop certain abnormalities as they try to "reach out" to nerves. These abnormalities can lead to dangerous reactions to muscle-relaxing drugs often used during surgery. Doctors can get around this problem, if they’re aware of it, by using different drugs.

Additionally, anesthesiologists must consider carefully a patient’s condition before using spinal and epidural anesthesia because these patients might have severe spine deformities. Currently, there are no guidelines in place, but successful outcomes have been reported with both cesarean section and vaginal delivery.1,2

Many people wonder if a special diet will affect the course of SMA. While it’s certainly true that children and adults with SMA need good nutrition, so far, there’s little evidence to suggest that any particular type of diet is useful against SMA — and in fact some diets may be harmful.

For example, special formulas made up of broken-down protein components called amino acids — so-called "elemental diets" — actually may cause problems for children with SMA who have little muscle tissue. Some experts say blood levels of these amino acids can become too high if there isn’t enough muscle tissue to properly use them.

Children and adults with SMA run the risk of becoming overweight, probably because they can’t exercise effectively and are taking in too many calories for their level of activity. With the guidance of a physician or nutritionist, it should be possible to keep weight under control. Some children may do better with small, frequent feedings than with three large meals a day. In addition, some physicians recommend over-the-counter supplements, including creatine and/or coenzyme Q10, to meet nutritional needs.

Bulbar dysfunction, inability to eat, risk of aspiration, and failure to thrive is very common within the SMA population, especially those diagnosed with SMA type 1. Therefore, food consistency changes can help to improve food intake and reduce the risk of aspiration.

An MDA Care Center physician and other staff members can help you with nutritional issues for yourself or your child.

How much and what kinds of activity are best? 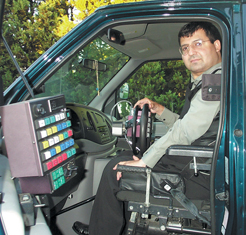 In SMA, most physicians advise that doing as much physical activity as is comfortable without going to extremes is a good idea, in order to maintain general physical and psychological health and well-being.

It’s important to protect joints from stiffness or injury, preserve range of motion (flexibility in the joints), maintain circulation, and, especially for children, allow enough mobility for exploration of the environment.

Exercising in a warm pool (85 to 90 degrees Fahrenheit) may be particularly beneficial. A person with SMA shouldn’t swim alone, and appropriate safety precautions should be provided.

While some physical therapy experts believe over-exercising muscles is not a problem, others believe exercising to exhaustion can "burn out" remaining motor neurons before their time. More research is needed in this area; in the meantime, it seems sensible to exercise with discretion and stop before reaching the point of exhaustion.

For more information, see Exercising with a Muscle Disease.

Physical therapy and occupational therapy programs can help children and adults learn the best ways to maximize their muscle function and accomplish activities of daily living. A referral to a physical or occupational therapist can be obtained through your MDA Care Center.

An array of assistive technology products can help even very young children explore the world despite having weak muscles. Standers, walkers, various kinds of powered and manual wheeled vehicles, and braces (orthoses) can help with standing and moving around. Therapists also can help teachers and parents find the best physical solutions for school environments.

Other useful technology can help with writing, painting, using a computer or telephone, and electronically controlling the environment (for example, temperature, lighting, televisions, and so forth).

Spinraza (nusinersen), a novel therapy that modifies the SMN2 gene in order to increase the production of normal and functional SMN2 protein, has been approved in several regions and countries, including the United States, Canada, Europe, Brazil, Australia, and Japan. Spinraza is administered by intrathecal injection (via an injection into the spinal canal, or into the subarachnoid space within the brain that’s connected to the spinal canal). Spinraza is recommended for most infants with SMA, especially those between 2 and 12 years old.

Spinraza’s approval by the US Food and Drug Administration (FDA) and the European Medicines Agency was based on the results of two large trials. One was named ENDEAR, which enrolled patients with SMA who were 7 months old or younger, and the other was named CHERISH, which enrolled patients 2 to 12 years old. These studies showed improvement in both lifespan and quality of life. For more information visit New Hope for Kids and Adults with Spinal Muscular Atrophy.

Novartis collaborated with AveXis to develop the drug Zolgensma (onasemnogene abeparvovac-xioi), which proved to be effective for pediatric patients younger than age 2. Zolgensma, the first-ever FDA-approved gene-replacement therapy for any neuromuscular disease, is a non-infectious viral vector that delivers missing genes to patients with SMN1 gene mutation. This therapy is a one-time intravenous infusion that aims to halt the disease by producing sufficient levels of SMN protein. For more information, visit MDA Celebrates FDA Approval of Zolgensma for Treatment of Spinal Muscular Atrophy in Pediatric Patients

In August 2020, the FDA approved risdiplam (brand name Evrysdi*) for the treatment of SMA in adults and children two months of age or older. Evysdi is an oral medication designed to increase levels of the SMN protein by enhancing production from the SMN2 "backup" gene. For more information visit FDA Approves Genentech’s Evrysdi for Treatment of SMA in Pediatric and Adult Patients.