In spinal muscular atrophy (SMA) types 0 through 4, symptoms vary on a continuum from severe to mild based on how much functional SMN protein there is in the nerve cells called motor neurons. (“SMN” stands for survival of motor neuron.) The more SMN protein there is, the later in life symptoms begin and the milder the course of the disease. The number of copies of SMN2 genes, which can offset malfunctioning SMN1 genes, determines SMA’s severity and the patient’s age of onset.

Mothers of children affected by SMA type 0 may report a decrease in fetal movement in late pregnancy and give birth earlier. These newborns present with severe weakness, hypotonia, and heart defects. Newborns don’t achieve any motor milestones. Often, these babies have facial diplegia (facial paralysis), a lack of reaction to stimuli, and a congenital heart defect.1,2,3  Patients diagnosed with SMA type 0 die from respiratory failure by 6 months of age and sometimes by within the first month after birth.

Children who have noticeable SMA symptoms at or shortly after birth usually are very weak; have difficulty breathing, sucking, and swallowing; and never reach the developmental milestone of being able to sit on their own (SMA type 1 or Werdnig-Hoffmann disease). With technology such as mechanical ventilation and feeding tubes to assist with breathing and nutrition, children with SMA type 1 can survive for a number of years. For more information about the current state of research and new treatments, see Research or MDA Celebrates FDA Approval of Zolgensma for Treatment of Spinal Muscular Atrophy in Pediatric Patients.

SMA type 2 (aka Dubowitz disease, or intermediate SMA) symptoms begin in babies at approximately 3 to 15 months of age who learn to sit unassisted but do not stand or walk independently. This presentation accounts for around 20% of all cases of SMA. Muscle weakness is predominantly proximal (close to the center of the body) and involves the lower limbs more than the upper limbs. Usually, the face and the eye muscles are unaffected.4 Although respiratory complications are a constant threat, children with SMA type 2 usually live to young adulthood, and many live longer.5

When muscle weakness begins in older children and teens who learn to stand and walk but lose these abilities later in life, the disease may be labeled SMA type 3 (aka mild SMA, juvenile onset, or Kugelberg-Welander disease). SMA type 3 accounts for around 30% of cases of SMA. Although some with type 3 stop walking in adolescence, others walk well into their adult years. Most of the patients develop foot deformities, scoliosis, and respiratory muscle weakness.

SMA that comes on in the late teens or adulthood is called type 4, or late-onset SMA. Life span is generally normal in this type. Patients are able to achieve all motor milestones and maintain their ambulation throughout life.4 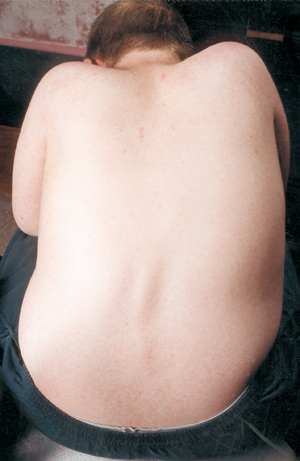 Legs tend to weaken before the arms. The hands may weaken eventually, but they usually stay strongest the longest, and, even if they do weaken, they usually remain strong enough for typing on a computer keyboard and other basic functions of modern life.

The most serious danger in SMA comes from the weakness of the muscles necessary for breathing. Careful attention to respiratory function is needed throughout life, with prompt attention to infections. Your doctor can help you with details of maintaining respiratory health, including clearance of secretions and perhaps assisted ventilation (not necessarily around-the-clock).

Another medical complication in SMA is spinal curvature, usually a side-to-side type of curvature called scoliosis. Scoliosis occurs because of weakness of the muscles that normally support the spine, which is a flexible column. Scoliosis can be very uncomfortable, interfere with position and mobility, and damage a child’s (or adult’s) body image. Some studies have shown that spinal curvatures, if they’re severe, can interfere with breathing.

Many children with SMA start to show a scoliotic curve early in life, which often is treated with a brace until the right time for surgery is reached. Surgeons generally like to wait until growth is complete or nearly so before surgically straightening and fusing the spine. They also take into account a child’s pulmonary function and how fast the spinal curve is likely to progress.

SMA not linked to chromosome 5

Some forms of SMA are not linked to chromosome 5 or SMN deficiency. These forms vary greatly in severity and in the muscles most affected. While most forms, like the chromosome 5-related form, affect mostly the proximal muscles, other forms exist that affect mostly the distal muscles, those farther away from the body’s center, at least at the beginning.