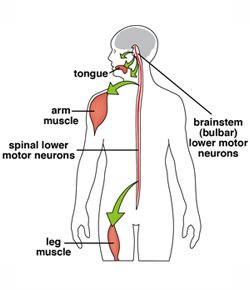 What is spinal-bulbar muscular atrophy (SBMA)?

Spinal-bulbar muscular atrophy (SBMA) is a genetic disorder in which loss of motor neurons — nerve cells in the spinal cord and brainstem — affects the part of the nervous system that controls voluntary muscle movement. Especially affected are the facial and swallowing muscles, and the arm and leg muscles, particularly those nearest the center of the body.

SBMA is sometimes called Kennedy disease, after William Kennedy, the physician who originally described it in 1968. It's also sometimes called bulbospinal muscular atrophy. The adjective bulbar refers to a bulblike structure in the lower part of the brain that contains nerve cells controlling muscles in the face, mouth and throat.

What are the symptoms of SBMA?

SBMA causes weakness of the facial and swallowing muscles, as well as limb weakness. Symptoms also include hormonal dysfunction related to loss of testosterone activity. For more, see Signs and Symptoms.

SBMA is caused by a genetic defect on the X chromosome. It usually affects only men, although female carriers may have a mild form of the disease. Onset is typically in adulthood, between ages 30 and 50. For more, see Causes/Inheritance.

What is the progression of SBMA?

What is the status of research on SBMA?

SBMA research has focused largely on strategies to block the formation of abnormal clumps inside cells; ways to interfere with some of the actions of male hormones; and methods to influence how genetic instructions are "read" by cells.