What is spinal muscular atrophy?

Most of the nerve cells that control muscles are located in the spinal cord, which accounts for the word spinal in the name of the disease. SMA is muscular because its primary effect is on muscles, which don’t receive signals from these nerve cells. Atrophy is the medical term for getting smaller, which is what generally happens to muscles when they’re not stimulated by nerve cells.

SMA involves the loss of nerve cells called motor neurons in the spinal cord and is classified as a motor neuron disease.

In the most common form of SMA (chromosome 5 SMA, or SMN-related SMA), there is wide variability in age of onset, symptoms, and rate of progression. In order to account for these differences, chromosome 5-related SMA, which often is autosomal recessive, is classified into types 1 through 4.

The age at which SMA symptoms begin roughly correlates with the degree to which motor function is affected: The earlier the age of onset, the greater the impact on motor function. Children who display symptoms at birth or in infancy typically have the lowest level of functioning (type 1). Later-onset SMA with a less severe course (types 2 and 3, and in teens or adults, type 4) generally correlates with increasingly higher levels of motor function.

For more, see Forms of SMA.

Chromosome 5 SMA is caused by a deficiency of a motor neuron protein called SMN, for “survival of motor neuron.” This protein, as its name implies, seems to be necessary for normal motor neuron function. SMN plays a pivotal role in gene expression in motor neurons. Its deficiency is caused by genetic flaws (mutations) on chromosome 5 in a gene called SMN1. The most common mutation in the SMN1 gene within patients diagnosed with SMA is a deletion of a whole segment, called exon 7.1 Neighboring SMN2 genes can in part compensate for nonfunctional SMN1 genes as there is 99% identity between these two genes.2

Other rare forms of SMA (non-chromosome 5) are caused by mutations in genes other than SMN1.3

What are the symptoms of SMA? 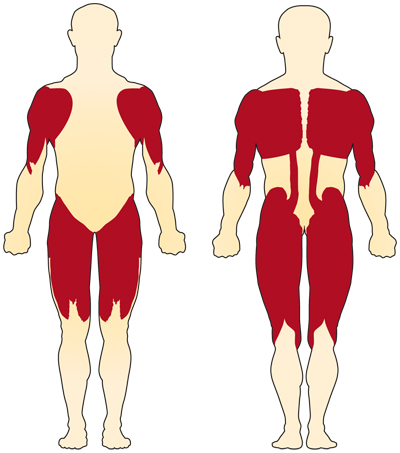 The primary symptom of chromosome 5-related (SMN-related) SMA is weakness of the voluntary muscles. The muscles most affected are those closest to the center of the body, such as those of the shoulders, hips, thighs, and upper back. The lower limbs seem to be affected more than the upper limbs, and deep tendon reflexes are decreased.4

Special complications occur if the muscles used for breathing and swallowing are affected, resulting in abnormalities in these functions. If the muscles of the back weaken, spinal curvatures can develop.

There's a great deal of variation in the age of onset and level of motor function achieved in chromosome 5-related SMA. These are roughly correlated with how much functional SMN protein is present in the motor neurons, which in turn correlates with how many copies of SMN2 genes a person has. Sensory, mental, and emotional functioning are entirely normal in chromosome-5 SMA.

Some forms of SMA are not linked to chromosome 5 or SMN deficiency. These forms vary greatly in severity and in the muscles most affected. While most forms, like the chromosome 5-related form, affect mostly the proximal muscles, other forms exist that affect mostly the distal muscles (those farther away from the body’s center) — at least in the beginning.

For more, see Signs and Symptoms.

What is the progression of SMA?

In chromosome 5-related SMA, the later the symptoms begin and the more SMN protein there is, the milder the course of the disease is likely to be. While in the past, infants with SMA typically did not survive more than two years, today most doctors now consider SMN-related SMA to be a continuum and prefer not to make rigid predictions about life expectancy or weakness based strictly on age of onset.

SMA is the most common genetic cause of mortality in infants.

What is the status of research on SMA?

Research has focused on strategies to increase the body's production of the SMN protein lacking in the chromosome 5-related forms of the disease. Approaches include methods to help motor neurons survive in adverse circumstances.

On Dec. 23, 2016, the U.S. Food and Drug Administration (FDA) approved Spinraza (nusinersen) for the treatment of SMA. Spinraza is designed to treat the underlying defect in SMA, which means it potentially may be effective at slowing, stopping, or perhaps reversing the symptoms of SMA. For more, see Spinraza is Approved.

In May 2019, the FDA approved Zolgensma (onasemnogene abeparvovac-xioi), the first gene-replacement therapy for a neuromuscular disease. Zolgensma is a one-time intravenous (into the vein) infusion for the treatment of pediatric patients younger than 2 years of age with SMA with bi-allelic mutations in the SMN1 gene, including those who are presymptomatic at diagnosis. For more information read FDA Approves AveXis’ Zolgensma for Treatment of Spinal Muscular Atrophy in Pediatric Patients.

For more, see Research, SMA: Full Speed Ahead and In Focus: Spinal Muscular Atrophy (SMA). For stories of families living with SMA, see our SMA stories on Strongly, the MDA blog.

In August 2020, the FDA approved risdiplam (brand name Evrysdi*) for the treatment of SMA in adults and children two months of age or older. Evysdi is an oral medication designed to increase levels of the SMN protein by enhancing production from the SMN2 "backup" gene.