SMA is characterized by the loss of motor neurons, nerve cells in the spinal cord. It is classified as a motor neuron disease. 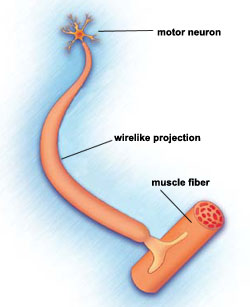 What are the genetic causes of SMA?

A mutation in the SMN1 gene leads to a deficiency of a motor neuron protein called SMN, which stands for “survival of motor neuron.” As its name implies, this protein is responsible for gene expression necessary for normal motor neuron function.

More rarely, a mutation in an X-chromosome gene called UBE1 causes X-linked SMA. The UBE1 gene carries instructions for ubiquitin-activating enzyme 1, which normally helps attach a molecular tag to proteins to mark them for destruction.

Flaws in the cytoplasmic dynein 1 heavy chain 1 (DYNC1H1) gene on chromosome 14 have been found to lead to another rare form of SMA called SMA-LED.

What causes the wide variation in symptom severity seen in SMA?

Normally, SMN1 genes produce full-length and fully functional SMN protein. But when the SMN1 gene has mutations, as in the chromosome 5-related form of SMA, insufficient levels of SMN protein are produced.

A neighboring gene on chromosome 5, called SMN2, also produces SMN protein. Most of the protein made from instructions carried by SMN2 genes is not functional, but a small percentage, around 10 to 15% is functional.

Genetic testing can tell how many SMN2 genes a person has and roughly predict the course of SMA that is likely to result.

SMA severity also may depend on disease modifiers, which don't cause disease but can affect (modify) onset and severity by influencing various biological pathways. Levels of both plastin 3 protein and ZPR1 protein have been identified as modifiers of SMN-related SMA and could become therapeutic targets. In addition, testing for these protein levels could help predict disease severity, and insight into the activities of these proteins could shed new light on disease processes.

What is the inheritance pattern of SMA?

Chromosome 5-related SMA (types 1 through 4) follows an inheritance pattern known as autosomal recessive. (The autosomes are the numbered chromosomes — that is, all the chromosomes except the X and the Y, which determine gender.)

Diseases that are recessive require two gene flaws — usually one from each parent, but occasionally one from one parent and one that occurs as a fetus is being formed. People who have only one gene flaw for a recessive disease are said to be carriers and usually show no symptoms. Often, a family has no idea that some members are carriers until a child is born with a recessive disorder.

If both parents are carriers of the chromosome 5 gene flaw, the risk of each pregnancy producing a child with the disease is 25%. This risk doesn’t change no matter how many children a couple has.

Genetic testing for chromosome 5-related SMA is available for those suspected of having the disease, including unborn babies, and for carriers of the disease. Genetic testing is expanding and changing rapidly, but its implications can be complex. It’s best to talk with a genetic counselor before embarking on testing. (A genetic counseling referral can be obtained through your MDA Care Center or your primary care physician).

It is imperative to diagnose SMA as early as possible, ideally before symptom onset, because delay in treatment can worsen the course of the disease and create permanent damage to motor neurons. The best way to identify SMA before symptoms appear is to screen all newborns for the SMN1 exon 7 deletion. Since Spinraza (nusinersen), a disease-modifying therapy, was approved in 2016 by the US Food and Drug Administration (FDA) and early treatment showed positive outcomes, the secretary of the US Department of Health approved the addition of SMA to newborn screening panels.1 For more information, visit SMA Added to National List of Disorders to Screen for at Birth.

Additionally, SMA can be caused by mutations in the DYNC1H1 gene on chromosome 14. This form is dominantly inherited, meaning that only one DYNC1H1 gene mutation, inherited from one parent, is sufficient to cause the disease.

To read more about the genetics of SMA and genetic testing for this disease, also see: