Muscle cells are embedded in a web-like structure known as the extracellular matrix (ECM). The ECM is a complex mix of molecules, including many kinds of proteins linked to carbohydrates (called glycoproteins). Glycoproteins have multiple roles in the ECM, including transmitting the force of muscle contraction to the skeleton, connecting individual muscle cells to each other, transmitting signals among cells, and promoting development and repair. Many CMDs are due to mutations in glycoproteins themselves, or in the enzymes that create them. One group of CMDs are due to mutations in genes that help glycosylate (add sugar molecules to) the protein alpha-dystroglycan, a key glycoprotein of the ECM.

Loss of glycoproteins due to mutation interferes with normal muscle function. A consequence of most CMD-causing mutations is increased susceptibility to cellular injury from normal contraction, and/or a reduction in the ability to repair damage.

It’s important to note that just because the muscle weakness in CMD starts earlier, CMD isn’t automatically more severe than other forms of muscular dystrophy. The degree and rate of progression of muscle weakness varies with different forms of CMD and from one child to the next.

In the mid-1990s, researchers found that a deficiency of a protein then called merosin and now more often called laminin 211 was the underlying cause of at least some cases of CMD. Merosin normally anchors muscle cells to a structure that encases them (like the skin on a hot dog) called the basal lamina.

Doctors began to classify CMD as either "merosin-deficient" or “merosin-positive.” The gene for merosin is on chromosome 6.

As the 20th century ended, researchers began to suspect that Ullrich’s disease, now known as Ullrich CMD, was caused by a lack of collagen 6, a ropelike protein located in the area where laminin 211 is found.

Collagen 6, which helps support the muscle fiber, probably affects muscle cells via its connection to laminin 211. Laminin 211, in turn, connects to muscle cells via either of two other proteins: integrin or dystroglycan.

Dystroglycan links the outer surface of muscle cells with structures outside them via branches, made of sugar molecules, that protrude from its surface and stick to laminin.

The branch structure helps explain why mutations in so many diverse genes all appear to cause CMD. Each of these proteins contributes in a different way to the process of “sugar-coating” (glycosylating) dystroglycan. Several forms of CMD — such as Fukuyama CMD, Santavuori muscle-eye-brain disease and Walker-Warburg syndrome — arise from defects in these glycosylation proteins.

The illustration below shows the physical relationships among these proteins. 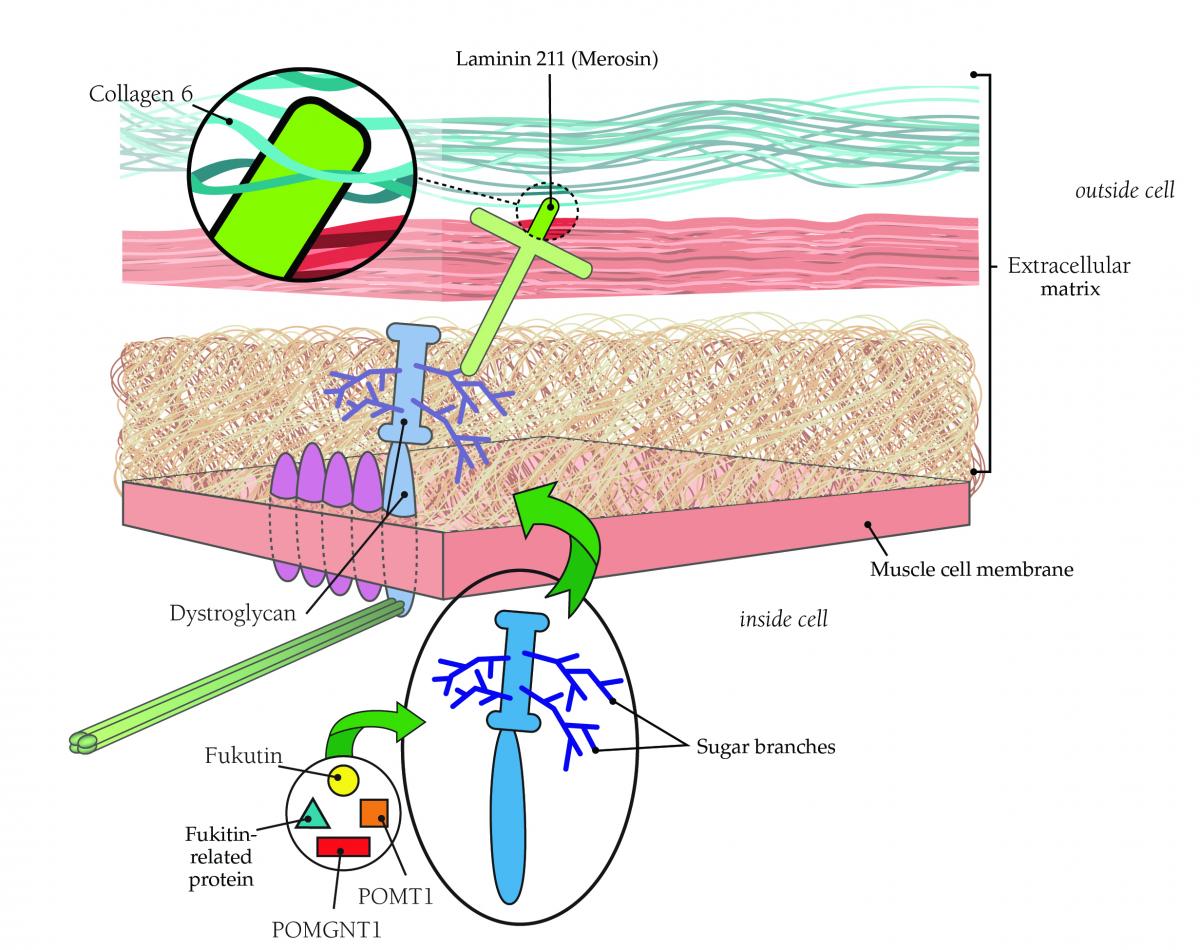 To learn more about the progress that's been made over the years in understanding and classifying the congenital MDs, read Taking Aim at Congenital Muscular Dystrophies: Insights from pediatric neurologist Carsten Bönnemann and Connecting the Dots: Research shows congenital MDs have roots outside cells.

What are the inheritance patterns in CMD?

The CMDs are caused by genetic defects that affect important muscle proteins. Most forms of CMD are inherited in an autosomal recessive pattern.

In brief, if a disease is recessive, two copies of the defective gene (one from each parent) are required to produce the disease. Each parent would be a carrier of the gene flaw but wouldn’t usually have the disease.

If a disease is dominant, then only one copy of the genetic defect is needed to cause the disease. Anyone with the gene flaw will have disease symptoms and can pass the disorder to children.

Many times, MD appears to have occurred “out of the blue,” but in reality, one or both parents may be carriers, unknowingly harboring the genetic mutation. Many parents have no idea they’re carriers of a disease until they have a child who has the disease.

A good way to find out more about these risks is to talk to your MDA clinic physician or ask to see the genetic counselor at the MDA clinic. For more, see Facts About Genetics and Neuromuscular Diseases.