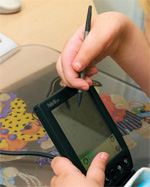 The term congenital muscular dystrophy (CMD) is actually the name for a group of muscular dystrophies united by the fact that muscle weakness begins in infancy or very early childhood (typically before age 2). Congenital diseases are those in which the symptoms are present at or soon after birth.

Most children with CMD exhibit some progressive muscle weakness, although they can have different symptoms, degrees of severity and rates of progression.

This weakness, usually first identified as hypotonia, or lack of muscle tone, can make an infant seem “floppy.” Later, infants and toddlers may be slow to meet motor milestones such as rolling over, sitting up or walking, or may not meet some milestones at all.

Some of the rarer forms of CMD are also accompanied by significant learning disabilities. For more on the specific symptoms of different types of CMD, see Types of CMD.