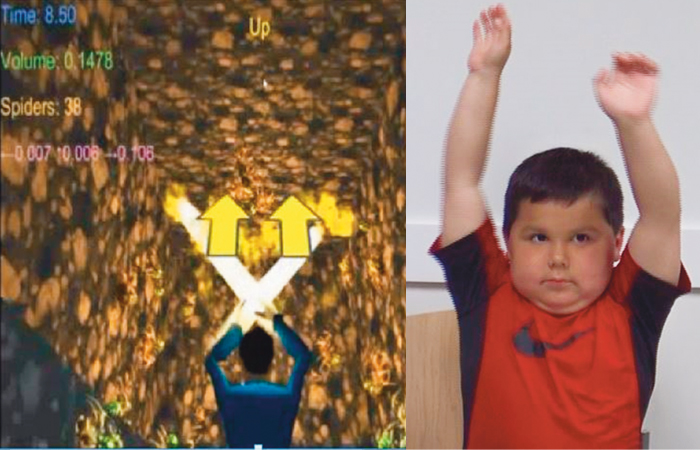 Participating in a clinical trial often means meeting some stringent requirements. One common requirement is the six-minute walk test, which measures the distance walked in six minutes and which may be used to help determine whether a drug is having an effect. This requirement can be a challenge for some individuals with neuromuscular diseases.

Because of this, the researchers at Nationwide Children’s began to test a new technology that could measure progression for participants with ambulatory issues through a video game. Using Microsoft’s Xbox Kinect camera tracking system, the researchers created the ACTIVE-seated system, which tracks arm movements.

“It measures participants’ abilities based on their function,” Lowes says. “We think it can be used for just about anything where the participants have trunk or arm limitations.”

To play the game, participants sit in a chair where they can see a computer monitor and the Xbox Kinect camera facing them. Unlike most video games, there is no controller involved; the players simply move their hands around the space in front of them.

“My favorite thing is that you get to smash spiders and knock out gems,” says James, a 9-year-old with Duchenne muscular dystrophy (DMD), who has played the game about 10 times over the past two years through his participation in clinical trials.

James is a fan of video games and plays his Xbox at home. His favorite game is Madden NFL, but he says he actually likes playing with the ACTIVE-seated technology better.

“It’s really fun, and it’s easier using my hands than the controller,” he says. “I hope that other MDA clinics get it for their kids.”

For more information about the ACTIVE-seated technology project, you can contact Linda Lowes at Linda.Lowes@nationwidechildrens.org. The researchers at Nationwide Children’s Hospital are also interested in speaking with programmers in the MDA community who might be able to volunteer time to help improve the game’s graphics.

Designed to help you locate ongoing clinical trial participation opportunities across the country, the MDA's web-based Clinical Trials Finder Tool asks a series of questions to pinpoint trials specific to disease type, progression, age and other eligibility criteria. In just a few minutes, you can gain access to vital research that directly impacts you and families like yours. Check it out today!