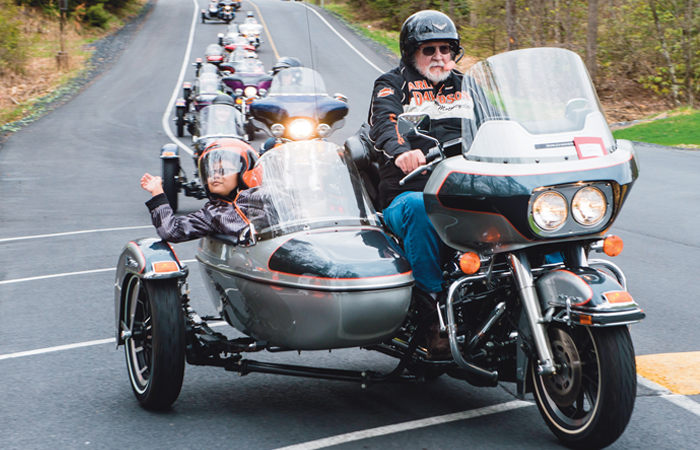 When Jon Burcaw attended his first MDA Ride for Life in 1999 with his son Shane, who has spinal muscular atrophy (SMA), they were simply there to support the Harley-Davidson riders raising money and awareness for MDA. Little did he know that by 2007 he would be known as “Smilin’ Jon” and have his own Harley with a special sidecar that makes entering and exiting easier for individuals with disabilities. “[My first Ride for Life] made me smile, and I’ve been pretty much stuck that way ever since,” Jon says.

MDA and Harley-Davidson Motor Co. have been affiliated since 1980, and more than 100 MDA-Harley Davidson rides are held each year across the country to benefit MDA families. MDA Ride for Life began in 1988, after members of the Eastern Harley-Davidson Dealers Association decided to combine their separate fundraisers supporting MDA into one large event. The event, which takes place over two days in different venues throughout Pennsylvania, features its namesake motorcycle ride, a concert and a parade.

“As the event has evolved, we’ve seen a group of fundraisers who get involved and really take the cause to heart,” says Carol Schaeffer, owner of Schaeffer’s Harley-Davidson in Orwigsburg, Pa., and one of the dealers who participated in the first MDA Ride for Life. “Through the years, they’ve been raising more and more money. In 1988, we raised something like $10,900, and last year we raised about $253,000.”

“The Sidecar Kings was written to pay tribute to the Schaeffers, my fellow riders and MDA campers,” says Jon. “Without these folks there would have been no book and I would not have been a witness to the amazing goodness that comes when you put an MDA camper into a Harley sidecar. It is a thing of magic.”

Jon has seen the magic of helping a child with a neuromuscular disease to live unlimited through his son Shane, who was diagnosed with SMA as an infant, and has attended MDA Ride for Life and other events at Schaeffer’s Harley-Davidson since he was a child. Shane is now a 24-year-old author, entrepreneur and motivational speaker.

“It’s always great to see the Harley-Davidson riders who do so much to fundraise for the cause,” says Shane. “I remember when I was little, my favorite part was the exorbitant amount of candy I would come home with each year.”

The Schaeffers and the Burcaws both look forward to this year’s event, which will mark the 30th time Harley- Davidson riders and the MDA community have come together for Ride for Life. They’ll be joined by hundreds of other supporters and riders, some of whom are personally connected to MDA and others who have developed bonds with MDA families through the ride.

“We couldn’t do this without our riders,” says Schaeffer. “And the thing that really spurs them to come out is how attached they’ve become to MDA families like the Burcaws. In some cases, we’ve watched boys with Duchenne muscular dystrophy come at 6 years old and be walking, and years later they end up in a wheelchair. And that speaks to what we want to do [with Ride for Life]: raise money for a cure to get them out of the wheelchairs.”

Andrew Conner is a writer and editor for Quest. 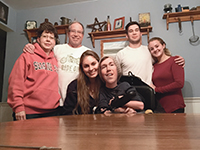 While Shane Burcaw still attends MDA Ride for Life with his father, Jon, he is also busy traveling the country promoting his book and charitable organization, both named for a blog Shane started as a college student, called Laughing at My Nightmare.

“I fell in love with writing in high school,” he says. “With writing and humor, I was able to begin breaking down some of the social barriers that society creates for people with disabilities. … The blog was an extension of that.”

As his blog gained traction online, Shane began to receive hundreds of messages every week from people thanking him for helping them overcome their personal struggles with his unique and funny stories. Shane saw this popularity as an opportunity and created the Laughing at My Nightmare organization to help support individuals with neuromuscular diseases.

“Creating an effective, sustainable organization is no small task, which we quickly learned,” Shane says of the entrepreneurial experience. “Luckily, we’ve been surrounded by amazingly passionate individuals who have assisted and guided us along the way. I’m so proud of how far we’ve come.”

Shane also travels the country with his cousin, Sarah, giving motivational speeches. In the past two years, they’ve participated in more than 80 speaking engagements.

“Our talk shares the idea that positivity is an effective way to overcome adversity,” he says. “We also speak about embracing our differences, inclusion and promoting a better understanding of disability. I use funny stories from my experience with disability to illustrate these concepts.”

In addition to sharing his message, Shane enjoys the change of pace and scenery that traveling provides.

“One of my favorite experiences was flying across the country for a few speaking engagements in San Francisco,” he says. “I had never been to the West Coast, so it was not only awesome to explore the beautiful city, but our speeches also went really well. Plus, I survived air travel with my wheelchair, so it was an all-around success.”

The 30th annual MDA Ride for Life kicks off May 6 from the Reading Fairgrounds in Leesport, Pa. To learn more and get involved, visit mdarideforlife.org.