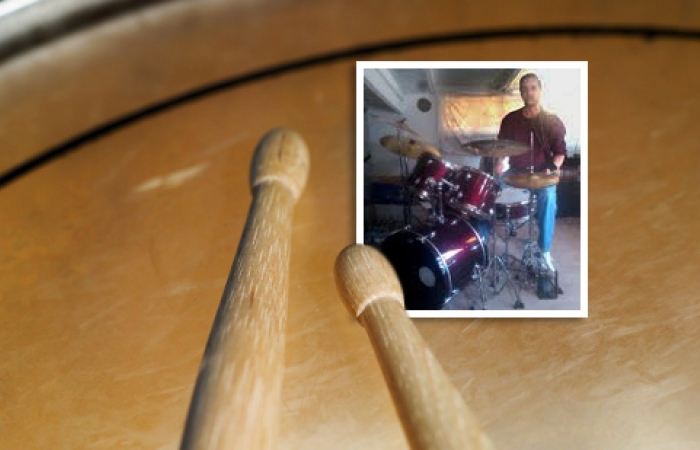 John DeGeorge is an IT specialist by day and drummer by night who had to give up drumming for a time due to weakness caused by facioscapulohumeral muscular dystrophy. After a period of depression, DeGeorge was inspired to devise some innovative methods and low-tech adaptations that have allowed him to keep on playing.

John DeGeorge, 50, of Los Angeles, works as an IT (information technology) compliance consultant to make a living, but he lives to play the drums.

“I think I was born with an interest in making music, or making noise,” he says. Being the son of a former drummer with the Glenn Miller Orchestra, such a passion for music must be in the genes.

Another trait passed through John’s genes, unfortunately, is facioscapulohumeral muscular dystrophy (FSHD), a disease that also has affected his father, grandmother, three uncles, an aunt and several cousins.

John’s first FSHD symptoms manifested themselves when he was 4. He remembers “standing in front of a mirror, trying to form a small 'o' with my lips because I wanted to whistle.” His lips wouldn’t cooperate.

At 19, he lost all strength in his left calf. “I think I must be a lot luckier than others with MD because as far as debilitating diseases go, mine isn’t so bad. But about every eight to 10 years, I lose another major muscle and have to change the way I do something.”

The most important thing that John has had to re-learn during his FSHD’s progression is playing the drums, which became more and more difficult around age 40.

“I noticed that my arms, wrists and hands would tire after only one fast song, like Billy Idol’s ‘White Wedding’ or Led Zeppelin’s ‘Rock and Roll.’ I’d have to play a slow song after one of those, but I just thought it was because I was out of practice.” When John stood up from his drums, though, the fatigue he felt — and still feels today — made it obvious that something was wrong.

After losing his left bicep at 48, things took a downward turn. “The day I sat down to practice and realized that I could no longer play was a bad day for me.”

John remembered watching his father lose the ability to indulge his musical passion. “The memory of my dad’s stoicism when he faced his loss gave me the strength to accept the fact that my days as a musician with a disability were over,” John says. “On that day, I became just a guy with a disability.”

So what spurred John to return to music? It was when he attended a concert by the '80s pop metal band, Def Leppard. In 1984, the band’s drummer, Rick Allen, lost his left arm in a car accident — but kept on rocking with the help of a specially adapted electronic drum kit.

“My life changed when I saw Rick Allen’s huge smile on the giant screens as he played with only one arm,” John explains. “One month later, I was a 'struggling musician with a disability.' Three months later, I overcame that disability, and now think of myself the same way I did 10 years ago, which is simply as 'a musician.'”

Just like Rick Allen — or “Thunder God” as he’s called by his fans — John has adapted his drum set to compensate for his disability. Although in John’s case, those adaptations aren’t nearly as extensive as one might expect.

“The kit is the exact same size as the set that my dad and I had. The only difference is that I installed a double bass pedal five years ago. I bought some steel and turned my heel plate pedals into longboard pedals. This still wasn’t high enough, so I attached a 1-inch wooden dowel to the top of each pedal. These dowels are what the balls of my feet press down on when I strike the bass pedals. When I fatigue and can’t press down the dowels accurately, I can strike down with my heels for a while instead, because of the long board enhancements I made.”

John says that practicing with these modifications actually makes his calves feel slightly stronger. “I also noticed that the electrical impulses I felt going to my calves became more controllable and, eventually, almost normal.” Recalling a recent jam session, he goes on to enthuse, “Last night, my feet were flying faster than they ever have before — even when I was in my 20s. I wonder how fast my pedal design would let me play if I didn’t have MD.”

Because John also has weakness in his left wrist, he’s engineered a simple-yet-effective sling to hold his hand in place. He describes it as, “a bungee with a neck pad that connects to a Velcro strap around my left wrist. When my arm is relaxed, my left hand hangs perfectly above my snare drum, so I can play with my hand and wrist. Without the sling, my hand just plops down on my left knee or on my snare head, because I have no bicep to hold it up in place, just like Dad’s hand did.” Since this sling also allows him to move his arm from side to side, John is now able to play his bongos.

Eventually, John hopes to form a band — “Access Rock” — made up of other disabled musicians, but at the moment, his IT job keeps him in Silicon Valley, six hours away from his home in L.A. that he shares with his “wonderful live-in girlfriend who keeps me healthy and happy,” and their four dogs.

So how does he handle the stress of a disability, career and maintaining a long-distance relationship? Guess.

“Since I can’t run or do aerobics anymore, I don’t have many fun ways to exercise and relieve the stress of life and living with a disability. After about eight songs of exercises, my feet and hands are moving with speed and accuracy, so I beat the hell out of my drums as if I were performing live onstage with Rick Allen.”

In the end, that’s what rock and roll is all about.

Michael P. Murphy, a freelance writer who specializes in both thrillers and science fiction, has spinal muscular atrophy (SMA) and lives in Wisconsin.