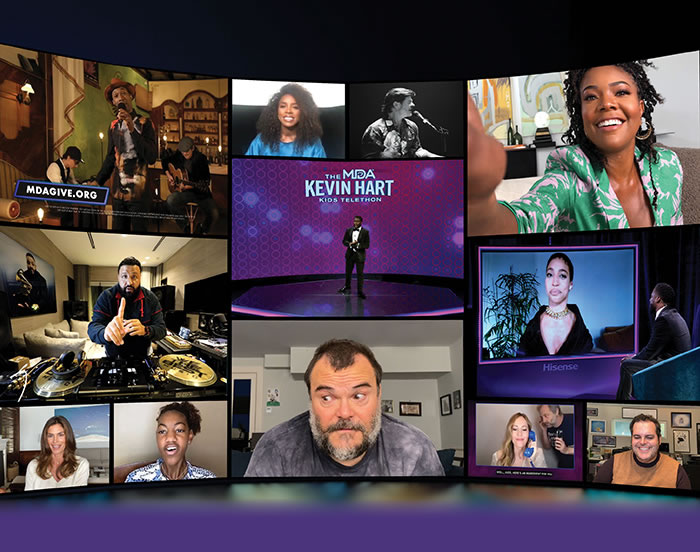 A successful debut for The MDA Kevin Hart Kids Telethon

On Oct. 24, actor and comedian Kevin Hart, dozens of his celebrity friends, and the MDA community joined together to raise funds for research, care (including Summer Camp and educational programming), and advocacy during The MDA Kevin Hart Kids Telethon.

“This was an incredible experience — bringing the work of the Muscular Dystrophy Association forward,” said Kevin, who hosted the two-and-a-half-hour live event. “It’s been an honor to collaborate with MDA and educate the public about supporting people with disabilities. We are all in this together.”

Tuning in via LOL Network platforms and social media channels like YouTube, Facebook, and TikTok, people worldwide streamed the reimagined event for entertainment, comedy, and musical performances by celebrities including actress Gabrielle Union-Wade, model Cindy Crawford, actor Josh Gad, and DJ and record producer DJ Khaled, to name a few, alongside our MDA advocates and Care and Resource Center teams. Among the moments:

A celebration of community and hard work

Viewers also got an inside look at MDA’s essential work through profiles of the people MDA’s mission serves: families living with neuromuscular disease, advocates for the disability community, and researchers developing therapies. Kevin took time to recognize the impact of MDA partners such as the International Association of Fire Fighters (IAFF), Dutch Bros Coffee, Jiffy Lube, and the National Association of Letter Carriers (NALC).

Lynn O’Connor Vos, president and CEO of MDA, expressed her gratitude for the show and for the opportunity to tell incredible stories about the MDA community. “The money we raise tonight is going to go a long way, and we promise to keep on pushing the envelope for accessibility, independence, and equality for all people with neuromuscular disease,” she said.

The evening wrapped up with the MDA 70th Anniversary Show, hosted by TV personalities Nancy O’Dell and Jann Carl and with appearances from more celebrity guests honoring 70 years of progress. This hour of extended programming celebrated members of the neuromuscular disease community and revisited memorable moments from past telethons.

Complementing the telethon, and building up the excitement, was the MDA Let’s Play for a Cure gaming streamathon. This live-streaming event, hosted by DJ and gamer Zedd, brought the MDA community together in the weeks leading up to the telethon and during the event to enjoy giveaways, surprise guests, and video games while raising money to support MDA’s mission. The community continues to game year-round. Join on Discord or at mda.org/lets-play.

You can watch the telethon on the LOL Network on YouTube and the MDA 70th Anniversary Show on MDA’s Facebook page.