MG: Can the Immune Response Be Tamed? 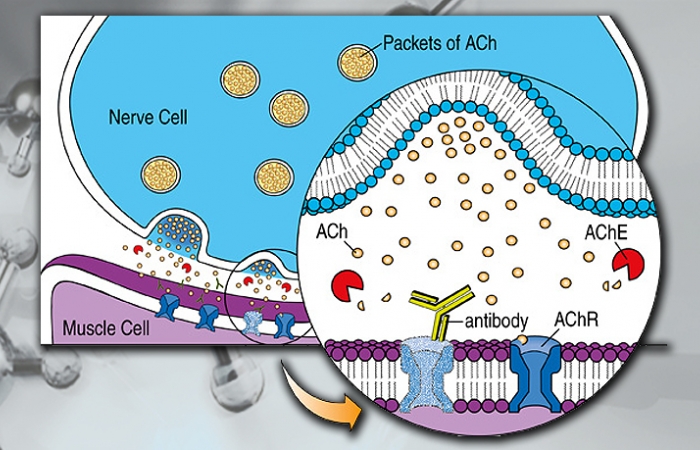 It can start with nothing more than a drooping eyelid or a slight slurring of speech, either of which can come and go and improve with rest. But it can progress, often gradually over weeks or months, to affect all the voluntary muscles, including those controlling breathing. Weakness may be minimal early in the morning after a good night's sleep and worsen throughout the day, especially after periods of activity.

In the past — and even occasionally now — the condition was thought to be psychological in origin, related to depression or anxiety, and patients were steered toward psychotherapy.

But today we know that this disease — myasthenia gravis (MG) — is not psychological in origin, but results from a misguided attack by the body's immune system against some of its own tissues; namely, the neuromuscular junctions, the places where nerve fibers send out activating signals and muscle fibers receive them.

This article takes a look at what we currently understand about MG, and it looks at the MDA-funded research seeking to extend that knowledge and develop more effective treatments for this difficult disease.

Since the 1970s, it's been understood that most MG is due to the immune system's mistaken attack on multiprotein structures calledacetylcholine receptors, docking sites on muscle fibers that receive a chemical called acetylcholine from nerve cells. Normally, the presence of acetylcholine causes a muscle fiber to contract, allowing muscle activity to occur.

In most cases of MG, the immune system's inappropriate target is these docking sites. An immune response, in the form of immune system proteins called antibodies, blocks or destroys the acetylcholine receptors, preventing them from receiving the "go" signal from acetylcholine.

In fact, MG is a classic autoimmune disease, a type of disorder in which the body produces an immune response against itself.

These days, it's known that the acetylcholine receptors are the most common but not the only target of the immune system in MG. In some people with MG, the target is a protein known as muscle-specific kinase, or MuSK. In still others, it's a protein called LRP4. Symptoms are similar in all three types of MG, because the acetylcholine receptors, MuSK and LRP4 all play roles at the neuromuscular junction, and when they're blocked or damaged, they can no longer make sure that signals from the nervous system get through to muscles.

(Note: There are some forms of myasthenia -- weakness due to problems at the neuromuscular junctions -- that are notautoimmune but instead are genetic. These are known as congenital myasthenic syndromes. Treatments that modulate the immune system are not used to treat these forms of myasthenia.)

For several decades, the mainstays of treatment for MG have focused on two goals:

Both those strategies can control the disease to some extent, but usually not completely. And they both — particularly the immunosuppressants — come with unwanted side effects.

The challenge in MG has been to develop a treatment that targets only the part of the immune system that's misbehaving — the part that's attacking the neuromuscular junction proteins — leaving the rest of the system intact to perform its normal function, which is protecting the body from bacteria and viruses.

Two of the current MG grants are to evaluate the possibility that granulocyte-macrophage colony-stimulating factor — GM-CSF — may provide a more nuanced approach to changing the immune system than currently available drugs.

Another grant investigates the possibility that blocking activation of specific proteins that are part of the complement system — a branch of the immune system — may bring MG under control without the side effects of currently available medications.

And yet another is studying the use of a "decoy" that distracts the immune system from its target.

Some of the remaining current MDA funding for MG is going toward understanding the recently identified forms of the disease that are caused by an immune response to either the MuSK or the LRP4 proteins.