Journeys of a Lifetime 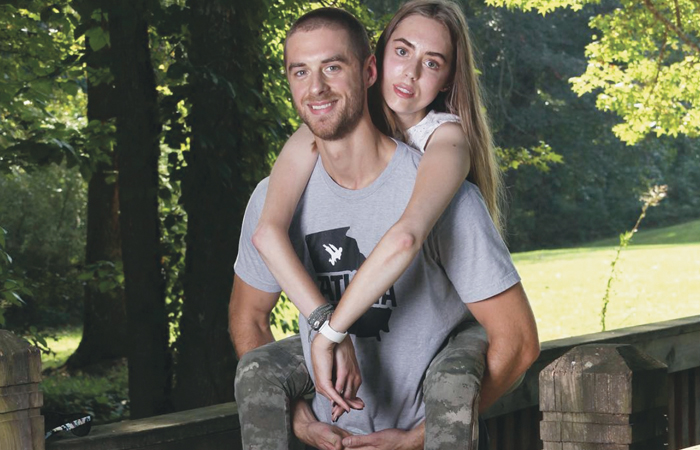 Carden Wyckoff, a 24-year-old professional with facioscapulohumeral muscular dystrophy (FSHD), went on her first piggyback adventure in 2015 when her brother Spencer carried her on his back through the Reebok Spartan Sprint, a tough three-mile obstacle course. After their second Spartan race in 2016 — and after Spencer appeared on national TV on “American Ninja Warrior” — Carden and Spencer were approached by a friend who had co-founded the travel company Vestigo.

“He said, ‘I want to partner with you guys and see you tackle the Appalachian Trail,’” says Carden, who works for a large tech company in Atlanta.

Their goal was to do the 21-mile section of the trail in Georgia, which is seven times longer than the Spartan Sprint. Although they had never done anything that demanding, Carden jumped at the opportunity and began planning the hike. In October 2016, they set off.

“It was the most remarkable experience,” Carden says. “The camaraderie on the trail and the teamwork were amazing. We met a lot of people on the way. Our story got out when we were on the trail, and people would hike to find us. People found us and said they wanted to be a part of our journey. That was really cool.”

With the exposure on social media and in local news, Carden felt she had an opportunity to tell more people about FSHD and created piggybackadventures.com.

“It’s a way to raise awareness and bring in individuals to help out and be a part of that mission,” she says. “And so now there’s this expectation [that we’ll continue doing adventures].”

Carden doesn’t plan to let anyone down. She and her brother are planning to take on Mount Kilimanjaro in Tanzania this October with other friends and family.

“It’s been a dream of mine to go to Africa, and I really enjoy wildlife,” Carden says. “What better way to experience it than to hike the tallest mountain on the continent with a bunch of my friends and family?”

Climbing Mount Kilimanjaro offers some significant challenges compared to the Appalachian Trail, but Carden and her crew are already preparing. Carden sees a connection between her love of planning for trips like these and her love of advocating for people with disabilities.

“Fun for me involves things like Piggyback Adventures,” she says. “I love planning and traveling and breaking down those barriers and redefining what disability means.”

While studying at the University of Georgia in Athens, Carden, along with some of her peers, fought to make the university’s famous Arch, which many students stand underneath for photos after graduation, accessible to everyone. She continues this advocacy in her daily life and documents it on her Instagram page, where she often posts photos and videos of curb cuts in Atlanta that provide better accessibility under the hashtag #EqualAccess.

Learn more about Carden’s upcoming adventures at piggybackadventures.com, and check out her Instagram page where she advocates for better accessibility @cardenofmilk.

As Carden Wyckoff prepares to climb Mount Kilimanjaro later this year, Nicki Hudson made that challenging journey in 2016. Hudson, who was diagnosed with Charcot-Marie-Tooth disease (CMT) at age 12, made the trek partly to show her 7-year-old daughter, who also has CMT, that nothing can stop her from reaching her goals. Read the full story titled No Mountain Too High to learn more.