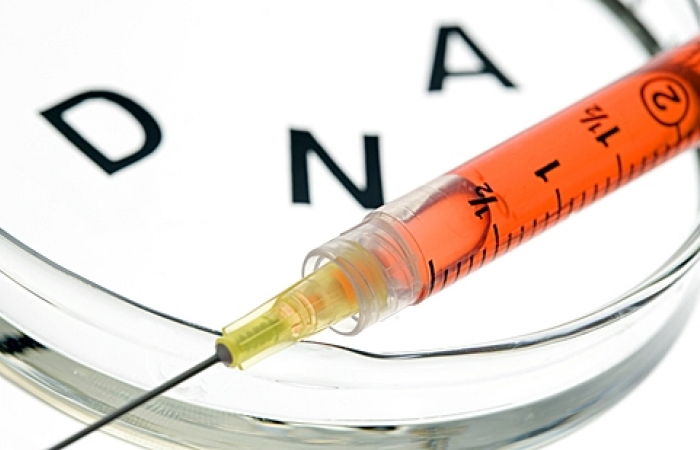 Scientists at five U.S. institutions have successfully used gene therapy to improve muscle function in a single human subject with a hereditary form of inclusion-body myositis (IBM) caused by mutations of the GNE gene. Study results were published online March 30, in the Journal of Gene Medicine.

The results demonstrate positive "proof of principle" that the investigators' strategy for insertion of a normal GNE gene is safe and that the resulting GNE gene activity can increase strength and muscle function in a human with the GNE-related form of hereditary IBM.

IBM due to mutations in the GNE gene usually begins to show up when people are in their 30s. Affecting both males and females, it causes slowly progressive weakness in many muscles. It takes its name from the presence of "inclusion bodies" — abnormal clusters of chemical substances — found in the muscle fibers. The underlying molecular defect in this form of IBM is thought to be an abnormal combination of sialic acid with muscle proteins.

To deliver the GNE gene to the muscle, the researchers created a GNE gene "lipoplex" — a combination of lipid (fat) molecules and the genetic instructions for the GNE gene. The gene contains the genetic instructions for the GNE protein, an enzyme responsible for determining production levels of sialic acid, a crucial multifunctional molecule that resides on cell-surface membranes.

The researchers injected the treatment into muscles in the right and left wrists and into the left biceps muscle of a 40-year-old woman with hereditary GNE-related IBM.

She first received a single intramuscular injection to a wrist muscle in her left arm, followed by a series of four injections spaced evenly over the wrist and biceps muscles.

The trial participant completed muscle strength tests using a handheld testing device to determine baseline measurements prior to testing; at one and two days after each injection; and monthly.

The investigators also analyzed the health of the muscle, the level of GNE activity, and levels of sialic acid production, via muscle biopsies performed both prior to injection and at three and 30 days after injection.

The treatment proved to be safe, producing only a low fever and mild, temporary pain at the injection sites.

Study results showed an initial significant increase in strength in the injected left wrist muscle, followed by some decline in strength three months after injection. At five months, readings were similar to those taken before treatment. Strength increased similarly in the injected muscle in the right wrist, but measurements returned to pretreatment values in this muscle after only two months.

The biceps muscle showed no improvements in muscle strength after injection. Study team member John Nemunaitis, executive medical director at the Mary Crowley Cancer Research Centers in Dallas, explained, "There was no significant muscle left in the biceps. It had already deteriorated to predominantly scar tissue, which is an end-stage result of hereditary IBM."

To see if the injections to the wrists had any far-reaching effects, the investigators tested the strength of 30 other muscle groups in the woman’s body, including in the neck, shoulders, legs and arms. They found short-lived increases in strength of muscles both near and far away from the injected muscles.

"Some showed slight improvement," Nemunaitis said, "but most were stable without function because of the end-stage severity of her disease."

Meaning for people with IBM

These results bode well for gene transfer therapy in this particular form of IBM. However, the researchers note, further studies are necessary to determine the specific functions of the GNE protein and its role in determining the rate of production of sialic acid.

Further development of the GNE-lipoplex construct is under way for a planned phase 1 clinical trial, Nemunaitis said.

The researchers plan to evaluate the safety and effectiveness of an intravenous (injection into a vein) delivery method, which would allow for systemic distribution of the genetic material, in animal models of hereditary IBM and in individuals with less severe symptoms of GNE-related IBM than were displayed by this first participant.