Exon Skipping in DMD: What Is It and Whom Can It Help? 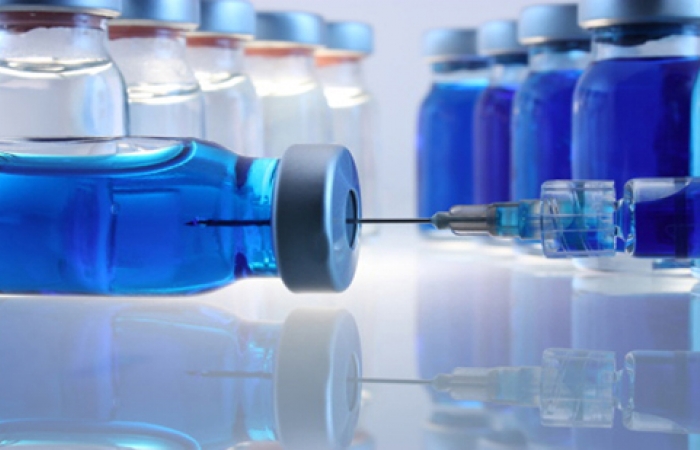 Exon skipping is a strategy currently being developed for Duchenne muscular dystrophy (although it may have application to other genetic diseases down the line) in which sections of genetic code are “skipped,” allowing the creation of partially functional dystrophin, the muscle protein missing in DMD.

Exon skipping is not a cure for DMD, but potentially could lessen the severe muscle weakness and atrophy that is the hallmark of this disease, making it more like Becker muscular dystrophy (BMD).

Laboratory development of exon skipping began in the 1990s and has received significant funding from MDA since then.

The final recipe for dystrophin, known as dystrophin messenger RNA, contains only exons.

By the late 1990s, molecular biologists began to realize that they might be able to take advantage of this natural cellular splicing process to change extremely damaging genetic errors (mutations) into less damaging ones, similar to the mutations found in BMD.

The type of gene flaw that usually leads to BMD is called an in-frame deletion mutation (see illustration below). This type of mutation allows cells to construct shorter-than-normal dystrophin protein that’s still somewhat functional, leading to a higher level of muscle function than occurs in DMD. 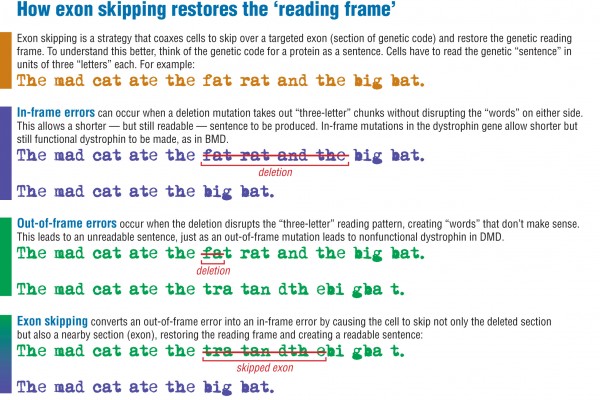 DMD-causing mutations generally are out-of-frame deletion mutations. An out-of-frame mutation disrupts the cell’s ability to “read” the RNA beyond the point where the error first occurs. This type of error leads to a nearly complete deficiency of full-length dystrophin.

For example, skipping exon 51 of the dystrophin gene could restore the “reading frame” in patients who have specific out-of-frame deletions in some dystrophin exons.

The antisense molecule keeps the cell from including exon 51 when it is reading the genetic instructions, thus restoring the reading frame. Skipping exon 51 results in a shorter but “in-frame” set of RNA instructions, leading to a shorter, but still relatively functional, dystrophin protein.

Mutation has to be identified

Many families have been told that their child with DMD has a mutation in the dystrophin gene, but not all of them know exactly where the mutation is and whether it’s a deletion (missing DNA) or another type of mutation. That information has to be known to participate in trials of exon-skipping drugs.

Genetic testing, usually performed on a blood sample, is needed to pinpoint the exact nature and location of a dystrophin mutation. Some clinical trials provide this type of testing, and some do not. An MDA clinic physician or genetic counselor can help families obtain and interpret the results of genetic testing.

Plans are to cast a wider net

For now, biotechnology companies are working on targeting exons that are likely to help the greatest number of individuals. AVI BioPharma is also developing a drug that targets exon 50, and the Dutch company Prosensa’s pipeline includes compounds targeting exons 44, 45, 53, 52 and 55. The company is conducting a trial in Europe of PRO044, the exon-skipping drug aimed at exon 44. (Enter NCT01037309 into the search box at https://clinicaltrials.gov for details of this trial.)

Some researchers hope that “cocktails” of antisense oligonucleotides that target multiple exons can be developed that might help a substantial portion of the DMD population.

For now, changing the way RNA is processed through drugs that cause exon skipping in diseases like DMD — and exon inclusion in other diseases, such as spinal muscular atrophy (SMA) — are still in their infancy.

MDA is devoting substantial resources to investigating and developing these strategies.