Epigenetics: Above and Beyond Genes 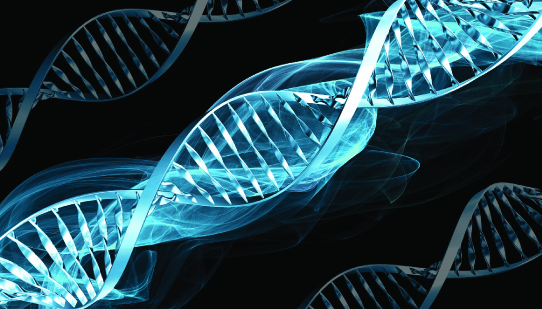 Slip the word “genetics” into a casual conversation and you likely won’t get too many questioning looks.

Most people basically understand that “genetics” refers to DNA and genes, the blueprint of life, the code that determines whether someone has blue eyes or green. Many are familiar, too, with the idea that “genetics” can cause a variety of health conditions: diabetes, breast cancer, muscular dystrophy and other neuromuscular diseases.

What many aren’t familiar with is the fast-growing area of scientific investigation called epigenetics — the study of the mechanisms that govern the activity of genes. The genome (complete set of genes) may contain the codes for making a healthy human, but like a ghost in the machine working a set of on-off switches, the epigenome regulates the way genes behave, or “express” themselves.

The epigenome has gained recognition as a key player in human development and disease, and a possible target for scientists looking to develop therapies and cures for neuromuscular and other diseases.

A code of its own

To understand how the epigenome exerts control, it’s helpful to review some basic biology.

Each person’s DNA contains the initial code, or “recipe,” for all proteins, the essential molecules that play various roles in nearly every cellular process. Long strands of DNA wrap around some of these proteins to form chromatin, the material that makes up the chromosome.

When a cell receives signals directing it to manufacture a specific protein, it exposes the gene that contains that protein’s recipe, as if it were opening the right page in a cookbook. Cell machinery then reads and transcribes the recipe into an RNA code. Multiple steps in RNA processing then lead to the final code, messenger RNA (mRNA), from which the protein is made.

It’s in these numerous steps of protein production that the epigenome exerts its influence.

The epigenome provides a higher level of biochemical control — a code of its own –- that turns genes on and off, regulating if and when genetic instructions are carried out. By directing the activation and inactivation of particular sections of DNA, the epigenome guides protein production, resulting in the development and function of specific types of cells, such as those  that build a heart, brain, lung or bone.

“Unlike the genome, which is one per person, every different cell in the human body has a different epigenome,” said Joseph Ecker, professor and director of the Genomic Analysis Laboratory at the Salk Institute. “There are at least 200 distinct cell types, and more likely there are thousands, if you consider the brain and other less understood organs.”

Although scientists have a good idea of the role that genetics plays in human disease, “we really know very little about how changes in the epigenome are linked to diseases,” said Ecker. However, “there is good evidence that the epigenome plays an important role in how genes are expressed.”

The epigenome in control

The epigenome uses a number of strategies to control whether and when DNA and RNA are read by cells. Two of the most studied are DNA methylation and histone modification.

DNA methylation is a process whereby a chemical “tag” known as a methyl group attaches to a DNA molecule. The addition of this tag attracts certain proteins that compact the tagged section of DNA, leaving it closed and inaccessible to the cell machinery that copies DNA into RNA.

Importantly, methylation patterns can be passed on to daughter cells. When DNA is replicated (copied and made into additional DNA), the methylation status is maintained in the cell and in the organism, and passed down to later generations of cells.

Histone modification involves changes to the structure of chromatin, the combination of DNA and proteins, some of which are called “histones,” around which the DNA strands are wrapped.

Chromatin’s power to influence gene expression lies in its configuration into one of two states: tightly compacted and condensed, or open and expanded. When chromatin is closed, access to genes is restricted. The genetic code is unable to be read and transcribed into RNA, and the gene is inactive. Open chromatin allows the cell’s machinery to access the genes and make proteins.

Epigenetic signaling can change chromatin structure from open to closed, or closed to open, and thus direct the output or silencing of genes. It does this through chemical modification of the histone proteins.

In chromatin methylation/demethylation, methyl group tags are either attached or removed from histone proteins. Usually, the addition of methyl groups to histones causes them to close, rendering the DNA coiled around them inactive and, thus, silent. But in some cases, depending on where the methyl group attaches, methyl groups can have the opposite effect.

In chromatin acetylation/deacetylation chemical “flags” called acetyl groups are added or removed from histone proteins.  Acetyl flags on histone proteins signal the cell that DNA is open and ready to be read.

Studies have shown the epigenome can be affected by diet, environment, stress, physical activity (or lack thereof) and other factors, including, of course, intentional manipulation through chemical compounds designed for that purpose.

Emerging knowledge about epigenetic control hints at the possibility of understanding the ways in which different aspects of our lives affect our health.

Although the study of epigenetics continues to make gains, a complete understanding of the processes flipping the switches and activating or deactivating our genes is still a long way off. The hope is that, in time and with drugs that function through manipulation of the epigenome, scientists will be able to block or reverse any number of human diseases.

“The good news is that, unlike DNA mutations in the genome, there is potential to reverse the abnormal epigenetic states of cells using drugs that target the epigenome,” said Ecker. “Although this research is at an early stage, I think it holds great promise for treatment of diseases where epigenetics plays a role.”