What is Friedreich's ataxia? 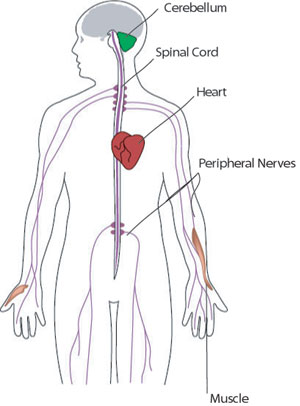 First described by German physician Nikolaus Friedreich in 1863, Friedreich’s ataxia (FA) is a neuromuscular disease that mainly affects the nervous system and the heart.

FA affects about one in 50,000 people worldwide, making it the most common in a group of related disorders called hereditary ataxias. It shouldn’t be confused with a group of diseases known as autosomal dominant spinocerebellar ataxias.

What are the symptoms of FA?

FA's major neurological symptoms include muscle weakness and ataxia, a loss of balance and coordination. FA mostly affects the spinal cord and theperipheral nerves that connect the spinal cord to the body’s muscles and sensory organs.

FA also affects the function of the cerebellum, a structure at the back of the brain that helps plan and coordinate movements. (It doesn’t affect the parts of the brain involved in mental functions, however.)

FA's effects on the heart range from mild abnormalities to life-threatening problems in the heart’s musculature. For more, see Signs and Symptoms.

FA is a hereditary disease, caused by a defective gene that can be passed down through a family. Mutations in the gene that carries instructions for a protein called frataxin result in diminished energy production in cells, including those of the nervous system and heart. For more, see Causes/Inheritance.

What is the progression of FA?

Onset is typically between 10 and 15 years of age, but FA has been diagnosed in people from ages 2 to 50. FA progresses slowly, and the sequence and severity of its progression is highly variable. Although there's no cure for FA as yet, treatments exist for cardiac symptoms, and there are ways to manage ataxia and muscle weakness. Many people with FA lead active lives, going to college, holding careers, getting married and starting families.

What is the status of FA research?

Scientists are making definite progress toward better treatments for FA. In clinical trials, certain drugs have shown promise for slowing and even reversing the cardiac abnormalities in the disease. For a complete discussion of current research in FA, see Research.

See In Focus: Friedreich's Ataxia for a 2011 report on the status of FA research and treatments.