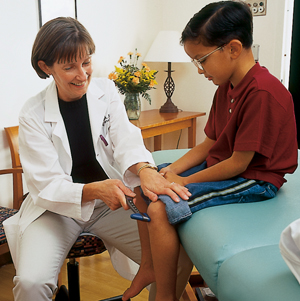 Friedreich's ataxia (FA) typically has its onset in childhood, between 10 and 15 years of age, but has been diagnosed in people from ages 2 to 50. A later onset is usually associated with a less severe course.

A neurologist will use several tests to reach a diagnosis of FA. Typically, diagnosis begins with a basic physical exam and a careful assessment of personal and family history.

During the physical exam, the neurologist is likely to devote special time and attention to testing reflexes, including the knee-jerk reflex. Loss of reflexes occurs in most people with FA.

Perhaps most importantly, cells in the blood provide DNA (genetic material) that can be used for genetic testing. Tests for frataxin mutations are highly reliable and can be used to confirm or exclude a diagnosis of FA in almost all cases. The tests also can be used prenatally and to determine carrier status (see Causes/Inheritance). For more on getting a definitive genetic diagnosis, see The Genie's Out of the Bottle: Genetic testing in the 21st century.

At some point, specialized tests may be ordered to evaluate the function of muscles and nerves.Electromyography (EMG) is done by inserting a needlelike electrode into a muscle and recording the electrical signals it generates during contraction.

A nerve conduction velocity test (NCV) is done by placing surface electrodes on the skin at various points over a nerve. One electrode delivers small shocks to the nerve and the others record the nerve’s responses. Those responses are typically smaller than normal in people with FA, because FA damages the nerves.

Computerized tomography (CT scan) or magnetic resonance imaging (MRI) might be performed to look for extensive changes in the cerebellum, which are more common in spinocerebellar ataxias than in FA.

Samples of blood and urine are checked for chemical imbalances that occur in diseases other than FA.