Voice Banking Offers the Promise of a Natural Voice 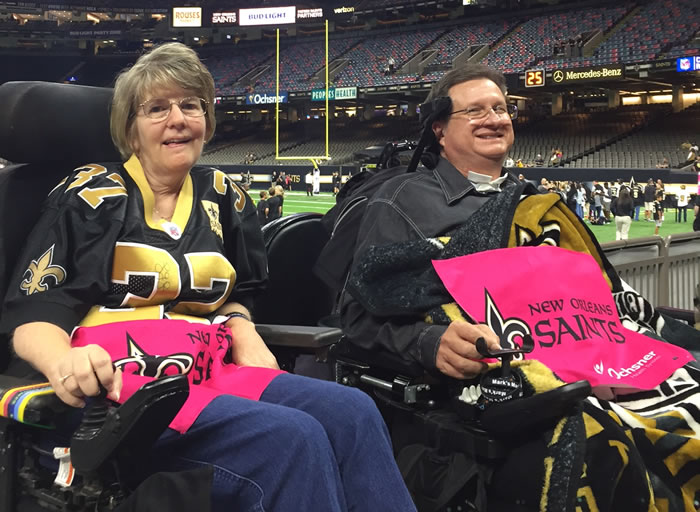 A strong voice was the foundation of Penny Abreo’s job as a first-grade reading teacher in Houma, La. But when she heard her words slurring and experienced unexplained fatigue and hand cramps, she and her husband, Aaron, sought medical advice.

At 41, Penny learned she had ALS. Also known as Lou Gehrig’s disease or motor neuron disease, ALS affects nerve cells in the brain and spinal cord that control voluntary muscle movement such as speaking, walking and other life functions. As the cells stop working, so do the muscles used to do such activities.

Voice banking — recording one’s voice while it is still functional — allows people with ALS and other conditions that affect the ability to speak to transform those recordings into personal synthesized voices that sound like themselves. That voice can be used in speech-generating devices without relying on stock computerized voices. 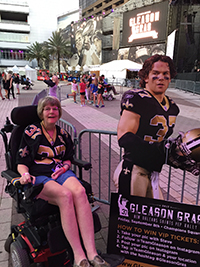 After living with ALS for five years and hearing her voice become increasingly distorted, Penny began using a Dynovox speech-generating device with a computerized voice.

“I get 50–60 percent of what she says now,” Aaron says of Penny’s natural voice. “It’s getting more frustrating for her now, because everything else is more difficult.” While the synthesized Dynovox voice is easier to understand, it can be hard to hear in a crowded space with other people talking.

Voice banking offers Penny and Aaron a unique solution. One year ago, Penny asked her older sister, Nancy, if she would record her voice, which is similar to Penny’s. “I thought it would be nice to hear her own voice,” Aaron says.

Nancy is currently finishing the recordings, and they expect to have the audio files linked to Penny’s device soon. With the personalized voice provided by Nancy, they can also upgrade Penny’s device to make amplification easier.

There are two terms sometimes used interchangeably that describe different processes, according to Amy Wright, speech and language coordinator at the MDA Care Center at Carolinas Medical Center in Charlotte, N.C. Voice banking is when a person records “a large inventory of phrases, using specific software that converts those samples into a synthesized voice that sounds similar to you,” Wright says. The results can range from sounding “very much” like the person’s original voice to “a little flat, but still pretty good,” she says.

Another option is message banking, where a person records certain phrases that can be saved as sound files to be used in a communication device later.

“We encourage people to do both,” Wright says. “Sometimes message banking is a bit less daunting, but can be more meaningful because you can capture inflection and intonation — things like ‘I love you’ with more in the voice, using nicknames or terms of endearment.”

Speaking to pets poses a particular challenge for those using computer-generated voices on communication devices, she notes. “Animals do not respond well to synthesized voices; ‘Boo Boo, do you want a cookie?’ works better in your own voice,” she says.

Another reason to consider voice or message banking is for the benefit of relatives and friends. “While I may not have a particular attachment to the sound of my voice, my family members do,” Wright says. “I’ve seen people tear up when we import phrases and they hear their loved ones speak to them with their own voice instead of a computerized one.” 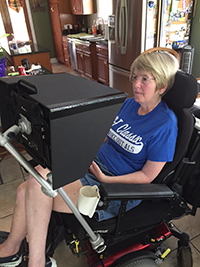 As soon as she meets a client diagnosed with ALS who is speaking intelligibly, Elizabeth M. Ehrensing, MCD, CCC-SLP, a speech-language pathologist in New Orleans, says she discusses voice banking with them. She works with the MDA Care Center at Louisiana State University Health Sciences Center.

“The majority of our patients with ALS eventually lose the ability to speak, and we ask them if they’d like to voice bank,” she says. “For some, it’s a way to be proactive. Some take us up on it, and some don’t.” Those who don’t often cite the time required for voice banking, saying they’d prefer to spend their time traveling with family, for example.

It can take several hours over several days or weeks to record the approximately 1,600 sentences used to produce an individualized synthesized voice. Wright is forthright about the benefits and limitations of voice banking and provides families with a brochure that asserts “a personalized, synthesized voice may take a lot of effort to create, may not work with all communication software or platforms, may be less understandable than a high quality commercially available synthesized voice, and will not sound exactly like the individual, but will sound similar.”

Still, Wright sees value in voice banking beyond the ability to communicate, and she wants to make sure individuals with ALS know their options. Those whose voices have deteriorated may have a relative, like a sibling or an adult child, record on their behalf, as Penny’s older sister is doing. There are also companies that work with donated voices from volunteers that can be used if a person wants a natural voice but doesn’t have the ability to self-record.

The key to success

“Complete the banking process as early as possible, if it is something you are interested in doing,” says Sarah A. F. Reising, MS, CCC-SLP, a speech-language pathologist at the MDA Care Center at the Mayo Clinic in Jacksonville, Fla. “The more intelligible and clear your speech is at the time of banking, the clearer and more natural the banked voice will be. It can also be less fatiguing if completed earlier rather than later.”

Even if you aren’t sure you want to commit the time to voice banking, Reising encourages individuals to do at least some message banking, “especially those phrases that are emotionally connected to them, such as telling their family they love them or are proud of them. Also, any catchphrases the person says, their laugh or phrases they want to hear inflected in their own voice. Recording these types of messages make using a device for communication more personal,” she says.

If you or a loved one is diagnosed with ALS or another neuromuscular disease that impacts speech, talk with your MDA Care Center multidisciplinary care team, which includes therapists who can help you learn about your options and get started with voice banking.

Motivated individuals can do message banking recordings on their own time at home, using a computer with a microphone and sound recording program, such as Windows Sound Recorder or QuickTime Player for Mac OSX. There are also voice memo and recording apps for tablets and smartphones. For the best results, follow these tips:

Once the words and phrases are recorded, they need to be stored as audio files. Consider one of these free message banking tools:

To complete the voice banking process, you’ll need to use a service that takes the audio files of a recorded voice and synthesizes them into a voice that resembles the human voice. This service is not covered by health insurance plans. Voice banking service options include:

Cheryl Alkon is a freelance writer based in Massachusetts.