Surviving and Thriving in College 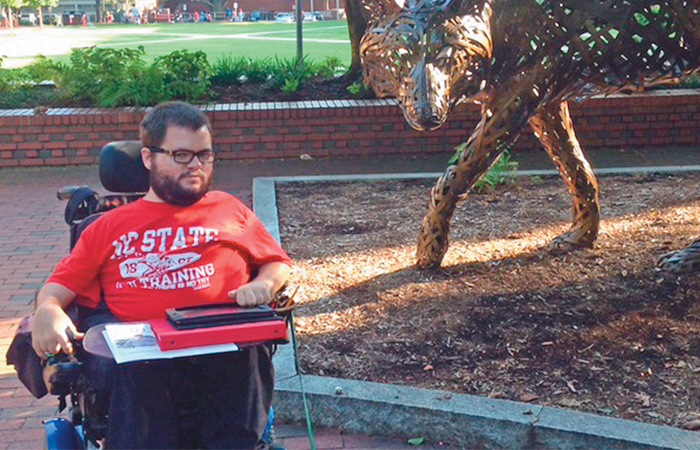 College is a blast, but it can come with a pile of challenges the size of a mountain. Just look at the hundreds of articles there are advising students on how to conquer stress, manage time and deal with that one professor who may as well have been stripped from an ‘80s movie. College can be the best — and the most draining — time in a person’s life.

If college is difficult for able-bodied students, imagine the challenges it presents to someone like me, who has spinal muscular atrophy (SMA). If you think trying to balance 15 credit hours of classes with a job at Starbucks is hard, try crossing campus in a power wheelchair during the winter while your driving hand is frozen.

I’m not going to lie: Surviving college was no easy feat. But despite the obstacles I faced, my four-and-a-half years at North Carolina State University were some of the best years of my life. The advice and tips I got helped me, so, in case it’s helpful for those who are skeptical about college due to their own disability, here is how I survived college with SMA.

1. My first stop was the Disability Services Office. Since high school, I knew that I wanted to go to NC State. Once I was accepted, my mom and I visited the Disability Services Office, and thank God we did. They directed me to Vocational Rehabilitation (VR), a state-supported division of services that assists individuals with disabilities who are pursuing meaningful careers. VR ended up covering my tuition.

The Disability Services Office also helped me with academic accommodations, like note-takers in my classes. Growing up, I always had an adult aid with me at school, but these were students who were paid to sit in on my classes to take notes and record lectures. They were all very easy to work with, and it was a tremendous help to have accommodations in the classroom.

2. I got involved with groups on campus. I lived at home throughout college, but that didn’t stop me from being active in student organizations. I wasn’t interested in Greek life, so I joined the student newspaper, the Technician, and a campus ministry called Intervarsity Christian Fellowship.

The newspaper is where I had my first published work and where I received my first paychecks (even though the amount on those paychecks was laughable). Eventually, I became the co-features editor and ran the section with my friend Taylor.

I have a long list of great memories with my friends from the Technician and Intervarsity: late-night meals at Cook Out and Wendy’s, midnight premieres of Marvel movies, getting free passes at the local bowling alley when the elevator broke, going to a Halloween party that got shut down by the cops for a capacity fire hazard, and my 21st birthday party at my friend Sam’s house. I had fun.

But being involved had other benefits. I made lifelong friends who understood my physical limitations and were willing to help when I needed it. For example, through the state’s Independent Living Rehabilitation Program, I was able to hire two friends to drive me to classes and activities. This provided a break for my parents and more independence for me.

3. I built relationships with my professors. Nine out of 10 times, professors are cool people who want you to succeed. I only ever had two who could outdo the principal from “Ferris Bueller’s Day Off” in terms of their utter lack of personality.

Communicating with my professors on a regular basis helped them better understand my needs. Anytime I asked for extended time on a test or an alternative assignment, my professors were perfectly willing to make those accommodations.

4. I planned each day as much as I could. I’ll be the first to tell you that I’m not the most organized person. I hate entering stuff in my calendar, my inbox tends to overflow with junk mail and unread messages, and I procrastinate regularly. Yet, I found it was vital to plan each day as best as I could.

Like many individuals with SMA, my upper-body strength has deteriorated as I’ve gotten older. When doing homework between classes, I’d have to make sure my hand stayed close enough to the joystick on my chair so I didn’t get stuck in the hallway. Eventually, I couldn’t eat, drink or work without assistance.

In 2015, I began using a JACO robotic arm, but before that, I was entirely dependent on other people. As such, if I knew I’d be on campus for lunch or dinner, I made sure to plan in advance to eat with someone. Eventually, it kind of turned into a weekly schedule: dinner in the school newspaper office on Mondays, lunch with Jed on Tuesdays, eat at home on Wednesdays, lunch with Lucas on Thursdays, hang out with a friend on Fridays.

Planning my day didn’t just help with eating. I made sure that I could get where I needed to be and get there on time. It required some additional effort to plan each day out carefully, but it’s better than getting stuck in the hallway.

5. I asked strangers for help. At least 99.9 percent of the time, I found people were more than willing to help if I just articulated what I needed. At a large university where I constantly needed help with things like opening doors and picking up stuff, this skill became an essential part of my survival. Particularly in situations where a friend had to cancel at the last minute for lunch, I had no choice but to ask someone I didn’t know for help. Is it easy admitting to the guy behind the counter at Jimmy John’s that you need help lifting your arms to eat? It’s difficult and pretty embarrassing at first, but I’ll take it over starving.

Heck, it even allowed me to flirt with girls: “Hey, I know you were planning on going home, but I kinda need help with my lunch. Wanna go to Bruegger’s Bagels?” I also have a service dog, which is code for chick magnet. In my experience, no girl will ever say no to helping you feed your dog.

Having SMA or another physical disability while trying to pursue a degree can seem impossible at times. The truth is, it’s hard, but it’s certainly possible. And I’m not even one of those straight-A students who goes on to get a Ph.D. that you see at SMA conferences. I graduated with a decent GPA, but I spent a lot of time goofing off and playing on my iPad. I’m just a dude, and this is how I made it through college.

Kevin Schaefer, 23, graduated from NC State in 2016 and is now a columnist for SMA News Today. He lives with his parents in North Carolina.

MDA’s Young Adults Program is dedicated to supporting individuals with neuromuscular diseases as they pursue education, employment and independent living. Go to the Young Adults website to find resources and community and much more.