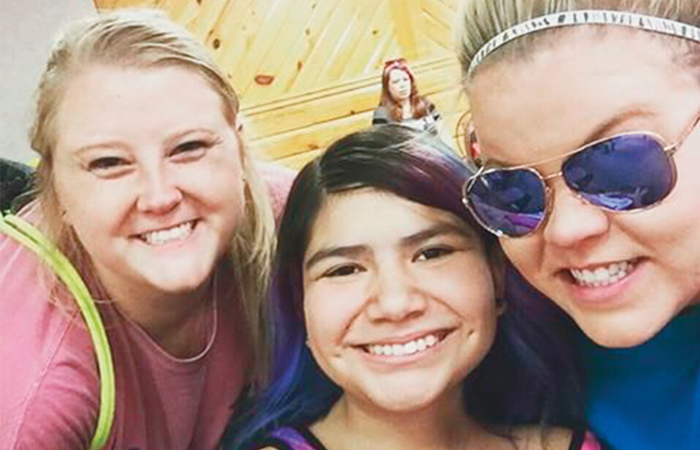 Elvira, a 16-year-old with spinal muscular atrophy (SMA), has been attending MDA Summer Camp near her hometown of Amarillo, Texas, since she was 7. Between campers, counselors and other volunteers, she has made a lot of friends and memories over the years, which is her favorite thing about attending camp.

“[The people I’ve met] have helped me so much and impacted my life,” she says. “I remember the first year I went, I was really shy, and they helped me realize how fun camp was and that it was worth it.”

Elvira, like many campers, has formed strong relationships with her counselors and fellow campers. Shelby Bryant and Hanna Garcia, two of Elvira’s longtime counselors, have known her for years, but it didn’t take long for them to develop a bond.

“You all get really close at camp, even though you’re only there for a short amount of time,” Elvira says. “It’s because we don’t care how we act in front of each other, and we’re all outgoing with each other.”

Garcia explains that the strong bonds she has formed with Elvira and other campers keep her coming back year after year.

“We are a pretty small Summer Camp, so it’s like a family,” Garcia says. “We’re all so close, and seeing them have the chance to go to camp and experience everything, and seeing the smiles on their faces, it’s so much fun.”

While Elvira has two more years of attending MDA Summer Camp, she knows that Bryant, Garcia and the rest of her camp family aren’t going anywhere. They’re always there to provide support and encouragement.

“I really feel that no matter how many years it’s been, we’ll always be lifelong friends,” Elvira says.

MDA Summer Camp is considered “the best week of the year” by campers and counselors, alike. Kids have the freedom to be kids in a place where anything is possible. Learn more about becoming a camper or volunteer at mda.org/summer-camp.