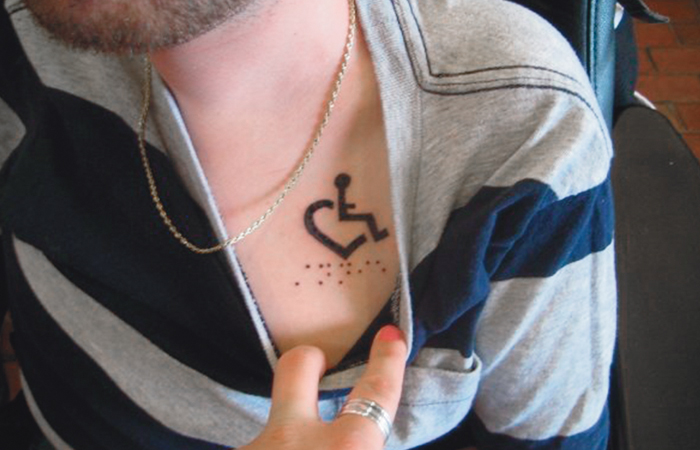 In 2004, when Stevie Hopkins, a 33-year-old entrepreneur who has spinal muscular atrophy (SMA) and his sister, Annie, who also had SMA, put a wheelchair heart design on a pub crawl T-shirt, he never imagined it would eventually turn into a business that employs himself and more than 20 other employees, including a half-dozen employees with disabilities. 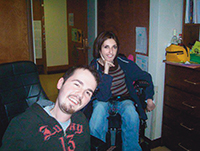 After the pub crawl, Annie, who had created the design, got the symbol tattooed on her shoulder, and when people saw it, they always wanted to know more about it.

“She showed the tattoo to people during one of her final years of MDA Summer Camp,” Stevie says, “and people were just flipping out. At the end of the camp week, I think more than 20 people went in three vehicles to a tattoo parlor to all get the same tattoo together.”

From there, Stevie and Annie copyrighted and trademarked the logo and started a company called 3E Love, which stands for embrace, educate and empower. They incorporated in 2007 and began selling T-shirts with the logo.

While that was happening, Stevie worked as a financial planner, owned a small record label and managed bands in his free time.

“My friend and I promoted concerts, probably 100 a year, and we were doing really well,” he says. “We were having the time of our lives.”

However, in 2009, a combination of events led Stevie to take some time away from the music business and financial planning and focus on 3E Love full time. In January of that year, Annie passed away, devastating Stevie and his family. The economic downturn also hurt his financial planning and music promotion businesses.

“I was burned out, so I jumped in full speed with 3E Love for the next two or three years,” he says.

In those years, Stevie grew 3E Love from a niche T-shirt business to a company that not only designs shirts and licenses out the wheelchair heart logo to other companies, but also does all of its own T-shirt printing. The fact that they design, print and merchandise in-house caught the attention of local bands and businesses, and now a significant portion of 3E Love’s income comes from sales not related to the wheelchair heart logo.

In a funny way, Stevie’s exit from the music business has come full circle, as now he is back working with local bands that he was promoting years ago.

“A local band needed shirts and they liked that I spoke their lingo, so they kept printing with us, and they referred me to a bigger band, and now I’d say 80 percent of our revenue comes from the music business,” he says.

But just because 3E Love is expanding beyond the wheelchair heart logo doesn’t mean Stevie has forgotten the company’s roots. He has launched multiple advocacy campaigns for people with disabilities, and he plans to continue to do more as his business grows.

“This year, I launched Vote With Heart, which is a lobbyist group for people with disabilities,” he says. “3E Love funds all of it. I’ve invested a lot in it, and I’m just doing what I feel is right now.”

Ultimately, Stevie would like 3E Love to have regional representatives who will go to events, speak, advocate for local policymaking and sell 3E Love merchandise. His goal is to have at least 50 percent of the 3E Love team made up of individuals with disabilities.