Diagnosis of neuromuscular disease hinges on a doctor's ability to identify a specific defect of neuromuscular function. Sometimes, a doctor can infer this functional defect — and the disease associated with it — by giving a physical exam, doing a blood test or looking at the anatomy of nerves and muscles.

But other times, the doctor may have to directly evaluate the functions of nerves and muscles and the connections between them by using two complementary techniques — nerve conduction velocity testing (NCVs) and electromyography (EMGs). 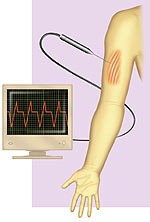 Both NCV and EMG rely on the fact that the activity of nerves and muscles produces electrical signals called action potentials. A nerve is actually a bundle of axons, cables that conduct action potentials from one end of a nerve cell (or neuron) to the other.

In NCV and EMG, these tiny electrical events are amplified electronically, then visualized on a TV-like monitor called an oscilloscope and even heard using audio equipment.

NCV measures action potentials conducted by axons, so doctors use it for diagnosing diseases that primarily affect nerve function, such as different forms of Charcot-Marie-Tooth disease (CMT).

It's done by placing surface electrodes (similar to those used for electrocardiograms) on the skin at various points over a nerve. One electrode delivers a mild electrical shock to the nerve, stimulating it to generate an action potential. The other electrodes record the action potential as it's conducted through the nerve.

Doctors often use NCV to determine the speed of nerve conduction (hence, its name). Conduction speed is influenced by a coating around axons, called myelin. Myelin insulates each axon and normally forces action potentials to "jump" quickly from one end of the axon to the other. If the myelin breaks down (as in CMT1), the action potential travels more slowly.

NCV also can measure the strength of the action potential in the nerve, which is proportional to the number of axons that contribute to it. If axons degenerate (as in amyotrophic lateral sclerosis) or become clogged with debris (as in CMT2), the action potential becomes smaller.

An electromyogram measures the action potentials produced by muscles, and is therefore useful for diagnosing diseases that primarily affect muscle function, including the muscular dystrophies. Also, some EMG data can reveal defects in nerve function.

In EMG, the doctor inserts a needlelike electrode into a muscle. The electrode records action potentials that occur when the muscle is at rest and during voluntary contractions directed by the doctor.

Though NCVs and EMGs are valuable tools for doctors, they can be distressing for patients. Some people find the electric shocks of the NCV or the needle penetration of the EMG uncomfortable or even painful. Young children might struggle during the tests, making it difficult for doctors to carefully monitor nerve and muscle activity. To ease discomfort, topical anesthetic can be applied to the skin — but it won't prevent muscle pain during the EMG. Sometimes sedating medications are needed to keep a child calm.

Partly because of these factors, NCVs and EMGs are generally used when it's not possible to gather the right information from other diagnostic tests. A muscle biopsy (excising and examining muscle tissue) can reveal hallmark anatomical features of some neuromuscular diseases, making EMG and NCV unnecessary. Genetic tests are now available for diagnosing some diseases, and in those cases, EMG and NCV usually can be bypassed.

Nonetheless, NCV and EMG remain the gold standards for evaluating the function of nerve and muscle. So, when a doctor suspects that a patient has a neuromuscular disease that isn't clearly associated with anatomical or genetic defects (like some types of CMT, or myasthenia gravis), NCV and EMG are among the most valuable diagnostic tools.

"Simply Stated" is a Quest column designed to explain some terms and basic facts about neuromuscular disease.