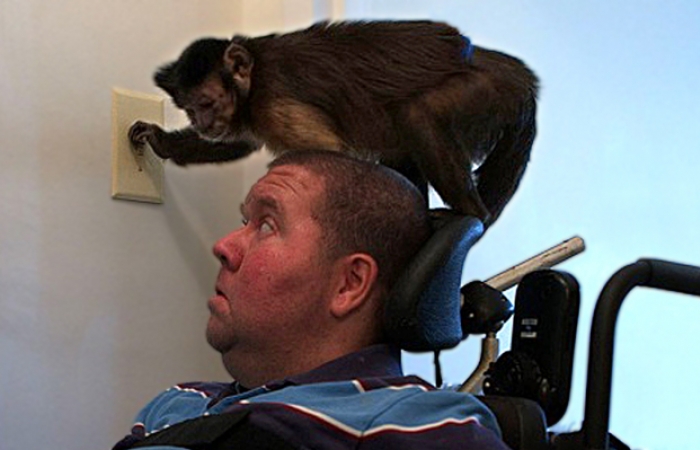 A guy rolls into his kitchen with a monkey on his shoulder … No, it's not the beginning of a really bad joke but an everyday occurrence for Michael Townsend of Baltimore, who received his monkey helper, Kathy, in 2007 from Helping Hands: Monkey Helpers for the Disabled. 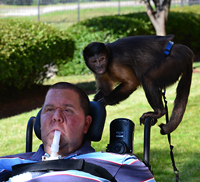 Townsend, 45, who has Duchenne muscular dystrophy and uses a power wheelchair, is one of more than 160 people across the country who has received a monkey helper free of charge from Helping Hands.

Since 1979, Helping Hands has been training and placing capuchin monkeys with people who have physical disabilities that limit their ability to function within their homes.

These 5- to 8-pound primates are bred at the center and grow up with foster families in socialization homes, where they learn to live in a home environment with people, pets and everyday distractions such as ringing phones.

When the monkeys are 10 to 12 years old, they leave their socialization homes to begin training at Helping Hands Monkey College in Boston, where they spend three to five years learning to perform daily tasks that allow people with disabilities to maintain their independence.

What’s so great about a monkey?

All service animals are worth more than their weight in gold, but for some people with disabilities, monkey helpers have advantages over service dogs. For others, traditional service dogs are still the way to go.

Some people are allergic to dogs and can't have service dogs, but they don’t have to miss out on the assistance and companionship offered by service animals. Monkey helpers have hair, not fur, so allergies aren't a problem.

Monkey helpers can do more. They can climb up on a bookshelf and retrieve the book on which a laser pointer is shined. Their opposable thumbs give monkeys the manual dexterity to scratch itches, adjust eyeglasses, turn magazine pages, open water bottles, turn televisions and computers on and off, and load CDs and DVDs into their players.

Monkeys live longer than dogs. They live 30 to 40 years in captivity, and Helping Hands rarely removes its monkeys from their working homes (see Monkey Retirement).

People who need or want to take their service animals everywhere with them should stick with service dogs. Helping Hands doesn't permit its monkeys to be taken out into public. The organization wants its monkeys to feel safe and comfortable, and public outings are stressful for them.

Monkey helpers also aren’t recommended for people who work full time or live more active lifestyles because they shouldn't be left in their cages for more than a few hours.

Townsend says that Kathy has made his life a little less difficult and a lot more fun. Since he has extreme weakness in his arms, Kathy helps him by fetching items, flipping light switches, and turning the computer and printer on and off.

The 22-year-old monkey loves to operate the TV and even has her favorite shows.

"Unfortunately, if I want to watch a particular show on TV and Kathy wants to watch something else, she typically wins," he says.

Townsend, who lives in an apartment with his partner and has professional nursing care and personal care aides, considers the tasks Kathy performs to be minor compared to the companionship she offers.

"I value our relationship and also care for her and enhance her life," he says. "We are a real team!"

Kathy keeps Townsend in the moment and gives him a positive focus, because “who can possibly be sad or worried with a monkey sitting on his shoulder?”

Monkey recipients must have patience and a sense of humor. These service animals aren't immune to "monkeying around" and can be a wonderful source of amusement.

When Townsend first started daytime ventilation, Kathy, who was 17 at the time, paid close attention to how the ventilator worked. She learned from watching that by wiggling his vent tubing she could make the alarm sound and someone would show up to check the ventilator.

“Presto — Kathy had her own call bell,” he says. "Anytime she wanted a snack, or bath or attention, she would use my vent alarm to call for service."

Townsend says it took some work to reduce that behavior.

Taking care of a monkey helper is comparable to caring for a small child.

Kathy has diabetes and needs special care such as a healthy diet, insulin injections, special medication and blood sugar monitoring.

With assistance, Townsend feeds her every two hours and is glad that he can provide the special care that Kathy needs.

These monkeys need a bath at least once a week. Kathy loves the warm water, so Townsend tries to bathe her often.

“She gets excited anytime she hears the water running and thinks that it might be for her," he says. "Sometimes it’s tough to tell her that bath time is over."

Helping Hands’ monkeys are trained to relieve themselves in their cages and only wear diapers when the cages aren't available.

Because they have been raised in  loving socialization homes, Helping Hands’ monkey helpers are accustomed to living with humans in a home environment. Their cages, in addition to being potty areas, serve as safe havens where they feel safe and comfortable if something unexpected happens.

If possible, recipients purchase their own food and supplies such as diapers, but Helping Hands will subsidize this cost if needed. Helping Hands also covers the cost of veterinary care for as long as recipients have their monkey helpers.

It costs $40,000 to train, place and support each monkey helper. Helping Hands is a nonprofit organization that receives donations from foundations, corporations and individual donors.

Since they’re always considered a part of the Helping Hands program, monkey helpers always have a place to go if they’re no longer able to stay in a recipient’s home. Sometimes they’re placed in special care homes if they need medical attention, or retirement homes if they're removed from their working homes and are too old to be placed in someone else's home (late 20s or early 30s).

A perfect example is Chanda King and Chi-Chi of San Angelo, Texas. Introduced in the 2006 Quest article What Would Rover Say?, King, who has spinal muscular atrophy and uses a power wheelchair, received her monkey helper, Chi-Chi, in December 2003 and developed an instant friendship.

But after only three-and-a-half years of working together, Chi-Chi had to be returned to Helping Hands when King became severely ill with advanced flulike symptoms, coming close to death on several occasions. (She was later diagnosed with the bacterial infection Clostridium difficile.)

During that time, King arranged for Chi-Chi to be returned to Helping Hands because she feared her beloved monkey helper wouldn't get enough attention and that, if she died, Chi-Chi would be left alone all day, as her husband Marell was working and in school at the time.

Chi-Chi, who was 30 at the time, went to live with a couple who volunteered to take care of her and now she's enjoying retired life.

It was an extremely difficult decision, says King, but adds, “I’m comfortable with the fact that Helping Hands has her in the right hands.”

Individuals interested in getting a monkey helper should visit Helping Hands’ website, and read the eligibility requirements (see I Want a Monkey). The seven-step application process usually takes between three and six months to complete.

The first step is to fill out an inquiry form. If the inquiry is approved, applicants will receive a detailed application inquiring about their injury or disease, range of motion and home environment. Helping Hands also needs to know the type of help applicants need in order to match them with appropriate monkeys at the Monkey College.

Applicants also need to send in references from non-family members and medical professionals, as well as videos and floor plans of their homes. The next step is to schedule interviews via telephone and Skype (online video chat), and a home visit so that Helping Hands can get to know the applicant on an individual basis.

After the application process, some people must wait for their monkeys to finish training at Monkey College in order to take them home.

When the monkey is ready, the trainer will make another home visit, this time bringing the recipient’s monkey helper. Helping Hands is unique in that it doesn't require recipients to visit the center to receive their monkeys.

The human-monkey partnership means the world to Townsend and other recipients.

"She’s like a member of the family and, in turn, we comprise her ‘troop,’" he says.

For a glimpse into the lives of Michael Townsend and his helper monkey, Kathy, visit the Helping Hands website, and view its March 2013 Monkeys in a Minute episode.

I Want a Monkey

Helping Hands is very selective about its monkey placement. Applicants are required to: