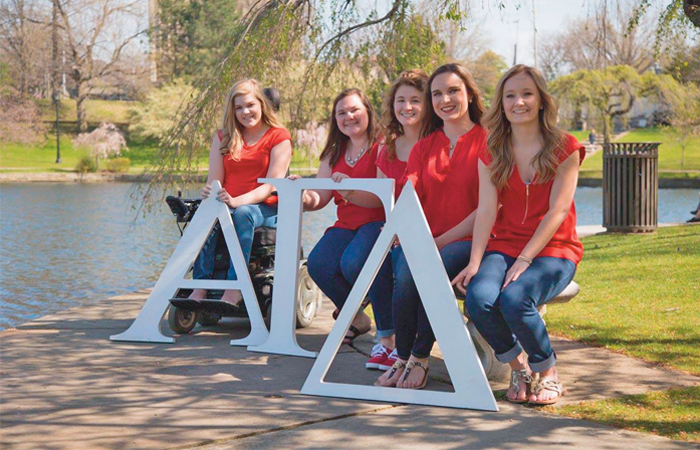 Between working as a resident assistant, being the philanthropy coordinator for her sorority Alpha Gamma Delta, acting as the 2016 Greek Sing Director, planning a study abroad trip to Australia and volunteering for other organizations, it’s hard to believe that Sarah Bellish, a sophomore at Baldwin Wallace University (BWU) who has spinal muscular atrophy (SMA), still has the time to advocate for improved accessibility on her college campus.

“It’s been a battle,” Bellish says, “but after I came back after the summer, it was amazing to see all of the changes they can make.”

She first noticed the major accessibility issues during freshman welcome week, when she tried to attend a school-sponsored block party with some of her classmates and found that almost all the activities weren’t accessible to individuals in wheelchairs.

“All they had on the grounds that was accessible was a photo booth,” she says. “All my friends wanted to play the games, so I said ‘Yeah, go ahead,’ and I just went to my room and started bawling.”

She was so upset by the situation that she considered transferring schools, but talking with her mom helped her calm down. Bellish’s mom suggested joining a sorority, and Bellish found one that was a good fit for her. Sorority membership also provided a stronger support system.

“My sorority sisters give me a lot of support,” she says. “They wrote letters to the school, went to meetings with me and things like that. Disability services mostly focus on academic accommodations, which is great, but that’s not necessarily everything that I need.”

For example, when Bellish initially joined Alpha Gamma Delta, most of the floors and the chapter rooms were not accessible. Her sisters and the sorority’s headquarters helped Bellish push for more accessibility, and now the sorority has moved to a first-level building.

“We also changed the way we do recruitment, because I couldn’t attend half of the events,” Bellish says. “All of that is accessible now, too.”

Beyond her sorority house, Bellish has spoken with the university president and other campus leaders to address accessibility issues on campus. For example, Bellish says she got stuck in a lift in BWU’s student union dozens of times throughout her freshman year. This year, the university installed a new lift, including a climate-controlled space where students can wait for it.

While it’s clear Bellish is making BWU a more accessible place for herself and other students with disabilities, it’s far from her only activity at the university. Beyond her studies in business administration, Bellish loves singing and hopes to sing professionally in the future. She even recorded a song in Nashville — as part of a Make-A-Wish trip — about her experience at MDA Summer Camp. The song, called “Let Me Go Back,” reflects on her 11 years at summer camp and all the great memories she made during that time.

“I think MDA Summer Camp has been the most helpful thing for me with forming my thoughts about accessibility and everything,” she says. “It makes you realize you’re not just fighting for yourself, you’re fighting for all your friends. We have that week of the year to recognize that there are all these other people who feel the same things and go through the same things, and forming relationships with them has been the most helpful thing ever.”

One particular memory that stands out for Bellish is when she performed “Let Me Go Back” for her fellow campers.

“Performing at camp has been my favorite time singing or performing in my life because I’m singing about the people I care about and the things that matter to them,” she says.

For more information about MDA Summer Camp, visit mda.org/services/mda-summer-camp. Listen to Sarah Bellish’s song “Let Me Go Back” at bit.ly/2cpwJvU.