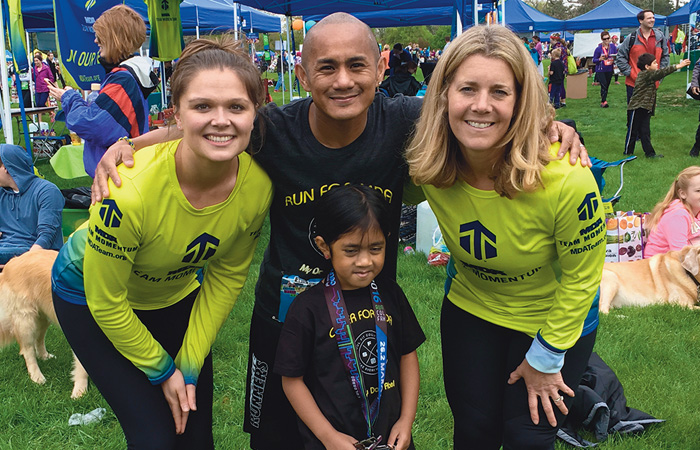 Abel Alejandrino goes above and beyond for his daughter, Ava

By the end of this summer, Abel Alejandrino had already run two marathons and an ultramarathon in support of MDA. He had covered more than 100 miles — and he was just getting started. Alejandrino intends to run at least two more marathons this year as part of MDA Team Momentum, including the Bank of America Chicago Marathon in October and the Dallas Marathon in December. 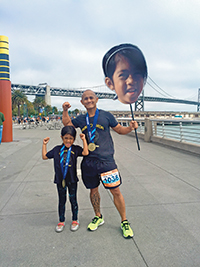 Why does he run? Alejandrino’s 7-year-old daughter, Ava, has nemaline myopathy, a neuromuscular disorder that causes weakness and poor muscle tone (hypotonia) in the face, neck and upper limbs, and often affects the respiratory muscles (those that control breathing).

“I only really started running in 2012, and I’ve always been active, but nothing like this,” Alejandrino, a program specialist for San Francisco County, says.

While he says doing so much running has been physically challenging, that hasn’t affected his resolve.

“A lot of people think I’m doing all the work,” he says, “but this is what people like Ava who have muscular dystrophy are doing every day.”

When Ava was first diagnosed with nemaline myopathy in late 2013, it came as a surprise to Alejandrino and his wife, Cynthia. They weren’t sure how their friends and family would deal with the news, so some found out about Ava’s diagnosis for the first time through Alejandrino’s MDA Team Momentum fundraising campaign. He says the response has been great, and he’s seen many people reach out to provide support, including his fellow MDA Team Momentum runners.

“The first Team Momentum event I did was out of state,” says Alejandrino. “I arrived and I was actually wearing the MDA Team Momentum shirt they sent me. As soon as [the other Team Momentum participants] saw me, they brought me into their group and it was so welcoming and such a rewarding experience, not only for me, but for my daughter as well. It was like we knew everyone already.”

After Alejandrino finishes his whirlwind year of running marathons, he plans to share his passion with Ava at the 2017 Kids Marathon Mile at Legoland in January 2017.

“She’s preparing,” he says. “We have to strategize, because even though Legoland is only a mile, it’s like a marathon for her. We’re going to hold a track session and bring the community in and get people involved. She’s happy and excited about it.”

Join Abel and hundreds like him, and cross the most meaningful finish line of your life. Upcoming events include races in Dallas and Miami. Learn how you can get involved with MDA Team Momentum at mdateam.org.