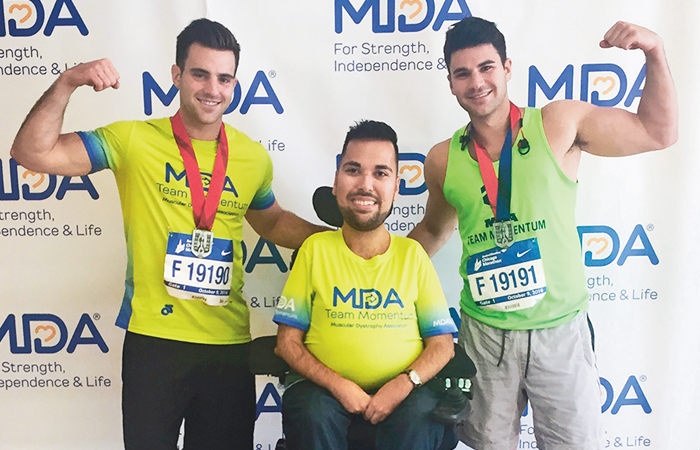 When Bryant Donnowitz first got involved with MDA, he didn’t have a direct connection to neuromuscular diseases. He was interested in helping MDA’s cause, but he didn’t know where to start, so he contacted his friend, April Tunnicliff, who is now MDA Team Momentum’s senior national endurance manager. 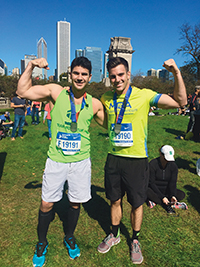 “I reached out to April, and she told me about MDA and Team Momentum. She was very encouraging, so I got involved, and I’ve been doing it for four years now,” says Bryant, who serves as a member of the Team Momentum Volunteer Committee for the Chicago market.

“It all started with [Bryant] running it,” says Jake. “Every year after he finished, he said the exact same thing: ‘I’m done.’ But he just kept coming back, so I had this question in my mind: ‘Why does he keep coming back?’”

After seeing Bryant cross the finish line in 2015 and embrace the MDA Team Momentum group cheering him on, Jake started to get it. And when he crossed the finish line himself in October, he completely understood.

“Seeing the kids at the end of the race, that’s really what brings you back,” Bryant explains, “because they’re so happy to see that you’re helping the cause move forward in a positive direction. That’s the main thing, but also every year family members, friends and co-workers start reaching out about the marathon, and so it helps bring more people into the organization. I feel like we’re kind of the glue to bring people together.”

This year, Bryant and Jake were joined by two of Bryant’s friends, and they raised more than $5,000 for MDA. While the brothers weren’t ready to commit to another marathon, it seems likely this won’t be their last race for MDA.

“The only way I would run a 5K or another marathon or half marathon is if it is for MDA,” says Jake. “I can’t see myself going through that pain for another reason.”

Join MDA Team Momentum to cross the most meaningful finish line of your life. Upcoming events include the Chicago Spring Half Marathon & 10K (May 21), Colfax Marathon in Denver (May 21), Boston’s Run to Remember (May 28) and Rock ‘n’ Roll San Diego (June 4).