A Room of His Own 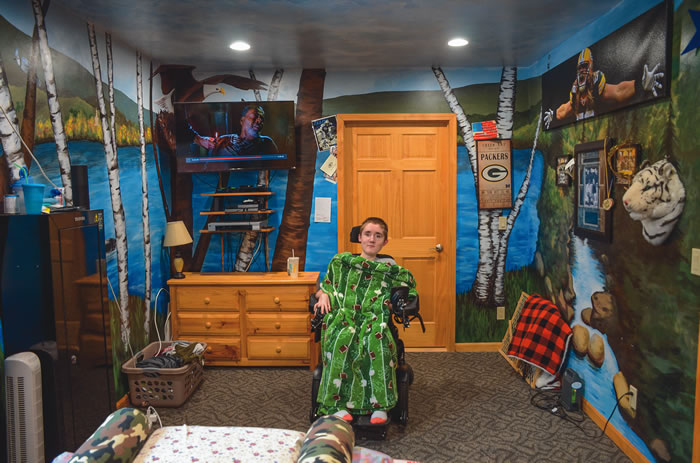 A high school graduate with DMD gets the voice-activated room of his dreams.

When Robbie Ivey, a 19-year-old soon-to-be college student from Iron River, Mich., and his mother, Carrie, first met Bill and Deb Weis, they had an idea but they didn’t know how to make it happen. They explained to the couple that they were looking for a way for Robbie to live more independently with Duchenne muscular dystrophy (DMD) by operating powered objects in his room, like the lights, TV and bed.

“We asked if they knew anyone who had that capability,” Carrie says. “Bill called us a couple days later and asked if we wanted to meet and if we could bring Robbie’s bed remote. I found out he worked for Microsoft for 15 years.”

Bill had recently retired from a 40-year career in the computer industry, and as a longtime MDA supporter, he was the perfect person to take on this project. After visiting with Robbie and getting an idea of his needs, Bill created a voice-activation system for Robbie’s room in less than two weeks. He customized consumer devices such as Amazon Echo, Google Home, Google Chromecast and others to make it work. The setup allows Robbie to use his voice to operate his TV and apps like Netflix, change the position of his bed, control a fan, turn his lights on and off, and even make phone calls.

“It helps me to not be so needy with things around here,” Robbie says. “I can basically stay up as late as I want, and it allows me to do things at my pace. And it allows my mom to take a break, too, and not be in here every five minutes helping me with stuff.”

The technology came at a perfect time for Robbie, as he is preparing to start college at Oakland University in Auburn Hills, Mich. In the fall, Bill will go with Robbie’s family to re-create the voice-activation system in his dorm room. As a passionate Green Bay Packers fan, Robbie intends to study business and sports management with a goal of one day being the general manager of the Packers.

While Robbie has a lot on his plate these days, he still takes time to attend MDA events. Last year, he worked with Bill and Deb to bring the first Toast to Life Upper Michigan MDA Gala to life. From being a former MDA Ambassador for Upper Michigan and Northeastern Wisconsin to attending Muscle Walks to making lifelong friends at MDA Summer Camp, Robbie and his family have seen the positive effect MDA has, even beyond introducing him to Bill and giving him a more independent lifestyle.