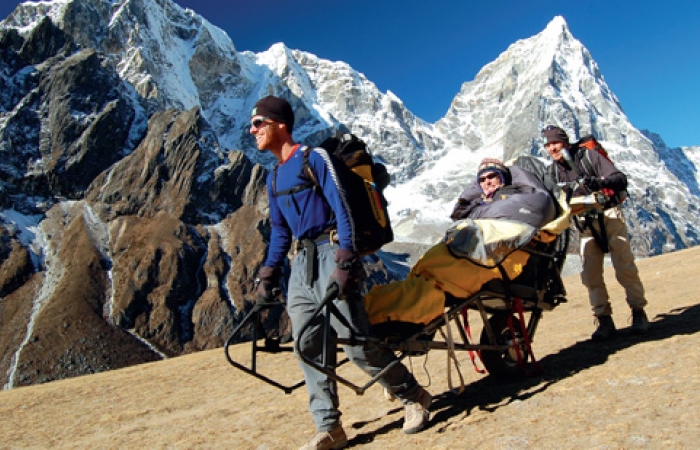 Full-time wheelchair users with a hankering to enjoy the great rugged outdoors may find that their standard chairs can’t always take them where they want to go. That’s where these specially designed conveyances can step up to the job.

Even extreme locations like the climbers’ camp at the base of Mt. Everest have been reached and conquered by severely disabled people riding in these unusual-looking contraptions, which typically are pushed and/or pulled by friends and acquaintances affectionately known as “Sherpas.”

Here’s a look at some of the options available for accessible hiking, skiing and general outdoor fun.

Among the better known of such conveyances is the TrailRider, developed in 1995 for the British Columbia Mobility Opportunities Society (BCMOS) in Vancouver, B.C., Canada. 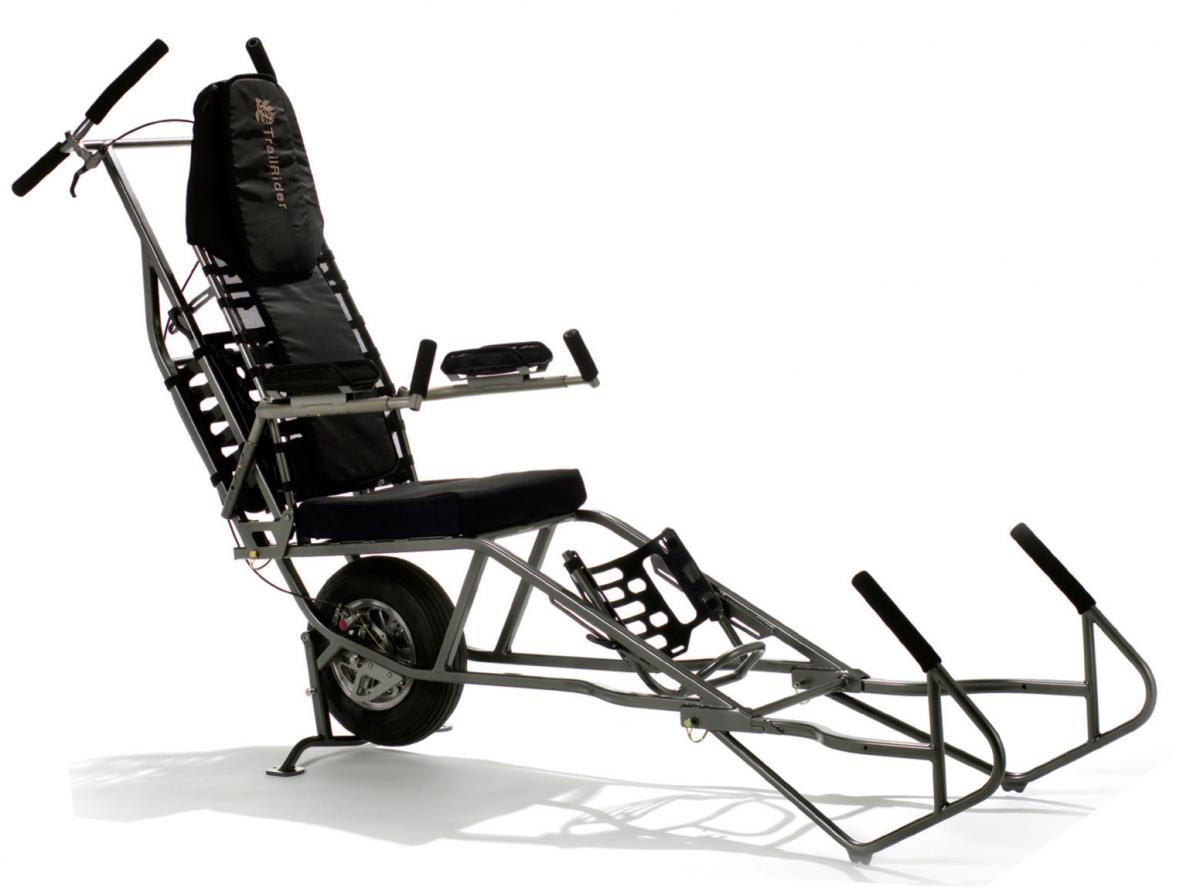 The single-wheeled TrailRider, which looks like a cross between a rickshaw and a wheelbarrow, has trundled riders throughout wilderness areas in the United States, Canada and the Himalayas, and twice has made the 19,334-foot ascent of Mt. Kilimanjaro, the highest peak in Africa.

The mountains of New Hampshire aren’t quite that high, but they’re definitely not accessible to typical wheelchairs. Martin Wallem, 41, of Epping, N.H., was an avid outdoorsman before developing ALS (amyotrophic lateral sclerosis, or Lou Gehrig’s disease). Now almost completely paralyzed, Wallem has made half-a-dozen trips up and down mountainous New Hampshire trails thanks to the TrailRider and a cadre of “Sherpas” sometimes numbering 20 or 30. He says that being able to revisit his favorite haunts despite ALS has brought him great joy.

The TrailRider, which offers an optional seatback insert for children, weighs 51 pounds, has disc brakes and folds for transport.

With a base price of about $6,800, the TrailRider isn’t inexpensive, but it often can be rented (or sometimes e 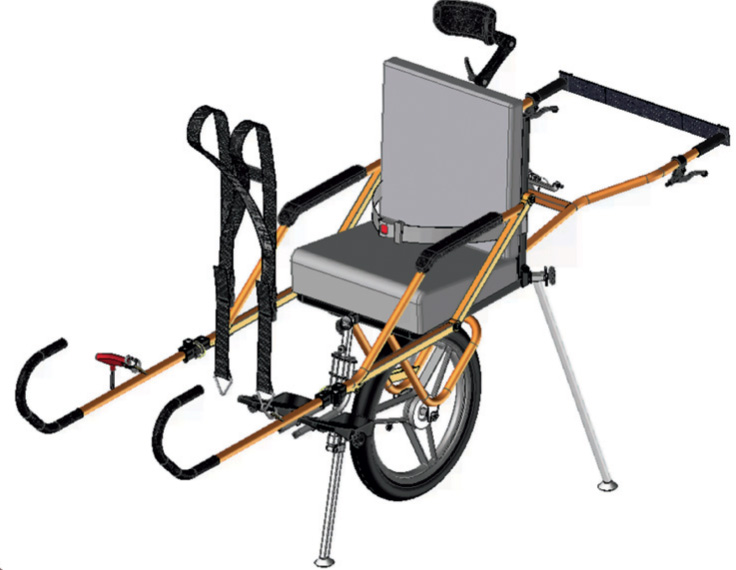 ven used at no cost) at facilities offering adapted sports programs for people with disabilities. The BCMOS website lists many locations at which the rig is available.

Like the TrailRider, this French machine made by Ferriol Matrat rolls along on a single wheel. It utilizes drum brakes, has folding legs to keep it from falling over when stopped, is pushed/pulled by two or more attendants and folds for transport. Due to its mostly steel construction, it tips the scales at 57 pounds.

Base price, through Spokes ‘n Motion in Denver, is $6,000. (Note: Prices may fluctuate due to availability and changes in currency exchange rates. Shipping, handling and insurance costs also may apply.) 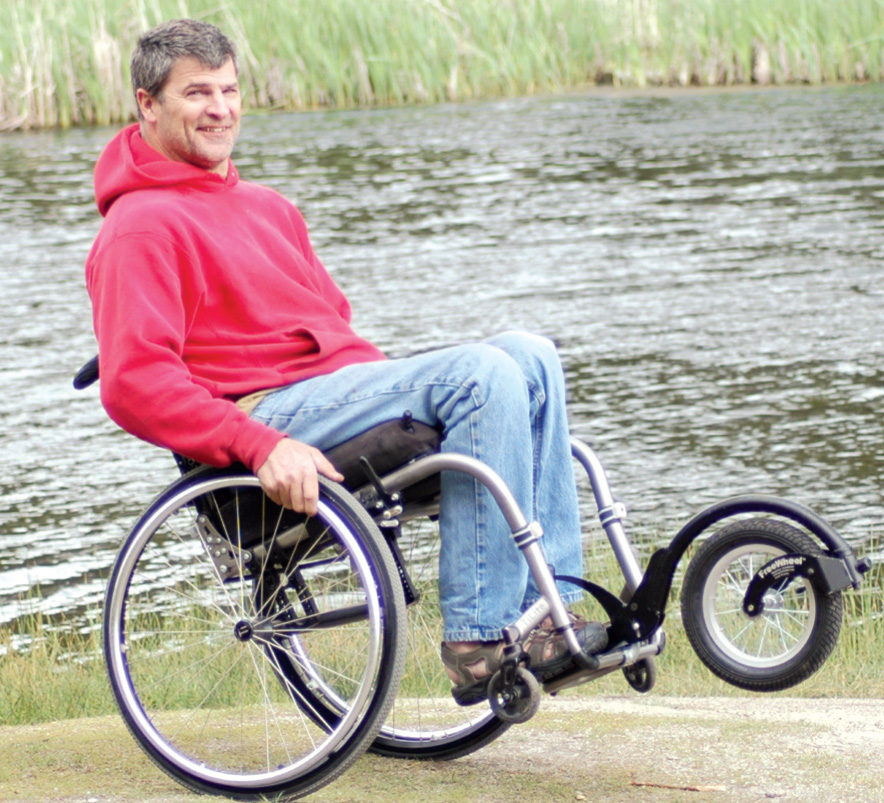 Apart from the two Canadian firms mentioned above, companies in France and Germany make most of the recreational conveyance units on the market, selling their machines through distributors in the United States.

One reason for this, said Spokes ‘n Motion owner Paul Speight, is that countries with socialized medical systems may pick up the tab for custom recreational devices. People in the U.S. must pay for the machines themselves, unless their insurance policies afford coverage or they have other coverage, such as through the Veterans Administration.

A company in Boise, Idaho, GoFreeWheel, markets a one-wheeled gizmo that attaches to the front of manual 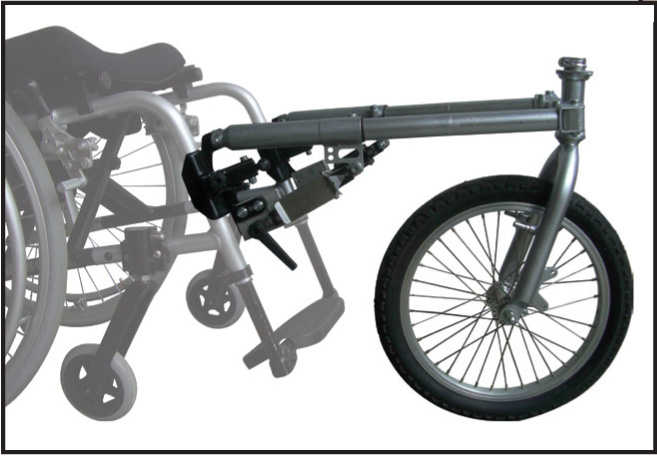 wheelchairs with rigid footrests, adding greater stability and maneuverability to rides. The wheel can be locked in a straight-ahead position or released for side-to-side movement.

The aluminum FreeWheel weighs a scant five pounds and costs $500, plus shipping. When not needed, it rides in a “perch” (included in the price) on the back of the wheelchair. 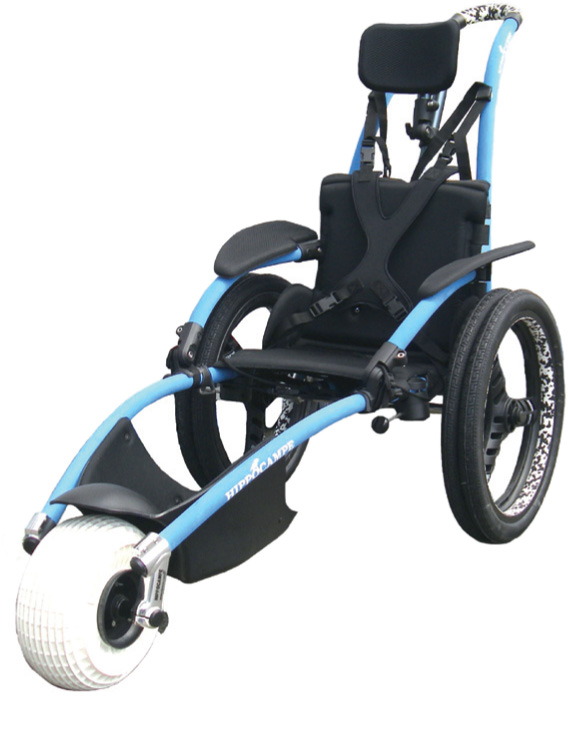 ts that clamp to the chassis of both fixed frame and folding wheelchairs. The distributors’ literature says the Lomo 360 facilitates wheelchair travel over “rocks, cobblestones, pathways, uneven terrain and snow.”

Made by Stricker in Germany and distributed in the United States by Broadened Horizons and Spokes ‘n Motion, the Lomo folds easily for transport and weighs about 13.5 pounds (the frame is steel). Its base price is around $1,500. Optional accessories include handlebars and a luggage rack.

For users with hand and arm dexterity and strength, the Lomo is also available in models with handlebars and electric drive motors.

Hippocampe for wet and wilderness

Billed as an all-terrain or beach wheelchair, depending on its configuration, the Hippocampe is a three-wheeler that weighs only 31 pounds, but will accommodate a passenger of up to 242 pounds. It comes in four sizes to accommodate users ranging in height from less than 4 feet, 7 inches to more than 6 feet, 3 inches. Optional accessories include a removable push bar, adjustable back, armrests and a clip-on ski kit that allows the chair to be pushed over flat snow-covered surfaces. The rear wheels are extra-wide spoked pneumatics, while the front is a chubby low-pressure tire; if needed, the rears can be changed to fat beach tires. 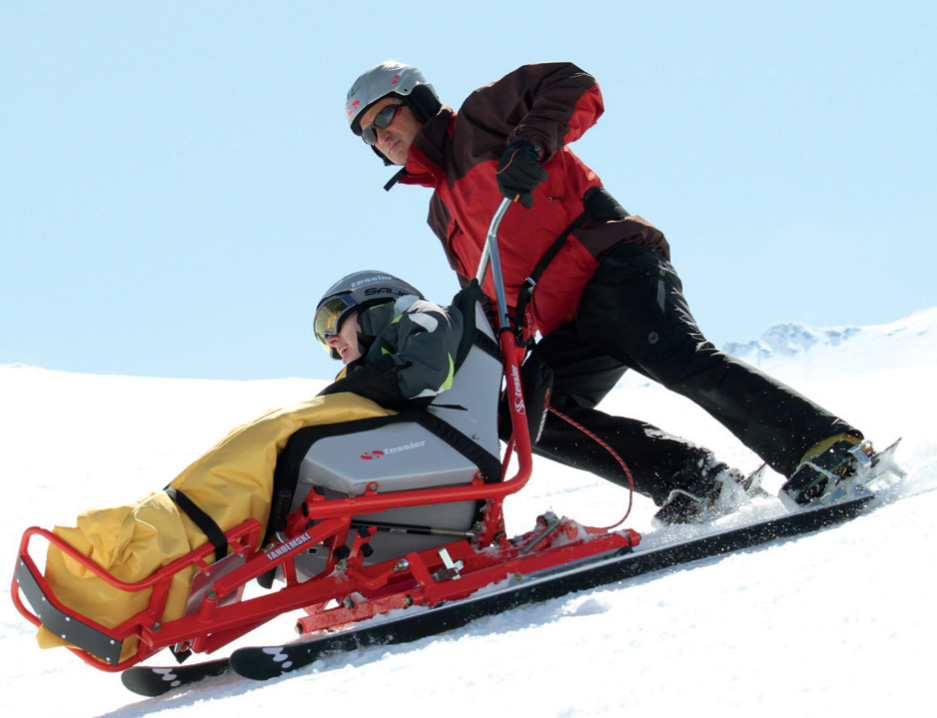 French company Vipamat makes this machine and distributes it in the U.S. through Spokes ‘n Motion and Scooter Direct. Price is about $2,800.

For the slopes: The Tandem Flex

When hiking trails are buried in snow, ski resorts with adaptive equipment such as the Tandem'Flexcan offer plenty of thrills for people who are nonambulatory.

French company Tessier manufactures the Tandem'Flex and distributes it in the U.S. through Spokes ‘n Motion, with a price tag starting at about $7,000. The unit is essentially a ritzy recliner on skis, steered by a pilot who stands on the rear of the skis in articulated skates that also act as brakes. The passenger is bundled up and strapped into the recliner, usually wearing a protective helmet. Once heading down the slopes, the pilot need only tilt a handlebar to either side to make turns on the edges of the skis.

As with the TrailRider, Tandem'Flex are offered as low-cost or no-cost equipment as part of some adaptive recreational programs across the country.

Where to find off-road rigs for wheelchair users

Adaptive Information Resource Center
(877) 679-2770 — Colorado
(866) 679-2770 — Chicago
(855) 276-2336 (toll free)
The website above lists adaptive recreation organizations by state. Some of them offer the use of specially designed recreational vehicles described in this article.

Editor's note (8/13/12): This article was corrected by removing reference to power wheelchairs in the section describing the FreeWheel. The FreeWheel works on manual wheelchairs only.