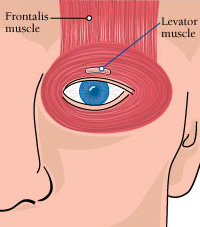 “There are three ways to correct eyelid ptosis [drooping], and each relates to a different muscle that raises the lid,” says Elizabeth Bradley, a surgeon in the Department of Ophthalmology at the Mayo Clinic in Rochester, Minn.

In addition, she notes, some patients with OPMD and droopy eyes undergo an operation to remove extra skin around the lids.

With any of these procedures, patients typically receive local anesthesia and intravenous sedation, although general anesthesia can be used.

Some patients with OPMD start with a “blepharoplasty” (plastic surgery on the eyelid), a procedure that’s often done in people who don’t have OPMD but whose eyelids have sagged with age. “If they have excess skin weighing down the lid, it’s an extra force the weak muscle has to counteract, and they may get some lid elevation if we take it off,” Bradley notes.

The earliest procedure that directly addresses muscle action in the OPMD-affected eyelid is an operation on the “levator palpebrae superioris.” This muscle, a lifter of the upper eyelid, is the main muscle that raises the lid and one that weakens significantly in OPMD.

“When OPMD is still quite mild, we can often do surgery on that muscle,” Bradley says. “That’s called an ‘external levator advancement.’ We go through an external incision in the eyelid crease and tighten the muscle.” The procedure can be done under conscious sedation or general anesthesia.

Muller’s muscle also plays a role in raising the lid, and it’s not affected in OPMD, Bradley explains. Unlike the levator, which is a voluntary muscle, Muller’s muscle is under the control of the autonomic (automatic) nervous system. When the levator is very weak, tightening Muller’s muscle can increase lid opening by about 2 millimeters (0.08 inches).

To see whether an operation to shorten Muller’s muscle will be helpful, the patient is given an eye drop that makes it contract. If the eye drop helps significantly with eye opening, the patient is considered a candidate for a “Muller’s muscle conjunctival resection,” or MMCR. In this procedure, the muscle is shortened while the patient receives local anesthesia and conscious sedation.

The MMCR is an operation Bradley likes to perform when ptosis is too far advanced for a levator advancement but not yet maximally severe.

At the final stage of severe ptosis, the operation of choice is the “frontalis sling,” Bradley explains. The frontalis is a muscle in the forehead that’s not affected in OPMD.

“When they have severe enough ptosis that we can’t do an MMCR and the levator is so severely affected that we would not expect improvement with a levator advancement, we do a frontalis sling,” Bradley says. “We put in a silicone sling that couples the frontalis muscle more directly to each eyelid. When they raise the forehead, the lids go up.”

There can be complications with eye surgery, Bradley notes.

It’s extremely rare, but there can be bleeding behind the eye, which can interfere with vision.

Anesthesia-related complications are not common in OPMD. However, theoretically, anyone with a muscle disease can have an unexpected adverse reaction to inhaled anesthetics or muscle relaxants, and the surgical team should be informed about the pre-existing condition.

And, Bradley says, 5 percent to 10 percent of the time, with any of these procedures, there’s a need to reoperate within the first two months after surgery, because the treatment hasn’t worked.

Most of the time, she says, the procedures, if properly performed and done at the right time in the disease progression, are effective, and patients tend to have “less discomfort than they had anticipated.”

For help finding a surgeon who specializes in eyelid surgery, consult the American Academy of Facial Plastic and Reconstructive Surgery at www.aafprs.org or (703) 299-9291.