One Giggle at a Time 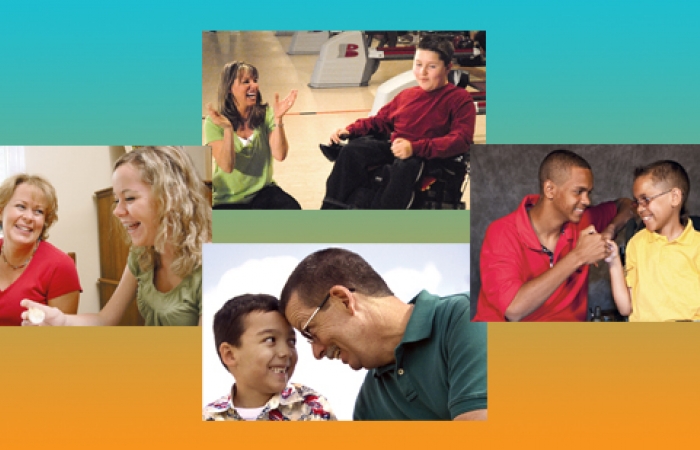 A long-term caregiver reveals her secret for survival

While cleaning a messy drawer, I began to smile and then chuckle at the foolish objects I have kept. When will I ever need a used twisty tie or a bent nail? And then there are the keys that don’t seem to fit anything. Am I just deceiving myself in believing these should be saved? Don’t laugh at me, laugh with me.

I believe laughter can change the world, one giggle at a time. Come on, give it a try.

In our chaotic world today, there are so many worries. In fact, if we focus on the negatives in life, we are certain to frown more often than not. That’s why I’m so convinced that amusement and delight are deliberate choices. Start smiling, and you’ll begin to feel more contented.

I like to smile at people as they walk past and see if they will grin back at me. Most people just stroll on by, but every now and again someone will return the smile. As soon as I get one participant, I want another. A smile is energizing and addicting.

Once, as I was out Christmas shopping at the mall and hurrying to find that last perfect gift, I smiled at a woman walking toward me. She walked on past with no acknowledgment she had seen me until I heard her comment to her companion. “Did you see that lady? She’s the first person I’ve seen smiling today.” That startling observation stuck with me. Here we were Christmas shopping, and no one appeared cheerful.

My son, Joe, was diagnosed at age 1 with type 1 spinal muscular atrophy (SMA1). His prognosis was that he would not live past age 2. Yet Joe spent almost 25 years learning to maneuver through life with his illness. He could have allowed SMA1 to rule his life, but instead he developed an enthusiastic sense of humor and refused to allow negativity and misery to saturate his life.

I firmly believe that laughter and a positive attitude added years when doctors were unable to medically account for his stable health.

Joe’s entrepreneurial spirit joined with his sense of humor as early as 7 or 8 years old. Family and friends would give Joe a quarter to repeat the words “not the mama” from the “Dinosaurs” television show. His squeaky soft voice was so adorable. Along with Joe, we would all explode into laughter. Of course, this prompted many more quarters going into his small hand. So it was clear that he wasn’t a one-note entertainer, Joe also could break into song or mimic the voices of his favorite cartoon characters for a quarter or two.

Since Joe’s scoliosis was very advanced at an early age, he wore a body jacket brace around his abdomen to prevent further damage to the spine and provide some degree of stabilization as he sat upright in his wheelchair. One day while visiting friends, Joe stretched out on their sofa to rest his back. A little girl watched as I loosened the straps on the brace and, pointing to the brace, asked, “What’s that?” We replied that this was his turtle shell, just like the Teenage Mutant Ninja Turtles. She found this very exciting, since of course she thought, “He’s a real turtle!”

Not PC but still funny 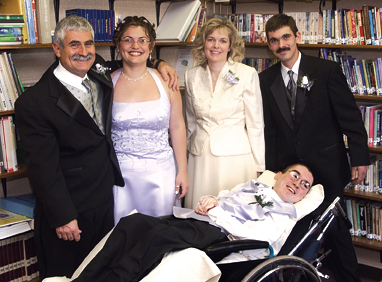 Joe’s cousin, diagnosed with SMA prior to Joe’s birth, was someone Joe could talk to about his physical limits who understood this life more intimately. Together, their offbeat humor was not considered politically correct. I usually could hear them howling with laughter, and when I entered the room, all became quiet. They explained that there were certain jokes and terms they felt entitled to use which are considered off limits by others attempting to be more culturally sensitive.

Sometimes I’m hesitant about revealing Joe’s type of humor as he grew into adulthood, but I’m confident that I should allow Joe to be viewed as the grown man he was and not the eternal cherubic child a mother’s eyes continue to see. Joe and his cousin did not hesitate to refer to themselves as “cripples,” a term defined as someone partially or totally unable to use one or more limbs. Please do not become offended but attempt to understand that we all deal with difficult situations in our own unique way. Joe never referred to others in this way, just himself.

As Joe got a little older and his scoliosis caused even more pain for him, it became necessary for him to remain flat on his back. This eased the discomfort and also allowed him to breathe easier. Because of this, activities of daily living such as bathing caused us to become more creative. We used an inflatable bathtub, which was set up right on the bed. Since Joe had a camera attached to his bedside computer work station, he would often joke that the webcam was operating and we were broadcasting a new online program called “BathingGimps.com.”

All the way up to the point when Joe was transported by ambulance to the hospital for his final day, he was joking that his female driver was “hot” and that he had been “hitting on her.” Joe always used his humor to make situations more tolerable. Who knew this would be the last time we would hear him laugh? (Joe passed away on April 10, 2008.)

There is research showing the health benefits of laughter. It appears to contribute to reduced blood pressure, heart rate and cholesterol, as well as promoting improved circulation.

Of course, all of this has been known since Biblical days: “A cheerful heart is good medicine …” (NIV, Proverbs 17:22).

How can you keep laughing when times are tough? Being a caregiver is a full-time commitment and most days there’s probably not a lot to laugh about.

After years of struggling to keep my head above water and attempting to maneuver the daily obstacles, I had a revelation. I do not need to have every solution nor am I expected to be perfect. After realizing that I could not snap my fingers and change my son’s health situation, I determined that I was able to be in command of my attitude.

I made a plan that day to make every day the best day possible for my son. Some days that meant we were having tacos for dinner — Joe’s favorite. Other days, I played online video games with him while I temporarily forgot about the housework. Since Joe was an aspiring comic book writer, my husband and I made sure he was at the theater on opening day for the Spider-Man and X-Men movies.

Once I was convinced I was doing my best for Joe, my heart was lighter and I felt able to enjoy life more abundantly. We get one opportunity to enjoy today, and I want to live with as few regrets possible.

So, look for the hilarious in life’s everyday situations. Watch programs where you can’t resist the urge to fall down laughing. (My favorites are usually the old-timers such as “I Love Lucy” and “The Andy Griffith Show.”)

I guess it doesn’t matter how old we are; we can find something to chuckle about if we are looking closely enough.

I choose laughter and if you are around me long enough, I will be making an effort to get you to giggle too.

Freelance writer Debbie Button lives in Jarrettsville, Md., with her husband, Robert. Together they own and operate Robert Button Trucking, a water delivery business. Debbie has written a cookbook for people with swallowing difficulties called “I Can Eat That!” It’s available for $15 at www.debbiebutton.com/home; by phone at (410) 879-7717, or by mail at 2748 Sharon Road, Jarrettsville, MD, 21084.