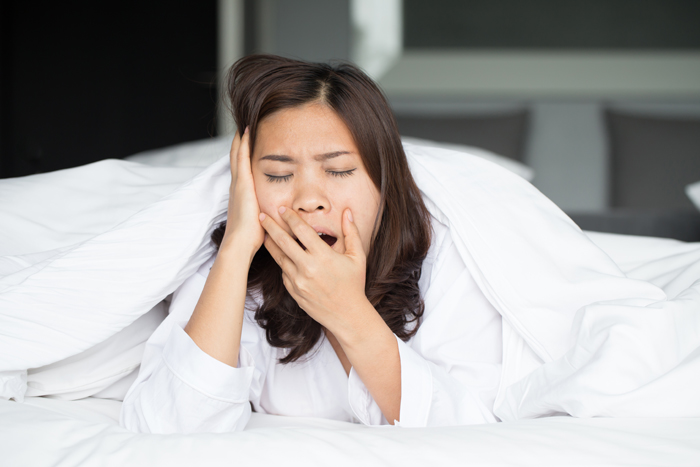 In people with neuromuscular diseases, testing for sleep-breathing problems can be tricky but worth it

Do you suffer from sleep disturbances — snoring, choking or gasping, or restless tossing and turning?

Do you wake up in a sweat in the middle of the night, or arise in the morning feeling fatigued, or with headaches, sore throat or dry mouth?

Do you experience memory and concentration problems, or find you’re excessively sleepy during the day, falling asleep when you normally shouldn’t, such as during eating, talking or driving?

If you answered yes to one or more of these prompts, you may want to talk to your physician about the possibility that you’re experiencing nighttime breathing problems, and discuss how to go about determining whether that’s the case. Not only do untreated sleep-breathing problems interfere with daytime activities, but some research also suggests that they may actually contribute to muscle weakness. 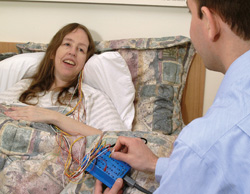 Some studies have shown a high incidence of sleep respiratory problems in people with neuromuscular diseases. But the cause of these problems may be different than for those without these types of diseases.

Among the general population, common causes of respiratory problems during sleep include pauses in breathing (apnea) either caused by brain abnormalities (called central apnea), or by collapse of the upper airway, blocking breathing (called obstructive apnea).

But for those with neuromuscular diseases, breathing problems during sleep may be caused or complicated by the fact that the muscles that aid respiration — the diaphragm and intercostals (between the ribs) — have been weakened by disease.

A simple method used to assess nighttime breathing difficulties is to measure exhaled carbon dioxide in combination with pulse oximetry, which painlessly measures blood oxygen levels through the placement of a small clip on a finger or toe. Typically these tests may be done at home, overnight while the person sleeps.

A more sophisticated assessment tool is a sleep study or polysomnogram (PSG), which pinpoints the causes of fragmented or disrupted sleep through a combination of measurements, including: encephalographic (brain) activity, eye movement, muscle activity, heart rhythm, respiratory effort, nasal and oral airflow, oxygen saturation, carbon dioxide levels, limb movements and snoring. Polysomnograms are performed in a specialized sleep laboratory or sleep center, and can last several hours. (See “If your physician prescribes a polysomnogram” in section below)

For the general population, continuous positive airway pressure, or CPAP, is the ventilation therapy commonly prescribed for obstructive apneas. CPAP blows in a continuous flow of air at a set pressure, keeping the airway from collapsing and obstructing breathing.

But for people whose problem is caused by weak respiratory muscles, bilevel positive airway pressure ventilation, typically called BiPAP, is more commonly used. (BiPAP is a registered trademark of Respironics.) Air is administered at a higher pressure level on inhalation and a lower (or zero) pressure on exhalation, so the patient doesn’t have to breathe out against pressure – something that’s difficult to do with weakened respiratory muscles.

In muscle diseases, the BiPAP “span,” or difference between the inhalation and exhalation airflow pressures, is typically high to provide greater assistance to the inspiratory muscles and little or no resistance during exhalation.

Because ventilation therapies for people with weak muscles are different than those used for obstructive apneas, it’s important that your physician is highly skilled at analyzing test results and knows which therapeutic solutions are appropriate for people with neuromuscular diseases.

In patients with neuromuscular disease, Bach determines the need for ventilatory therapy by assessing symptoms and measuring exhaled carbon dioxide and vital capacity while the person is sitting and lying down. If those measurements don’t yield useful information in the clinic, he has patients do them at home overnight.

Patients showing signs of hypoventilation should be offered a trial of nocturnal ventilation, Bach advises, “and if they feel better using it, let them do so.”

Bach questions the usefulness of polysomnograms for people with muscle diseases because the test “interprets all abnormalities as central or obstructive apneas rather than muscle weakness,” he says — especially when read by physicians unfamiliar with neuromuscular disease.

This misdiagnosis then leads to improper treatment, he says.

David Rye, professor of neurology at Emory University in Atlanta and director of the Emory Healthcare Program in Sleep Medicine, echoes Bach’s concerns about the possibility for misinterpretation of sleep study results.

“There is really nothing that directly measures ‘effort’ or ‘depth’ of breathing on the sleep study,” he says. “It takes a very trained eye to pick it up. Thus, most patients probably get put on CPAP but would do better on BiPAP.”

Unlike Bach, however, Rye says polysomnograms can be very helpful in evaluation and that they aren’t ordered frequently enough.

Rye finds that PSGs are sensitive to the earliest signs of nocturnal hypoventilation, which, in neuromuscular disease, typically express themselves first in the rapid eye movement (REM) phase of sleep when muscle tone is low and respiratory function is most dependent on the diaphragm.

He notes that physicians often wait until patients are showing hypoventilation symptoms such as those listed at the beginning of this article before ordering tests, when in fact earlier sleep studies might prove valuable in treating muscle diseases.

Physicians are “probably treating later in the course [of the disease], and it’s unclear whether earlier recognition and treatment of sleep-disordered breathing would really change the course of the disease,” says Rye. “Those studies are needed.”

One study that lends credence to Rye’s speculation was done by MDA grantee Tejvir S. Khurana at the University of Pennsylvania, and colleagues. Khurana’s team has preliminary evidence that insufficient oxygen (hypoxia) causes damage to respiratory and other muscles. Khurana hypothesizes that weakened respiratory muscles cause hypoxia, which then weakens the muscles further, setting up a vicious cycle. 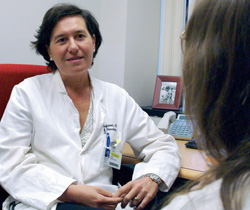 Oximetry can detect if your oxygen goes down at night, but it’s not as sophisticated as a sleep study because it doesn’t tell you why the oxygen goes down,” says Emma Ciafaloni, a neuromuscular neurologist at the University of Rochester in Rochester, New York. “Oximetry is useful, but rudimentary — it only tells you part of the story.”

Ciafaloni says she often orders polysomnograms for her patients with neuromuscular diseases, but cautions that the tests can be misinterpreted in this population. “It’s a very understudied area. There are no guidelines. Nobody has really looked in a systematic way to see what exactly the needs are and what should be done with the results of the polysomnogram.”

She adds, “My opinion is we probably should order more polysomnograms than we currently do. In patients with neuromuscular diseases, if their doctor proposes that they have a sleep study, I would take that as a positive thing, because most of the neuromuscular diseases essentially put you at risk of hypoventilation at night.”

Ciafaloni points out that, because most neuromuscular diseases have no treatment or cure, anything that can be done to improve quality of life should be done.

“For example, take fatigue,” she says, noting that fatigue can be caused by more than just muscle weakness. “It could be because [the person] is hypoventilating at night, and that portion is fixable. Early on, it could really make a big difference in the life of the patient. Sleep apnea or hypoventilation at night could be the cause, and we can help.”

For that reason, Ciafaloni says polysomnograms should be ordered more frequently and sooner in the course of disease. If people have access to it, and their physician orders it, she adds, “they should go for it.”

Also of the opinion that oximetry isn’t sufficient in testing for nighttime breathing problems is neurologist Michael Yurcheshen of the University of Rochester’s Strong Sleep Disorders Center, who says the biggest concern with patients with neuromuscular disease and nocturnal breathing difficulties is that “they do not present often enough to sleep disorders specialists.”

“In this community and others, patients are prescribed BiPAP on the basis of nocturnal oximetry alone,” Yurcheshen says. “Although this is a reasonable screen for sleep-disordered breathing, it is by no means complete. The breathing picture in these patients is often much more complex.”

Yurcheshen says BiPAP is “a very good treatment, especially in those patients with hypoventilation.” He cautions against the prescription of BiPAP, however, without consultation from a sleep specialist, and without a monitored BiPAP titration (a test used to determine the most effective ventilator pressure settings), in order to ensure the most effective treatment with positive airway pressure therapy.

Make sure you get a knowledgeable interpretation of a polysomnogram — or any other evaluation for problems associated with nighttime breathing issues says Nancy Collop, a pulmonary medicine and critical care physician at Johns Hopkins University and a board member of the American Academy of Sleep Medicine.

“There are clearly nuances [in sleep studies] that might be missed or misinterpreted by people with inadequate expertise,” Collop says. She suggests consulting an experienced, certified sleep specialist who knows both the patient’s history and the effects of neuromuscular disease on sleep and breathing.

Donna says going through the sleep studies has been easy in comparison with everything else she and her family have been through in dealing with mitochondrial myopathy, though she admits it was “nerve-wracking in a sense,” not knowing what the results might bring.

“It confirmed, but it also comforted,” she admits, explaining that the greatest benefit to having the sleep studies done was getting answers to explain some of her children’s symptoms.

“Getting a good night’s sleep and having it be the best sleep and most restful type of sleep allows [the kids] to conserve some energy so they start the day feeling a little better,” Donna explains, adding, they “can get that little extra boost and actually be able to play a bit more, learn a little more and simply have some fun. Instead of running on empty their whole day, they get to experience a little more.”

“It’s very important – it can save a life,” she says. “It honestly makes the quality of life so much better.” 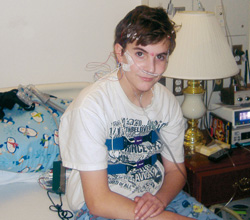 The Thorells all have mitochondrial myopathy; Timothy received a confirmed diagnosis following a muscle biopsy in 2005, and the rest received their diagnoses based on clinical symptoms.

Kristofer was the first to have a polysomnogram, in 2001.

“We knew that he had a muscle disease — we weren’t sure what at the time,” Donna says, adding that the results of Kristofer’s polysomnogram were a piece of the puzzle that “put us on the path to figuring out it was mitochondrial myopathy.”

Joshua, Kristofer and Timothy all use nighttime ventilation. Lianna also has been prescribed nighttime ventilation, but must have a titration sleep study first, where a sleep physician will test to determine which pressure settings work best to improve her breathing and, by extension, her sleep.

If Your Physician Prescribes a Polysomnogram ...