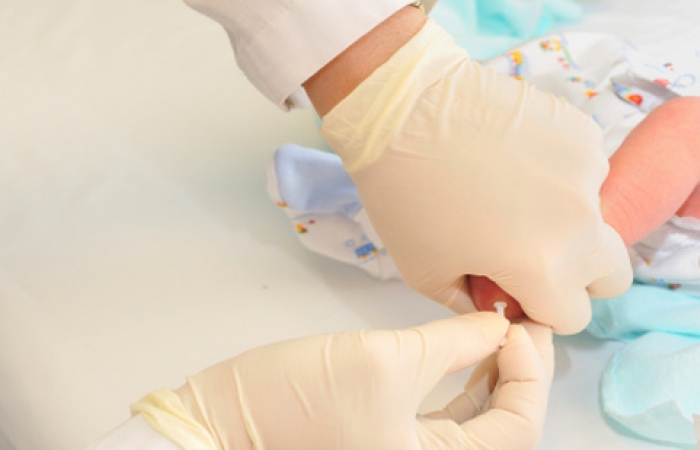 The Discretionary Advisory Committee on Heritable Disorders in Newborns and Children (DACHDNC) today voted to add Pompe disease (acid maltase deficiency) to a list of diseases that it recommends states screen for in newborns.

The list is known as the Recommended Uniform Screening Panel (RUSP).

In general, the conditions that are recommended for the newborn screening panel are those that can be detected soon after birth by a reliable test, and are likely to benefit from early diagnosis and treatment.

A majority of the committee members — 11 of 13 — voted to move the proposal to add Pompe disease to the newborn screening list to the U.S. Secretary of Health and Human Services. The Secretary has to provide final confirmation.

The DACHDNC was established earlier this year to fulfill the role that previously was performed by the Secretary's Advisory Committee on Heritable Disorders in Newborns and Children (SACHDNC).

In a pilot program for screening babies for Pompe disease in Missouri, a two-tiered approach to testing is being used. The baby's blood, taken from a heel stick and put on a card (known as a "dried blood spot"), is screened for the acid maltase (also known as the GAA, or acid alpha glucosidase) enzyme. If this screen suggests an enzyme deficiency, parents are asked to bring the baby back in for another blood draw, which is then used to measure the precise enzyme level and to detect a possible mutation in the acid maltase gene by DNA testing. This procedure may or may not become the testing standard.

It's estimated that states will require between one and five years to equip themselves to perform the requisite testing, train staff and develop referral networks for follow-up care of babies who test positive for Pompe disease. States have different approaches and resources for implementing newborn screening, and they are not necessarily required to add a condition to the state's list just because it's on the federal RUSP.

Since 2006, when the enzyme replacement therapy Myozyme was approved by the U.S. Food and Drug Administration, there has been an available treatment for Pompe disease in the United States. Evidence shows that early treatment saves lives and improves health for patients with the infantile-onset form of the disease, but there are no data yet indicating that treatment in early infancy benefits those predicted to develop the late-onset form.

The testing that's been proposed would detect both forms of the disease, which concerned some committee members, since it is not clear what treatment or surveillance should be offered to babies predicted to develop Pompe disease later in life.

That didn't prevent the committee's passing of the proposal to add Pompe disease to the RUSP. However, it did prompt it to make an additional recommendation to the Secretary of Health and Human Services that data should be gathered on babies predicted to develop late-onset Pompe disease. At this time, the tests cannot accurately predict the timing of late-onset Pompe symptoms, and it isn't known how or whether early treatment will change the disease course.

Although population-based testing of all newborns for Pompe disease has not been recommended in the U.S. until now, genetic testing and GAA enzyme testing for families with a history of the disease and for children or adults with symptoms has been available for several years at many laboratories. Some also offer prenatal and carrier testing.

Check with your MDA clinic physician or genetic counselor, and see genetests.org.

To learn more, see Newborn Screening for Neuromuscular Diseases, a center on the MDA website.