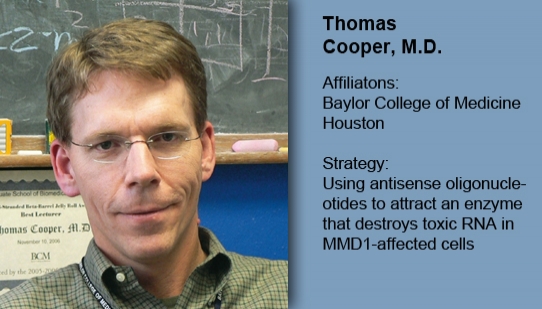 Thomas Cooper, a professor in the Department of Pathology and Immunology at Baylor College of Medicine, is a longtime MDA research grantee who has current MDA support to develop oligonucleotide-based therapies for myotonic muscular dystrophy (MMD, also known as DM).

Margaret Wahl, MDA's medical and science editor, talked with Cooper about his research.

Q: What's the goal of using antisense oligonucleotides in MMD? Is it to block the interaction between the CUG repeats and other molecules, or to degrade these repeats?

A: It's both. There are different approaches.

The second approach, which is a different kind of antisense oligonucleotide, is to degrade [destroy] the RNA with the CUG repeat expansion. That's the approach that we've been using and that's been funded by MDA.

Q: How does the antisense oligonucleotide that you're using destroy the expanded RNA?

A: It doesn't do it directly. It attracts an enzyme called RNase H that destroys it.

Q: How does that work?

A: RNase H is in the cell nucleus, and its usual function is to seek out and destroy RNA that's paired with DNA. That type of RNA needs to be short-lived, so the cell wants to get rid of this hybrid molecule.

The antisense oligonucleotide that we put in as a potential therapy is modified DNA. It's specifically designed to bind to CUG repeat expansions in RNA. When it does that, the resulting construction looks to the cell like a DNA-RNA hybrid — something it wants to destroy.

Q: How do you keep the antisense from sticking to normal-length stretches of CUG repeats in the RNA?

A: It's specifically designed to bind preferentially to stretches of RNA that contain more than the normal number of CUG repeats. In our laboratory experiments, we've found that the antisense oligonucleotides we're using had no effect on stretches of RNA containing 12 CUG repeats, the average number found in non-MMD1 cells.

Q: When the RNase H enzyme comes in, does it take out the whole strand of RNA instructions, or just the CUG repeat-containing part?

We now have two shorter RNA strands: The free ends where we clipped out that small piece with the CUG repeats are now exposed. RNA is fairly unstable, once you break it. There are other enzymes in the cell that will quickly jump on those free ends and degrade them.

Q: Could destroying the whole RNA strand cause a problem?

A: Probably not. Remember that, in MMD1, there is one normal gene for the protein known as DMPK and one abnormal one, with the CUG repeat expansions, in each cell nucleus.

Theoretically, we're only destroying the DMPK instructions that contain the CUG repeat expansions, leaving the ones without the expansions alone.

Evidence suggests we don't need too much DMPK protein, so it's likely that enough of it can be made from the instructions that aren't expanded and won't be targeted.

Q: What did you see when you injected CAG gapmer antisense oligonucleotides into a leg of a mouse with an MMD1-like condition?

A: This mouse contains pieces of DMPK RNA with 960 CUG repeats. We saw the amount of RNA that contains the expanded repeats decrease by 50 percent in the mouse muscles that got the treatment compared to the muscles that didn't get it.

We also saw a 40 percent reduction in abnormal clumps of RNA stuck to muscleblind protein.

And we saw a partial restoration of correct RNA splicing, a crucial step needed for protein synthesis, in the treated muscle fibers. A normal function of muscleblind 1 is to participate in the splicing process, so we believe at least some muscleblind 1 was freed from its RNA trap to do this.

Q: Do you think this same approach would work for type 2 myotonic dystrophy, where there's a CCUG repeat in the RNA?

A: Yes, I think it would probably work the same way for type 2, although we've only tested it in mouse and cell models of type 1.

Q: What are some caveats with this approach?

A: One important caveat is that we don't know to what extent our mouse model — or any mouse model — really mimics the human disease. These mice are probably expressing a lot more RNA than would be expressed in any human cell. But expressing huge amounts of RNA might not be the right thing to do. The question you have to ask is, are you reproducing what's happening in the human disease?

Q: Do you think this type of treatment is something we're likely to see during the lifetime of anyone who has myotonic dystrophy today?

A: Several labs are producing promising results with antisense oligonucleotides. I hate to be overly optimistic, but I have to say, I'm very enthusiastic.