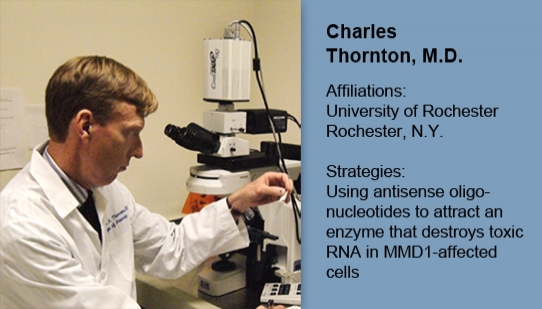 Charles Thornton, a professor of neurology at the University of Rochester (N.Y.), has received MDA support for research in myotonic muscular dystrophy (MMD, also known as DM) and other neuromuscular diseases. He's currently developingantisense oligonucleotides and small molecules for MMD. Thornton also co-directs the MDA clinic and directs the MDA/ALS Center at the University of Rochester Medical Center.

Q: When designing a therapy for type 1 or 2 myotonic dystrophy, is it better to interrupt the interactions between the CUG or CCUG repeats and protein molecules, or to destroy the repeats?

A: I think the important point is that there's strength in diversity, having different ways to come at the problem. MDA is supporting several research groups that are using different technologies to develop a treatment for the disease.

All of them are showing progress in one way or another in terms of having some of the intended beneficial effects when they're tested in cells growing in a dish or in a mouse that has some characteristics of myotonic dystrophy.

There might even be a reason to think that these things, if tried together, might have a stronger effect than if tried individually. That hasn't been tested yet, but it could be tested, down the road. There could eventually be combination therapies.

It's too early now to say which of the strategies in development is the best method. They all should be moved forward as efficiently as possible.

Q: Are you hopeful about antisense as a strategy for MMD?

Note: Antisense oligonucleotides are molecules designed to target a specific chemical sequence, generally to block it or destroy it.

A: I'm not going to tell you what I'm going to vote for — small molecules or antisense. If I had to make a guess, I think the first one that will be tested in clinical trials is likely to be antisense because there are some shortcuts in the development process for that kind of drug.

Q: Are there different kinds of antisense that are being tried?

A: Yes. There are different research groups that are trying different types of antisense. They come in different chemical flavors.

Antisense is a chain, and the types of antisense are different in terms of the chemical makeup of the parts that join the chain together — what people call the backbone or framework of the chain.

One approach is to use antisense as a guide molecule that shows an enzyme called RNase H where to make a cut in RNA. You pick the RNA that you want to cut, you design an antisense to couple with it, and then the RNase H cuts the target.

Q: A few years ago, you were experimenting with an antisense compound called CAG25 in a mouse with expanded CUG repeats and an MMD1-like condition.

A: Yes. When we did that, CAG25 was not making a cleavage in the target. It was binding to the RNA repeats, the toxic RNA, but not causing cleavage of it.

Q: What did you hope the CAG25 construct would do?

A: The CAG25 molecule, which resembles RNA, was designed to bind to CUG repeats, and to keep cellular proteins like MBNL1 [muscleblind-like protein 1] from getting stuck on the repeats.

Q: And did it do that in the mice?

A: Yes. The mice had toxic RNA with expanded CUG repeats in their muscle tissue. They were given injections of CAG25 into one leg muscle and injections of an inactive substance into the corresponding muscle on the other leg.

In the CAG25-injected muscles, the MBNL1 protein was freed up, which allowed it to do its normal job in the cell. The muscles treated with CAG25 showed several improvements in structure and function compared to the untreated muscles. In fact, myotonia — the prolonged muscle contraction seen in myotonic dystrophy — was eliminated in the treated mouse muscles.

Q: But you've also used the type of antisense that attracts RNase H, which destroys the expanded RNA?

A: Yes. That's the gapmer antisense work we presented at the International Myotonic Dystrophy Consortium in late 2011. That work was a joint effort with Ionis Pharmaceuticals and Genzyme [now part of Sanofi].

CAG25 is more RNA-like, but the gapmer antisense that we talked about at the conference is more DNA-like — and that's what RNase H is looking for. The job of RNase H is this: Show me where you've got DNA bound to RNA, and that's where I'll try to cut the RNA.

Actually, we didn't target the RNase-H-attracting antisense directly to the CUG repeats in our experiments. We targeted it to a part of the RNA strand that doesn't have the repeats.

An RNA molecule is like a long strand, and if you make a cut anywhere along it, so that it's no longer intact from head to tail, there's machinery inside cells that recognizes that and gets rid of the fragments that are generated by the cutting.

Picture a long piece of spaghetti. Put food coloring over one part of it, towards one end, and call that the expanded CUG repeats: That's the toxic part. If you take a knife and cut that spaghetti at any other place, the entire strand — including the part with the CUG repeats — will be unstable and easily nibbled up by other substances in the cell.

Q: If they nibbled up the DMPK RNA, would that be a problem?

A: That's an important question about the safety of this approach. There's a possibility that the amount of DMPK protein made by the cell would go down even further than it already has. It's already somewhat reduced, and it might be further reduced, which might cause symptoms. Based on animal studies, we're not expecting that that would have strong effects, but we have to monitor this carefully.

Q: What happened to the MMD1 mice that got this gapmer antisense treatment that doesn't target the CUG repeats but causes destruction of the whole RNA piece?

A: The treatment showed some striking effects. We injected the antisense under the skin — systemically — so that it could circulate throughout the body. We gave the antisense injections twice a week for one month. We checked on the mice as early as one week after the injections, or as long as one year later.

After the treatment, we saw large reductions of the toxic RNA, elimination of myotonia, normalization of a process called RNA splicing, and no evidence of harmful side effects. RNA splicing is a process that MBNL1 participates in, so we assume that MBNL1 was free to do its usual job.  A very surprising observation was that the antisense was still active up to one year after the last injection.

Q: You've also experimented with a small molecule called pentamidine to block the interaction between CUG repeats and MBNL1 protein. Can you tell us more about that?

A: Yes. That study was directed by Andy Berglund, a biochemist at the University of Oregon. We helped out with the testing in mice.

Together with Dr. Berglund’s group, we found that pentamidine counteracted some of the effects of the abnormal genetic instructions in mice with an MMD1-like disease. The molecule appeared to inhibit MBNL1-CUG interactions, and there was improvement in some RNA splicing patterns. It was a partial effect, but it was an important start.

A big drawback with pentamidine is that it's fairly toxic. It would have to be chemically modified before it could be considered as a candidate for treating myotonic dystrophy.

That said, it's good to push forward on several different fronts at the same time. Several other groups of chemists are having success also.

Q: Have you tried any of these strategies in type 2 myotonic dystrophy, where you have CCUG repeats causing the problem?

Q: Do you think they would work similarly?

A: It's a little bit different, but I suspect that a similar approach could be used in myotonic dystrophy type 2 to good effect.

Q: Would you expect an antisense-based drug to get into the brain, which also can be affected in myotonic dystrophy?

A: It will have to be specifically put there. There is a therapeutic trial under way in which this type of compound is being delivered into the spinal fluid, for a condition other than myotonic dystrophy, and it's able to reach many parts of the brain. At first glance, this idea doesn't seem very practical, but I suspect that it might prove to have some important advantages.

Q: Would this type of compound get into the heart?

A: It's too early to know, but I think there are reasonable prospects that this could also work in the heart.

Q: If someone who is, say, 30 years old with type 1 myotonic dystrophy were to be treated with something that blocked or destroyed CUG repeats, how do you think it would affect him or her? Would it actually reverse symptoms?

A: I'm glad you asked that question, because I think that's really uppermost in people's minds. I would say that the hope that drives us every day is the possibility of having people take medication that will actually make them feel and function better.

From the experiments that have been done in animals, it's not unrealistic to think that that's a possibility, but we don't really know yet.