Scoliosis and other spinal curvatures are common in neuromuscular diseases and often require surgical correction. Fortunately, today's surgeries are safer and more effective than those of earlier decades. (See Scoliosis Surgery: Setting the Record Straight, January 1997.) 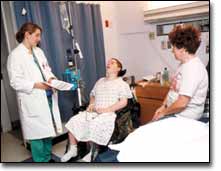 But that doesn't mean they're routine or simple.

"The spine can be compared to an elastic column," says Nancy Miller, the orthopedic surgeon at Johns Hopkins Hospital who operated on Jason Abramowitz. "In the absence of structures that support it, one being muscles, it undergoes a collapse. That collapse is manifested by abnormal curves, of which one is scoliosis."

Bone, including the vertebrae surrounding the spinal cord, "is living tissue," Miller continues. "Bone will gradually deform to the point where it cannot recover itself. You don't think of bone as changing shape, but over a period of time, it will.

A role for braces?

Treatment with bracing "rarely applies" in muscular dystrophy, Miller says. "In medicine, you hardly ever say never," she says. "But you could say that it rarely applies."

In contrast, she says, in spinal muscular atrophy (SMA), there may be a role for bracing, at least in delaying the eventual need for surgery.

"In SMA, for some reason, they usually get scoliosis earlier," Miller says. "Therefore, the use of braces is for a different reason — to keep the curve from getting too advanced too early. It's not used to necessarily prevent scoliosis or to prevent surgical intervention.

"In SMA, they usually get scoliosis at an early age, especially in the type 2 patients, where walking is very limited. They use braces to try to contain the curve to a relatively minimal level until they can get to the adolescent time frame."

Doing surgery too early in SMA, she says, can be a real problem. Approaching the spine from the back only doesn't prevent the front of the spine from continuing to grow if the child isn't fully grown.

That results in a "crankshaft" phenomenon, Miller says, which is "when you have something tethered from the back that is growing in front." This problem can be avoided by either waiting until growth is complete or operating on both the back and front of the spine, which is more complex surgery.

The procedures used to correct scoliosis in DMD and SMA are similar, despite differences in the underlying diseases. Today, doctors usually employ a combination of techniques: straightening the back using a rod that resembles a miniature car jack, fusing a section of the spine's vertebrae by sprinkling bits of bone over it (derived from a bone bank or from the patient), and reinforcing the fusion with permanent hooks, screws and rods (spinal instrumentation).

Although the procedures may be similar in all types of scoliosis, spinal surgery on someone with a neuromuscular disease should bring special concerns to the family's and surgeon's minds.

First, Miller notes, "there's more trouble with wound healing because often the tissues are not normal, and that always gives trouble." (In fact, Jason's wound was slow to heal, and it opened up after surgery.) If nerves and muscles are abnormal, Miller says, "that usually affects the healing processes. You have to just be aware of it. There isn't much you can do about the abnormal nerves or muscles themselves."

Care with anesthesia in neuromuscular disease is "tremendously important," Miller emphasizes. "You need to have anesthesiologists who are experienced in these disorders, who can recognize what's trouble, who know all the issues."

In the immediate postoperative period, Miller notes, good follow-up care, usually at a rehabilitation facility, is important. "These kids live within a limited means of movement, so they have to relearn movements," she says. "Jason moved differently when his spine wasn't fused."

Who's a surgical candidate?

Should everyone with scoliosis and a neuromuscular disease have surgery? Miller isn't so sure.

"There isn't a lot out there regarding the risk-benefit calculation," she admits. "I like to know the family. I don't like to just see them and then say surgery is necessary. There are quality-of-life issues that enter into every family. But, with MD and these disorders, I find if it's not approached at the appropriate time, you have a bigger problem at the end."

If surgery is postponed too long, back pain increases and makes sitting difficult or impossible. Lung function also declines, and the surgery is more difficult.

At the same time, Miller admits that scoliosis correction surgery "is a major change in kids' lives — and adjustments can be difficult."