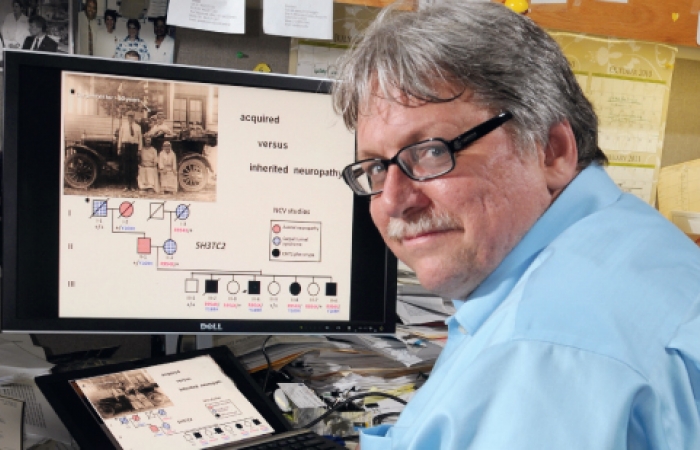 Originally titled in print: Peeking at 'the Cards You Were Dealt'

James Lupski’s story has all the elements of a good sci-fi tale: a research scientist determined to uncover the cause of his own genetic disease, a friend and colleague who’s also an intrepid gene hunter, and a futuristic technology that not only pinpoints the molecular cause of the research scientist’s disease, but also opens the door to a new era of personalized medicine.

But in this case, it’s not science fiction. It’s science fact.

The research scientist is James Lupski, Cullen Professor and vice chair of molecular and human genetics at Baylor College of Medicine in Houston. The disease is Charcot-Marie-Tooth (CMT), which affects Lupski and several family members. The colleague and gene hunter is Richard Gibbs, director of the Baylor Human Genome Sequencing Center.

And the technology that’s positioned to change the field of medicine is the ability to reliably (and ever more affordably) produce a readout of an individual’s entire genetic blueprint, or DNA.

Lupski, 53, grew up in Hicksville, N.Y., one of four (out of eight) siblings found to have CMT, a disease of the peripheral nerves that causes gradual loss of strength and sensation in the feet and ankles, lower legs, and the hands and forearms.

A series of surgeries on his feet and ankles after the age of 15 caused him to miss his sophomore and junior years of high school. In addition to studying at home for a few hours a day, Lupski read books that fostered his interest in science, genetics and medicine. His surgeon became his mentor and encouraged him to go into medicine.

At New York University, Lupski earned a doctorate in biochemistry and molecular biology, and an M.D. He then received clinical training in Houston and board certifications in both pediatrics and medical genetics. Among other professional pursuits, he studied the disease he’d lived with all his life.

Lupski received MDA research funding beginning in the late 1980s and lasting through 2003. In 1991, he and his team identified the first gene to be associated with CMT, PMP22. The gene is responsible for approximately 70 percent of CMT cases.

“MDA was incredibly supportive of our research,” Lupski recalled, “and that is what helped find the first CMT mutation, the PMP22 duplication.”

With continued MDA support, Lupski’s team identified a handful of other genes associated with CMT, including the periaxin (PRX) gene and EGR2 gene.

The MDA funding he received, Lupski said, “was very helpful for getting a lot of the original CMT research up and running — definitely a positive.”

One negative, however, was that none of the various genes discovered to be associated with CMT (there are now more than 20), proved to be the culprit in Lupski’s disease. (For more on Lupski’s early efforts to find the cause of his CMT, see CMT Researchers Tell Their Own Story, Quest, Volume 1, Number 2, 1994.)

The first complete, three-billion-letter, individual human genome was published in September 2007, a feat that was soon followed by efforts to sequence the genomes of people of different nationalities in order to discern genetic variations among them. 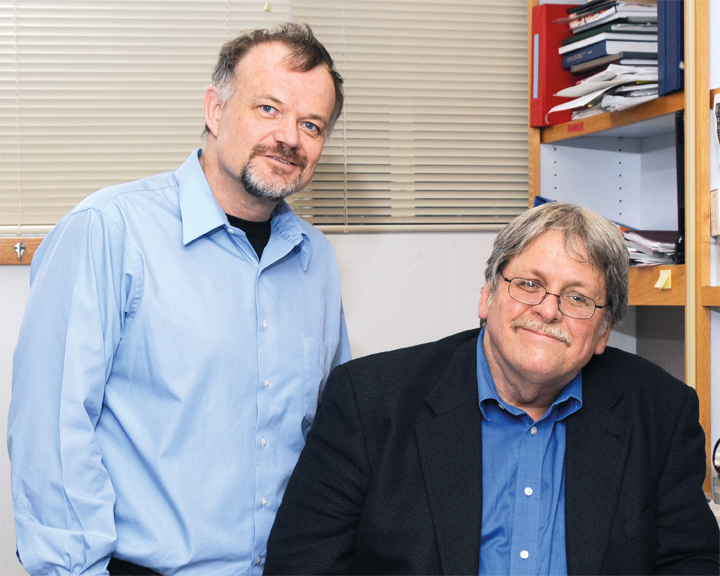 Lupski and his friend Richard Gibbs of the Baylor Human Genome Sequencing Center began discussing what should come next. The two considered sequencing the genome of somebody with a disease as a means of determining whether the technology was robust enough to spot the clinically important gene or genes in the process.

“The real test was, could you find the diseased gene out of a whole genome? And choosing Charcot-Marie-Tooth disease was obvious, because it was my interest for many, many years, but also because we knew enough about the biology to be able to interpret the sequence.”

In the course of talks with Gibbs, Lupski commented that he still hadn’t found the cause of his own CMT.

“Richard said, ‘Well, why don’t we do your genome?’ And I was happy to have it done,” Lupski said.

When Lupski and Gibbs began their study, the standard approach for genome sequencing involved mapping small sections of DNA, “cloning” them (creating copies) and assembling them into ever larger sections, and then putting all the sections together.

Lupski and Gibbs instead took a route referred to as “shotgunning the genome,” devised by biologist and entrepreneur J. Craig Venter. (Venter, founder and president of the nonprofit J. Craig Venter Institute, made headlines this year when researchers at the Institute announced they had created the first self-replicating, synthetic bacterial cell capable of self-reproduction and controlled by the synthetic genome.)

“Let’s say the human genome is a 23-volume encyclopedia, and each volume is like one human chromosome,” Lupski said. The accepted approach used to be to take each volume separately, a process that equates to separating the chromosomes, separating the material into smaller clones, and then separating it further before building it back up.

“Venter’s shotgun approach was, ‘Let’s just take the stuff from the paper shredder.’ That is, shred all 23 volumes into sentences, or snippets of DNA, and then let the computer figure out how those sentences go together to build the entire genome.”

In sequencing his genome, Lupski said, “We just shotgunned. We took the entire genome and just blew it to bits, and took little sequencing reads, only about 50 to 100 nucleotides [DNA base building blocks] each, so it wouldn’t even be a full sentence, it might be more like five words of 10 letters each.”

The pending outcome was a big unknown, Lupski said, but “in the end we hit gold.”

Lupski’s team published results online March 10, 2010, in the New England Journal of Medicine. They concluded that “whole-genome sequencing can identify clinically relevant variants and provide diagnostic information” that can help physicians care for their patients.

Lupski’s CMT, and that of his siblings, turned out to be the result of mutations in a gene called SH3TC2. The original identification of this gene as one associated with CMT actually had come earlier, from a study conducted by a multinational team led by Jan Senderek and published in the American Journal of Human Genetics, October 21, 2003.

Despite this earlier identification of SH3TC2, Lupski had never been able to verify that the gene was in fact the source of his CMT. “We had sent my DNA sample to the laboratories involved in the gene discovery of SH3TC2 and its association with CMT, but the screening methods used at the time apparently failed to identify the mutations,” he said.

“Some people say, well, the gene was known before. It’s nothing new. That’s a correct statement, but it certainly hadn’t been found in me,” Lupski continued. “The gene in my family had not been found, and we tried for 20 years to find it. It wasn’t until we tried this approach that we found the gene, and for that reason we shouldn’t take away from the scientific achievement.”

Ushering in a new era

Prior to the sequencing of Lupski’s genome, all the other genomes that had been sequenced were in individuals with no disease phenotype (observable physical or biochemical characteristics), and the differences were attributable to simple variation, Lupski explained.

“We’ve demonstrated for the first time that you can take an individual’s genome and actually find a clinically relevant, medically actionable, stretch of DNA,” he said. The opportunity then exists to take clinical action based on what is found.

Lupski believes that’s “the key,” and that the ability to glean such clinically important, usable information to help individuals affected by genetic disease is going to be the “future of medicine.”

“It’s why we’ve all worked so hard to move these technologies forward,” he explained. “It took 15 years to get the original human genome sequenced, and now, on a machine, we can pump out the raw data in a few days. And that interval’s going to become shorter and shorter.”

The biggest bottleneck right now in the application of human genome sequencing to clinical medicine is the analysis, Lupski said.

“It’s analyzing the data to know and interpret what it means, and here we’re going to need computational power that many places are not quite capable of yet. So the field will also move forward as the computational field moves forward.”

Lupski believes individual DNA sequencing eventually will become a routine part of the diagnostic process, particularly as the cost of whole genome sequencing goes down.

“We had to guesstimate for the [scientific] journal what it cost to do my genome, and in the end we had to say that it was approximately $50,000,” Lupski said. “If we had repeated the experiment at the time of submission, it would have been down to $15,000. If we repeated the experiment now, it’s below $10,000. We believe within two years it will be below $8,000, and everybody is working toward the $1,000 genome.”

As part of that effort, the National Human Genome Research Institute (NHGRI) in September 2010 awarded 10 grants, totaling more than $18 million, tagged for the development of new technologies aimed at reaching that $1,000-per-genome cost.

’We’ve all been dealt a hand of cards’

Diseases arise via a number of different causes, many of them genetic, with more genetic susceptibilities or causes being found all the time.

“So we all have this hand of cards we’ve been dealt — and to what extent will that play a role in determining the best therapy for us as individuals?” Lupski said. “That’s what the goal of personalized medicine is, and it’s what we wanted to show.”

Lupski noted that currently, for a cost of around $8,000, someone with CMT can order a full-panel genetic test of the approximately 20 CMT-associated genes available for clinical testing (tests are not yet available for all the known genes).

“If you actually get the cost to $1,000, it’s going to be cheaper than a CT scan. It may be that the first thing a physician wants to do is see what hand of cards you’ve been dealt.”

Lupski contrasted what he termed the current “one-size-fits-all” medical practice to what “we’ve known all along in pediatrics.”

Pediatrics, he said, is one of the only specialties where prescriptions are based on the size and weight of the patient. In most cases, adults, whether they’re 18 or 65, receive the same prescription. Individualized considerations, such as whether one is a fast or slow metabolizer, aren’t usually taken into account.

New technology, including whole-genome sequencing, is poised to help change that.