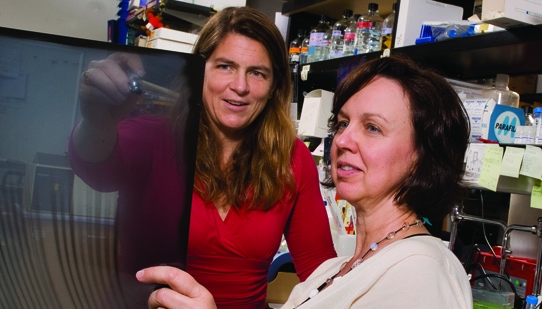 OPMD is a form of muscular dystrophy in which symptoms usually first appear between the 30s and 60s, and primarily involve the muscles of the upper eyelids and the swallowing muscles. As these muscles weaken, patients have difficulty keeping their eyes open and find that food and liquids are increasingly hard to swallow. As OPMD progresses, it can weaken the muscles of the limbs, particularly the legs.

The disease is more common in French Canadians, Jews of Central Asian descent (Bukharan Jews), and Hispanics living in New Mexico, than it is in the general population.

The underlying defect is a mutation in a gene on chromosome 14, identified in 1998 by an MDA-supported research team led by Guy Rouleau, who was then at Montreal General Hospital and McGill University in Montreal. (He’s now at the University of Montreal.)

The protein made from this gene is called polyadenylate binding protein 1, or PABPN1. Because of the genetic defect in OPMD, the protein is slightly longer than normal, containing extra molecules of the amino acid alanine. The cellular and molecular effects of this lengthening of the PABPN1 protein are the subject of ongoing investigations. One effect is that clumps form in the nucleus of OPMD-affected muscle cells.

OPMD is dominantly inherited, meaning just one mutated PABPN1 gene, passed from one parent to a child, is sufficient to cause disease symptoms.

DNA testing for OPMD has been available for several years. Without DNA testing, it’s usually not possible to detect whether or not a person has inherited the OPMD gene defect until he or she reaches middle age.