But Girls Don't Get Duchenne, or Do They?

When DMD carriers have trouble of their own

The reasoning is sound: A female has two X chromosomes to a male's one, so she has a built-in "backup" if anything should go wrong on either of her two Xs. She can be a "carrier" of an X-linked disease, because she can give a flawed X chromosome to her sons, who, having only one X, will likely develop an X-linked disorder.

DMD is one of many X-linked diseases, such as two kinds of hemophilia (including one that affected generations of European royalty) and red-green color blindness.

The gene for a muscle protein known as dystrophin is located on the X chromosome, and mutations in it were identified as the cause of DMD by MDA researchers in 1986. In boys with DMD, the lone X chromosome has only one dystrophin gene; if there's a mutation in that gene, the boys' muscles will lack dystrophin and slowly degenerate. Skeletal muscles and heart muscles are affected.

A girl almost always has two dystrophin genes and, even if one of them isn't working, the other should suffice to keep dystrophin levels high enough to preserve muscle function in both the heart and skeletal muscles. Should and usually does. But research has shown that a small minority of females who have both a working and a nonworking dystrophin gene do show symptoms of DMD.

Erin Cutinella of Bandon, Ore., is what's known as a DMD "manifesting carrier" — a female carrier of a DMD gene mutation who also has symptoms of DMD herself. (One could say, with some justification, that manifesting carriers actually have DMD, although usually in a mild form.) Although their disorder varies in severity, all manifesting carriers of DMD have one thing in common — not enough dystrophin.

Cutinella's condition was diagnosed in childhood, when she showed enlarged calf muscles (a sign of muscular dystrophy) and couldn't run. Her doctor told her that any male children she had stood a 50-50 chance of having DMD. "Some have taken that chance and gotten lucky," she says; but luck wasn't with her. Her only son was born with DMD (he would later die in an auto accident), and her own symptoms worsened over the years. She was able to work in the computer field until 1989. In 1991, she left work entirely and started drawing disability benefits.

Now 38, Cutinella finds going up stairs is increasingly difficult and that she can generally do "less and less." She can no longer wash her car or clean her house, and her back hurts constantly from muscle weakness. Frequent falls have resulted in back and knee surgeries, and she can no longer get up after a fall. "I have to crawl," she says. "I'm getting slowly worse, but the doctors don't know what to tell me." 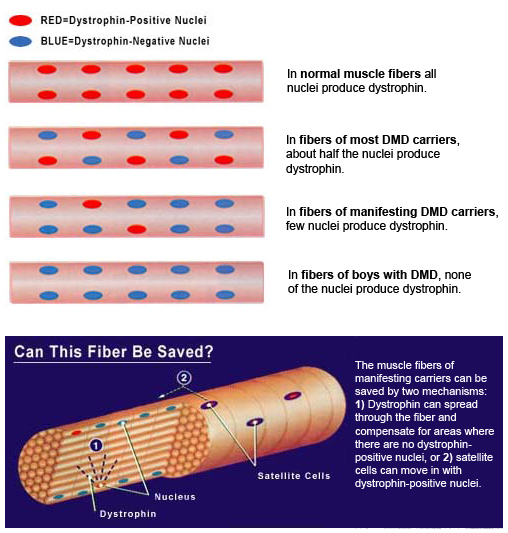 Like most manifesting carriers, Cutinella doesn't know the reason for her dystrophin deficiency, and it probably wouldn't help her a great deal to know.

But molecular geneticist and MDA research grantee Eric Hoffman is interested in knowing. Hoffman, who recently left the University of Pittsburgh for Children's National Medical Center in Washington, D.C., has been studying DMD carriers and their families.

In very rare instances, a girl may lack a second X chromosome entirely; or, her "backup" X chromosome may be damaged during development. In these cases, a girl can develop many X-linked disorders, including DMD.

There's another way for a girl to develop symptoms of DMD and, in Hoffman's view, it's by far the most common reason for the disorder in girls. The mechanism is a genetic phenomenon known as "skewed X inactivation." In this condition, a girl has the DMD gene mutation on only one of her X chromosomes — the usual carrier situation. But then her developing body does something unfortunate: Its cells start to rely on the X chromosome with the flawed gene much more often than they do the one with the working gene. The result is that most of her cells show the effects of the gene mutation — a lack of dystrophin.

"Every cell can only have one X chromosome that's working," Hoffman says. (In contrast, cells have two working copies of all the other chromosomes except the Y.) "If two are working, then the cell will die. Men only have one X, but women have two, so they have to shut down one or the other X chromosome in each cell. That's called X inactivation, and it happens when the human embryo is about 100 cells big."

At the 100-cell stage, Hoffman says, "each cell 'decides' to turn off one X chromosome or the other." That usually works fine, Hoffman says, because the choice is by random chance, and the selection of each X is about 50-50. Even if there's a mutation on one X, 50 percent of cells will use the other X, and that's usually enough to protect a girl from an X-linked disorder.

But when embryonic cells "decide" to use the X chromosome with the mutated gene far more often than 50 percent of the time — that's when a girl can get DMD or other X-linked disorders.

In DMD carriers with heart problems, it's likely that fewer than half the heart's cells are making dystrophin, and symptoms can result. In skeletal muscle, explains Hoffman, the situation is a little more complicated -- but, happily, a little better, too.

Skeletal muscle cells are made of what were once many smaller cells that fused during fetal development to form one long muscle "fiber" (the name for a mature muscle cell). The boundaries between the individual cells disappear before birth, but the nucleus of each original cell remains in the long fiber. Each nucleus, which once belonged to a separate cell, has made its own "choice" about which X chromosome to use, so, inside each muscle fiber of a DMD carrier there are some nuclei that make dystrophin and others that don't (see illustration above).

Repair work is a race

Dystrophin spread is one repair mechanism, but, Hoffman says, there's another that's probably even more important: fiber regeneration from "satellite cells." These cells, found only in skeletal muscle tissue, sit on the fiber's surface and, when needed, move in to repair damaged or degenerating muscle.

"It ends up being a race in the muscle," Hoffman says. "Dystrophin tries to compensate for the dystrophin-negative regions, but often there simply isn't enough of it to go around and the progressive destruction of muscle overtakes the repair processes."

When the race for repairs is lost, carriers don't get better; they get worse. Linda Miller, 50, of Anaheim, Calif., knows that only too well. She's a manifesting carrier and the mother of Scott, an 18-year-old with DMD who needs tracheostomy ventilation full time and has the use of only his thumb muscles — and she's worried about herself.

Miller's family has a history of DMD, but her relatives kept it hidden, and she knew nothing about the family's disorder until Scott's DMD was diagnosed and she was told she was a carrier. Only then did her years of trouble with physical education classes in school, the "abnormal muscles" the doctor said they found when she had knee surgery, even her too-easy childbirth, make sense, Miller says.

Miller, like Cutinella, has not gotten better with time. "It's gotten to the point where I can't ignore it," she says. "I can't walk great distances. When winter comes and I have to wear a coat, I can't move my arms. Even wet laundry is a problem. King-size sheets are killers. Also, Scott watches me and I know he's very concerned about me. He'll say, 'Gosh, I hope you're going to be all right tomorrow.'"

Depletion of satellite cells, replacement of some muscle with fibrous tissue and the aging process itself may account for increasing weakness with time in some carriers who start off with fairly severe symptoms.

Neurologist Jerry Mendell, co-director of the MDA clinic at Ohio State University Medical Center in Columbus, has had decades of experience seeing DMD patients and carriers. "Perhaps in these more severely affected individuals, there's a depletion of regenerative capacity of the muscle with time similar to that seen in the Duchenne patient," Mendell says. "In my own observations, I have never found a severely affected woman to improve over time."

'Symptoms should be the driving force'

Neurologist Larry Stern, MDA's medical consultant and director of the MDA clinic in Tucson, Ariz., remembers a time when at least some doctors denied that DMD carriers could have symptoms because they had been told "that's not supposed to happen." Those days are probably nearing an end, but recognition of manifesting carriers doesn't, of course, solve their problems.

Nowadays, the problem for DMD carriers may be too much attention rather than too little. Hoffman is emphatically against overzealous investigation of carriers and wants to be sure people understand that most carriers don't have any problems.

Commenting on a study published in a medical journal a few years ago showing that heart problems are common in DMD carriers, he says insignificant heart abnormalities can be revealed with sophisticated tests. These might be better left unrevealed, in his opinion, because they only cause needless anxiety. "Every once in a while, you'll get a carrier who does show heart symptoms," he says, "but most carriers don't have to worry."

"Evaluation is in order in any carrier when the diagnosis is made," Stern says. After that, he says, they should have follow-up evaluations if and when they have problems.

Mendell is also concerned about the effects of carrier examinations. "I have not been a proponent of follow-up on a routine basis for carrier women who don't have symptoms," he says. "I believe symptoms should be the driving force for the medical evaluation. There are potentially grave psychological consequences to routinely examining these women."

On the other hand, ignoring ominous symptoms can have its own grave consequences, as the McCoy family of Manhattan Beach, Calif., knows. Mary McCoy, a DMD carrier and the mother of three boys with DMD, died suddenly at 51, after a period of shortness of breath and inability to climb stairs, according to her husband, Mike. He can't be sure she died of DMD-related complications, but he suspects she did and that the treatment she got for her heart may have been too little, too late. With three disabled sons and a teaching career, Mary may have felt there just wasn't room for her own difficulties. "She didn't want to let me know what the problems were that much," McCoy says. "She just said, 'Oh, they can control it with medication.'"

If you suspect you're a DMD carrier:

If you have a daughter who may be a carrier: