From Drug Discovery to Delivery 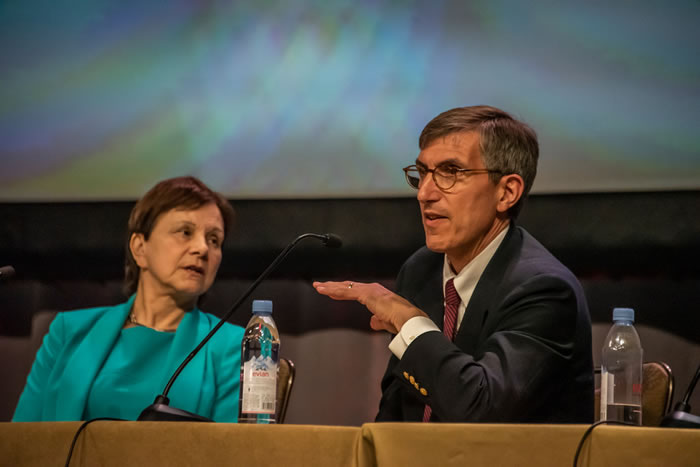 MDA was honored to have Janet Woodcock, M.D., director of the Center for Drug Evaluation and Research (CDER) at the U.S. Food and Drug Administration (FDA), present the keynote address at MDA’s 2019 Clinical & Scientific Conference. Her department, the CDER, oversees most human trials with investigational drugs — those not yet approved or not approved for a particular indication —– and conducts post-market safety surveillance for all drugs on the market to see if new safety findings occur once the drug is being widely used. CDER is also responsible for drug advertising and overseeing the manufacturing of the drugs to make sure they continue to be of high quality.

Dr. Woodcock spoke about the current explosion of scientific information that will lead to new treatments for neuromuscular disease (NMD). According to Dr. Woodcock, new scientific discoveries are “pouring out of the lab,” providing hope for people with previously untreatable diseases. Dr. Woodcock spoke about the path from drug discovery to delivery, recent FDA work in the NMD space, innovations in development programs and how patients can get involved. She also answered some frequently asked questions (see “Drug Development FAQs”).

Following the keynote, a panel of experts took the stage for an FDA panel discussion. Joining Dr. Woodcock on the panel were Peter Marks, M.D., Ph.D., director of the Center for Biologics Evaluation and Research (CBER) at the FDA; John Day, M.D., Ph.D., professor of Neurology at Stanford University; and Frank Sasinowski, J.D., adjunct professor of Neurology at the University of Rochester Medical Center.

Dr. Marks said that the FDA was committed to advancing the development and evaluation of cell and gene therapies. He also stated that the FDA was helping to individualize product development, working to overcome limitations in manufacturing, providing input and collaboration on novel endpoints, and encouraging innovative trial design. He admitted, “What keeps me up at night is will we be able to manufacture these on a scale that will allow us to bring the benefit of these therapies to patients?”

The number of Investigational New Drug (IND) applications to the FDA was increasing noticeably, said Dr. Marks. He cited a prediction from the Massachusetts Institute of Technology stating that by 2030, 40 to 60 new gene therapies will launch, and more than 500,000 individuals will be treated with gene therapies in the United States. He added that as of April 1, 2019, of the 97 requests the FDA received for Regenerative Medicine Advanced Therapy (RMAT) designation, 33 products were granted RMAT designation. Twenty of these 33 products were given Orphan Product Designation (otherwise known as Orphan Drug designation). Most of these products are cellular therapy or cell-based gene therapy products.

Dr. Day was enthusiastic about gene therapies. “It’s exciting for medicine,” he said, “because these platforms have now been proven to be effective, and we can be excited about where this is going.” He raised some thought-provoking questions. In a clinical trial in which a drug is being tested, when the result proves effective, do we approve the drug for just the patient involved in the trial? Or do we approve it for everyone? And how does the FDA make that determination? He also discussed the FDA’s role beyond drug approval. Can the FDA’s approval impact insurers’ authorization of the drugs?

Last to present during the panel discussion was Sasinowski, who called on clinical trials in this space to have elements of “seamless and adaptive design.” He referenced MDA’s MOVR Data Hub, which allows the possibility of a longitudinal dataset to be used in study cohorts. Sasinowski encouraged change and innovation in the way that researchers think of designing clinical trials. Most memorable from his presentation was his call to “Follow patients: Listen because they know what industry and academia do not know. They are the ones with the condition. They know it in their bodies. They understand it.”

Sasinowski applauded the FDA for not only listening to patients but acting on what patients tell them, primarily during and after FDA-supported patient-focused drug development meetings. By empowering patients, the FDA tries to understand and learn from those patients’ experiences.

The panel also gave advice for drug developers: Enter conversations with the FDA in early development stages. The panelists referenced times in which they’d had discussions with developers early in their process on broadening the agenda so results would be more applicable to more populations. In the end, the panel stressed the importance of continued conversations and sharing in advancement of research as a whole.

A key takeaway from the panel was that when it comes to neuromuscular diseases there is no limit to what we can achieve. It will, however, take a patient-centered approach, communication and cross-collaboration to best reach patients and to arrive at treatments and cures.

The Master Protocol: A Way to Overcome Challenges in Developing Treatments

Clinical development for neuromuscular disease drugs is long and expensive, which can be tragic for patients. The challenge is how to conduct studies in a timely manner. Master protocols are a way to overcome some of these problems so researchers can answer more questions more efficiently and in less time.

A master protocol is designed to allow drug developers to test multiple interventions in one or more patient types or diseases within the same overall trial structure. As a collection of trials, a master protocol shares key design components and operational aspects to achieve better coordination than can be achieved in single trials designed and conducted independently.