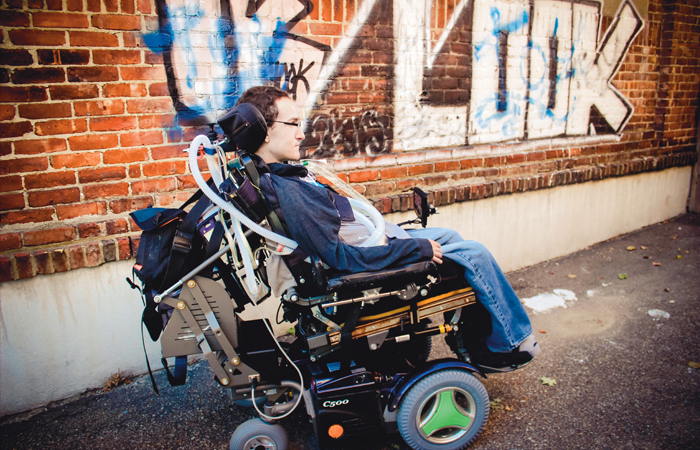 “I believe that if you are laughing, you are living.” This is 34-year-old Jared Aronson’s mantra. And he’s not particular about what deserves a good guffaw. He’ll laugh out loud over a clever play on words, a ridiculous Twitter post or even a temporary misfire as he masterminds yet another invention. Inventing is what fuels Aronson’s mojo. “I love problem-solving,” he says.

Aronson’s life situation often sparks his inventive imagination. He has Duchenne muscular dystrophy (DMD), has been using a wheelchair since age 6, has been ventilated since age 18, and he can no longer move his limbs or digits. But that’s all he cares to share about his disease. It’s a reality he lives with, not what defines him. “Just because you have a disability doesn’t mean you don’t have creativity and passion,” Aronson emphasizes.

And passion he has. When he talks about his creative endeavors, an effervescent fervor bubbles up like a fine glass of champagne. In Aronson’s case, it’s a fitting analogy. There’s so much to toast!

To begin at the beginning, Aronson is an artist. He’s always been drawn to drawing. So, in 2004, he blended his love of sketching with his entrepreneurial spirit and opened the virtual door to Madhouse Teeshirt Designs LLC, an online store that sells screen-printed T-shirts with his original artwork.

Originally, Aronson generated his drawings with pen and ink. Then he moved onscreen, using Adobe Photoshop and Illustrator. However, as his muscle strength diminished, he lost the ability to maneuver the computer mouse. Give up? Dissolve Madhouse Tees? Absolutely not. This was the sort of challenge that triggers Aronson’s problem-solving skills.

“I needed to come up with a way to draw,” Aronson recalls. First, he taught himself how to program Arduino microcontrollers, an open-source electronics platform and the software used to program it. Arduinos are designed to make electronics more accessible to artists, designers, hobbyists and anyone interested in creating interactive objects or environments.

“After messing around for a while, I figured out the programs so I could control my computer and develop my own sip-and-puff mouse,” Aronson says. “I created the device for about $50, and it works great.” (Retail prices for sip-and-puff devices generally range from $200–$800.)

With Madhouse Tees under control, Aronson needed a new challenge. Enter Rhino Buttons, another assistive device he designed out of necessity.

“I used to drive my chair with a joystick, but when I got too weak for that, I changed to another driving system using a switch,” Aronson explains. “After a while, I realized that these $85 switches were pretty high maintenance. If I didn’t clean the buttons often and carefully, they stuck. So, I’d be driving around, the switch would stick, and I’d hit a wall — or whatever else was in the way. I thought it was a riot.”

But even while he was laughing, the wheels in Aronson’s brain were turning. An out-of-control wheelchair makes for funny antics, but it was also dangerous. He set out to design a safer, more reliable switch.

To start the creative process, Aronson purchased a 3D printer to produce various button prototypes. Using his knowledge of electronics, he experimented with different designs and electronic components. His design needed to replicate the feather-light sensitivity of the switches already on the market but without the sticking issue. After two years of trial-and-error, he finally had a product that solved the sticking problem.

It was time to go public. And with that, Aronson opened his second online store, where shoppers and retailers can purchase his uniquely designed switches.

To make his product accessible, Aronson priced his switches below his competitors. “I want everyone who needs this switch to be able to afford it,” he says.

While the need to invent “a better mouse trap” typically ignites Aronson’s drive to create, he’s quick to share credit with a few key influencers. To begin with, there’s his father, who often steps up to literally assemble what Aronson sees in his mind’s eye. Then there’s his whole family, which includes his parents, five siblings and too many dogs to count. “I grew up in a busy house, and I was never treated differently than anyone else. I never thought of myself as the ‘disabled one.’ That had a big impact on me; I think it’s why I’m so motivated. If I had an idea, everyone in my family would say, ‘Just do it.’”

Aronson also draws inspiration from members of the Maker Movement, a trend in which individuals or groups create technology products using upcycled materials from computers, game consoles or other electronic devices. Ben Heck, an internet celebrity among the Maker community, is one of several Makers that Aronson follows closely. Every Friday, he clicks into YouTube and watches “The Ben Heck Show,” where Heck presents a new project.

Although Heck’s show covers a wide range of builds, he occasionally focuses on projects for individuals with disabilities. In one such episode, Heck built a power wheelchair with foot controls. “A viewer wrote to Heck because he needed a hands-free wheelchair, so he could move around and hold his new baby,” Aronson recalls. “Heck is a genius. He’s amazing.”

So what equally amazing invention is next on Aronson’s list of things to do? “I just bought 3D animation software. I’ve been told I have a pretty good sense of humor, so I’m going to write these scripts for animated characters and create little vignettes. It’s my new adventure. Let’s see where it takes me.”

Donna Shryer is a freelance writer in Chicago.

Today’s technological advances don’t just empower solo inventors like Jared Aronson — they also have led to some seriously life-enhancing assistive technology (AT) products. AT products, which include all manner of assistive, adaptive and rehabilitative devices, share one goal: enabling individuals with disabilities to perform tasks that were formerly beyond their physical capabilities.

Here’s a roundup of some of the most innovative AT products on the market:

1. GlassOuse. These smart eyeglasses allow hands-free control of Bluetooth-enabled devices. The cursor on the device screen follows the user’s head movements. The mouse is activated by biting or pressing the “click” button.

2. HouseMate. This petite device enables users to control their environment and operate appliances with a smartphone. It works with WiFi, Bluetooth, infrared and z-wave connections. Users can operate the system with switches, joystick or voice.

3. Jamboxx Pro. This harmonica-style electronic instrument connects to a computer and is activated with side-to-side head motions. The device comes with its own software, a range of sounds and backing tracks. It also integrates with Apple’s GarageBand.

4. LipStick Mouse. This computer mouse works with just the slightest lip movement. Because no sip-and-puff switch is required, the LipStick also can be manipulated with thumb and forefinger.

5. LUCY4. This hands-free keyboard is operated by a small, lightweight laser pointer that clips to a headband or eyeglasses. Slight head movements (only a couple of centimeters) activate the keys on the keyboard. It can also be controlled by joystick, mouse or switch.

6. Magic Flute. The Magic Flute is a hands-free electronic wind instrument that enables an individual to play music with small head movements and breaths. Breath strength can be adjusted to allow vent users to play, and switch control can be used for functions.

7. Neuronode. Developed by Control Bionics, the Neuronode is a wearable device that uses the body’s bioelectric electromyographic (EMG) signals to control a computer. The NeuroNode wireless sensor is placed on the skin over the muscle chosen to act as the switch. When the user attempts to move that muscle, NeuroNode detects EMG signals, even if there is no visible muscle movement.

To learn more about DIY assistive technology, read A World of Possibilities to learn how other MDA families are using innovative do-it-yourself adaptive equipment solutions to improve everyday life.