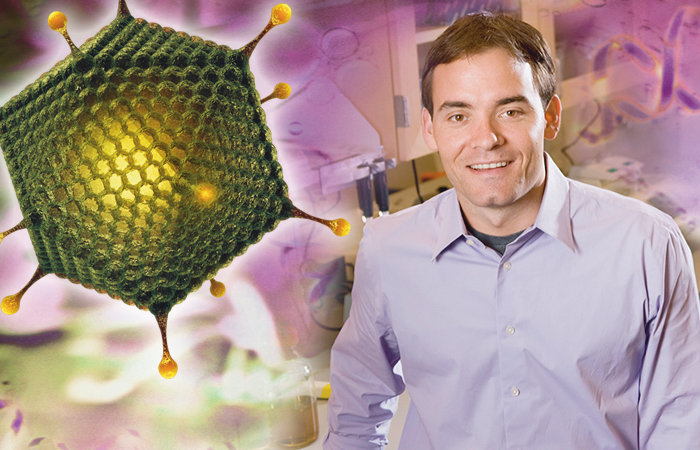 In 2001, Charles Gersbach began his graduate studies in biomedical engineering at the Georgia Institute of Technology in Atlanta, joining a center that was working on constructing semi-artificial muscle, bone and cartilage tissues.

He was interested in constructing new materials and making tissue implants, but what intrigued him more were the genetic underpinnings of tissue growth and regeneration.

So, in 2006, with a biomedical engineering degree from a joint program at Georgia Tech and Emory University, Gersbach moved to The Scripps Research Institute in La Jolla, Calif., to study molecular biology and add a solid underpinning in molecular genetics to his experience.

He then moved to Duke University to head his own laboratory in 2009. "I wanted to start going after diseases," he says. Duchenne muscular dystrophy (DMD) — a disease with a clearly defined genetic cause and lots of potential for application of new technologies — seemed ideal. "I had thought a lot about muscle regeneration and muscle cell growth, and I had been going to the musculoskeletal sessions at gene therapy conferences for years."

The technology Gersbach has chosen to pursue is known as nuclease-based genome editing — also called genome correction. It uses a type of enzyme called a nuclease — which cuts genetic material — to bring about correction, or "editing," of DNA, by cells.

The process actually has three parts: targeting a specific stretch of DNA that needs correction; causing a break (cut) in the DNA with a nuclease; and then coaxing correction of the DNA by cellular repair mechanisms.

Gersbach and his colleagues recently succeeded in correcting the dystrophin gene — which is flawed in DMD — in human muscle cells growing in a lab dish. (He notes that David Ousterout, a doctoral student in his lab, had a major role in this work.) Gersbach's current MDA support will allow the lab to attempt the same feat in mice.

In the recently completed dystrophin experiments, Gersbach didn't provide the cells any guidelines on how to repair the DNA, letting nature take its course after the DNA was cut by the nuclease.

He says the nuclease-induced break in the DNA mimics a type of damage that sometimes occurs naturally, such as during cell division or from ultraviolet light damage. The difference, however, is that the artificially inserted nuclease sticks around, causing the damage to occur repeatedly. As the cell continues to repair it, the chances that it will make a "mistake" in the DNA sequence increase.

It's those little mistakes, ironically, that he and his fellow scientists want to see — because they can override an existing error in a targeted gene, such as dystrophin. That is, in fact, what happened to the flawed dystrophin genes in Gersbach's experiments, at least in some of the cells in the lab dish.

A variation on nuclease-based correction is to supply the cells with guidelines on how to fix the targeted DNA. Gersbach is now working on a strategy in which a corrective DNA "template" (guiding pattern) would be injected simultaneously with the nuclease, instructing the cell on precisely how to perform the gene correction.

Meanwhile, the nucleases themselves have undergone some evolution since Gersbach first started in this business. The earliest of these DNA-cutting enzymes — known as zinc finger nucleases — were not the most "user friendly," he says. They can target a specific DNA sequence, but they're hard to manipulate, and you have to "make a lot of them to find one that works."

Then, around 2009, a new type of enzyme called a TALE nuclease, or TALEN, arrived on the scene. TALENs, which were used in the dystrophin correction experiments, are easier to work with than zinc finger nucleases, Gersbach says, and hit their targets more often. The first example of using laboratory-engineered TALENs in human cells was reported in 2011, and, he notes, "things have moved quickly since then."

The newest type of nuclease is a bit different from zinc fingers or TALENs. CRISPR nucleases, which were first used to do gene correction in human cells in January 2013, were originally isolated from bacteria. There, they provide a kind of immune system, keeping potentially harmful invaders from acting in bacterial cells. Unlike zinc finger nucleases and TALE nucleases, which are proteins, CRISPR nucleases are part protein and part RNA, a genetic material very similar to DNA.

It's the RNA part that can be changed to target a specific gene sequence, and Gersbach notes that it's much easier to create "designer" RNA than to create designer proteins. The protein part — the nuclease — still does the cutting, but it stays the same while the RNA gets changed to hit the desired target.

Gersbach says there are potential obstacles to bringing nuclease-based genome correction from the lab to the clinic, but he thinks they can be overcome. "New technologies are coming out all the time," he says. "First we had zinc finger nucleases, then we had TALENs, and now we have CRISPR nucleases. All these are changing how we think about correcting genes for various diseases. I have faith that with all of these scientific advances, the challenges that were previously intractable will be overcome. There are things we can do now that we could not do a couple of months ago."