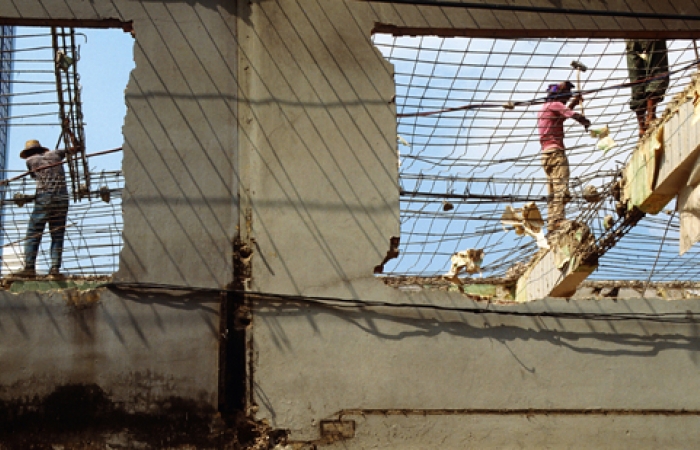 MDA-supported scientists in Ottawa have found that controlled damage to DNA is required before immature muscle cells can mature into muscle fibers.

Remodeling a building usually requires some degree of dismantling before new construction can begin. That principle, it now seems, also may apply to the remodeling of the body's cells.

Scientists at Ottawa Hospital Research Institute and the University of Ottawa have found recently that it applies to muscle cells, which can only develop from a stemlike state into mature muscle fibers after a certain amount of their DNA has been disassembled and then rebuilt.

MDA grantee Lynn Megeney, a senior scientist at Ottawa Hospital Research Institute and an associate professor in the Departments of Medicine and Cellular and Molecular Biology at the University of Ottawa, led the investigative team, which conducted experiments on mouse muscle cells and published its findings online Feb. 16, 2010, in Proceedings of the National Academy of Sciences USA.

In 2002, Megeney and his team found that immature muscle cells called myoblasts could not become mature muscle cells if they were deprived of an enzyme called caspase 3. The finding was puzzling, because caspase 3 is normally associated with cell death.

The new experiments have revealed that caspase 3 activates another enzyme, caspase-activated DNase, or CAD, which causes controlled breaks at specific points along strands of DNA, followed by DNA repair.

Without caspase 3 and CAD, there are no such DNA strand breaks, no subsequent DNA repair and no development of mature muscle cells.

"Our research suggests that when a gene is damaged, it can actually increase the expression [activity] of that gene, as long as the damage is repaired quickly," Megeney said. "This is a novel way for a gene to become activated. We've shown that this process is crucial for the development of new muscle tissue, but we believe it may be important for the development of most other tissues as well."

When the scientists treated the myoblasts with a toxin that causes random DNA strand breaks, they saw limited and sporadic cell maturation, causing them to conclude that the trigger for muscle cell maturation can't be random damage, but has to be controlled damage.

Meaning for people with muscle disease

The new findings add to the arsenal of knowledge about muscle stem cells and muscle tissue formation that is being assembled. Understanding the process by which muscle stem cells and stemlike cells become muscle fibers, under normal and abnormal circumstances, could help doctors manipulate this process to combat degenerative diseases of muscle, such as muscular dystrophies.