What causes metabolic diseases of muscle? 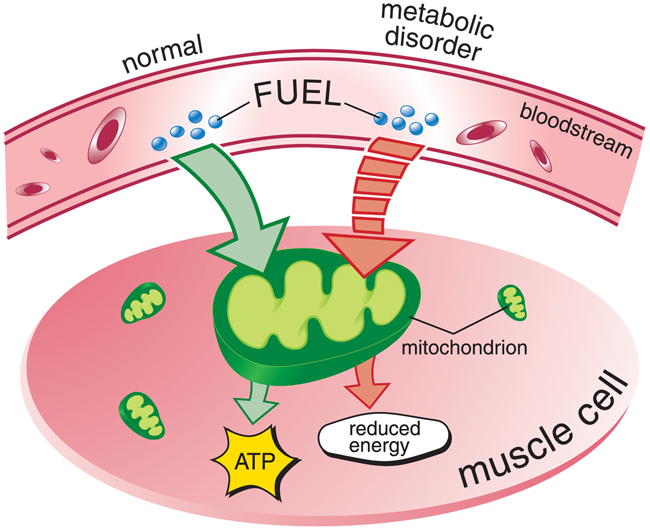 The metabolic diseases of muscle are caused by genetic defects that interfere with chemical reactions involved in drawing energy from food.

Nine of the metabolic diseases discussed on this website are caused by defects in the enzymes that control chemical reactions used to break down food. The 10th, carnitine deficiency, is caused by lack of a small, naturally occurring molecule that’s not an enzyme but is involved in metabolism.

Enzymes are special types of proteins that act like little machines on a microscopic assembly line, each performing a different function to break down food molecules into fuel. When one of the enzymes in the line is defective, the process goes more slowly or shuts down entirely.

Our bodies use carbohydrates (starches and sugars), fats and protein for fuel. Defects in the cells’ carbohydrate- and fat-processing pathways usually lead to weakness in the voluntary muscles, but also may affect the heart, kidneys or liver. Although defects in protein-processing pathways can occur as well, these usually lead to different kinds of disorders that affect other organs.

What are inheritance patterns in metabolic diseases of muscle?

On being told they have a genetic disorder such as a metabolic muscle disease, bewildered patients often ask, “But it doesn’t run in the family, so how could it be genetic?”

Metabolic myopathies can run in a family, even if only one person in the biological family has it. This is because of the ways in which genetic diseases are inherited.

Most of the metabolic diseases of muscle are inherited in an autosomal recessive pattern, meaning that a person needs two defective genes in order to have the disease. One copy is inherited from each parent, neither of whom would normally have symptoms.

Thus, the disease appears to have occurred “out of the blue,” but in reality, both parents may be carriers, silently harboring the genetic mutation (a flaw in the gene). Many parents have no idea they’re carriers of a disease until they have a child who has the disease.

Other metabolic disorders, such as phosphoglycerate kinase deficiency, are inherited in an X-linked recessivepattern, meaning the disease usually only affects males, although females are carriers. And some, such as carnitine palmityl transferase deficiency, can be inherited in an autosomal dominant pattern, meaning only one copy of the defective gene is necessary for the disease to occur.

Finally, metabolic disorders actually can occur “out of the blue” when a new mutation appears with a baby’s conception. These are called spontaneous mutations, and after they occur, they can be passed on to the next generation.

The risk of passing on a metabolic myopathy (muscle disease) to your children depends on many circumstances, including exactly which type of metabolic disease has been diagnosed.

A good way to find out more about these risks is to talk to your MDA clinic physician or ask to see the genetic counselor at the MDA clinic.