There are 33 forms of limb-girdle muscular dystrophy (LGMD), and they are classified by the genetic flaws that appear to cause them. MDA-supported research was behind much of the work that identified these LGMD genes.

Genes, located on chromosomes in each cell in the body, are the codes, or recipes, for production of the body’s various proteins. The genes associated with LGMD normally make proteins necessary for muscle function.

When protein problems arise because one of these genes is faulty, fibers in the muscles do not work properly. Gradually, the muscles become weak enough that people experience the symptoms of LGMD. Because LGMD is progressive, the muscles continue to get weaker throughout a person’s lifetime.

Some of the genes that, when flawed, cause LGMD lead to production of proteins that are normally located in the muscle cell membrane, a thin sheath that surrounds each muscle cell, helping to protect it from injury during muscle contraction. If any of these proteins is missing, the membrane loses some of its “shock-absorber” qualities and has a harder time protecting the muscle cell from injury during normal contraction and relaxation cycles.

The types of LGMD are generally classified by letters and numbers that indicate which gene is known or suspected to be involved and whether the disorder is inherited as a dominant or recessive condition, meaning whether one or two flawed genes are needed to cause it. Some physicians classify LGMD according to which protein is missing or deficient, if this is known. For example, one form may be called alpha-sarcoglycan deficiency, and another is known as beta-sarcoglycan deficiency. In the future, the term “limb-girdle muscular dystrophy” may become obsolete and be replaced by more specific terms.

How is LGMD inherited? 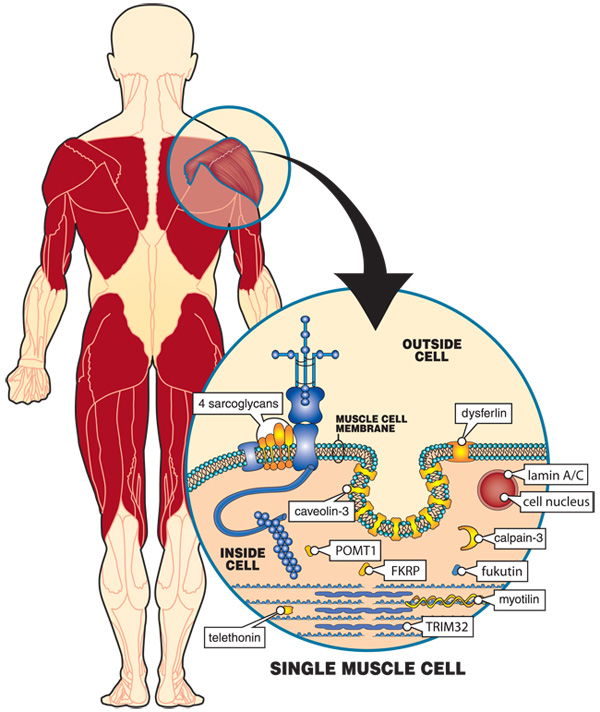 Patients often say, “LGMD does not run in the family, so how could it be genetic?” LGMD can run in a family, even if only one person in the biological family has it. This is because of the ways in which genetic diseases are inherited.

LGMD can be inherited in one of two basic ways that are known as the autosomal dominant pattern and the autosomal recessive pattern. The word “autosomal” means that the genes involved are not on the X or Y chromosome and, therefore, are passed on from men, women, or both.

A recessive form of LGMD can show up in one person when there is no family history. Other family members may have been carriers with no disease symptoms. Carriers have the genetic flaw (mutation) on a chromosome and can have a child with the disease, but only if the child’s other parent is also a carrier. So, it is not unusual for carriers of a rare recessive disease not to know they are carriers until someone in the family develops the disease.

A person with LGMD may have a brand new genetic mutation, so there may really be no family history or even carriers of the disorder in the family. However, once someone develops a genetic disease, even if the mutation is spontaneous (new) within that person, he or she can then pass on the mutation to any offspring, thereby introducing the gene for the disease into the family.

The details of inheritance risks for any particular form of LGMD depend on many circumstances, including exactly which type of LGMD has been diagnosed. A good way to find out more is to talk to an MDA Care Center physician and/or genetic counselor. More information can be found in MDA’s booklet Facts About Genetics and Neuromuscular Diseases.

To learn more, read The Changing Landscape of LGMD Research.