As with other muscle diseases, a doctor diagnoses inclusion-body myositis (IBM) by considering an individual’s personal history, family medical history, and the results of a careful physical examination. This may be followed by some lab tests, perhaps of the electrical activity inside the muscles. Usually, a muscle biopsy is ordered. This disease is often misdiagnosed because weakness is a common complaint among older adults.1

After a careful history and physical exam to document the pattern of weakness in a patient’s muscles, a doctor who suspects myositis likely will order a blood test to check the level of creatine kinase (CK), an enzyme that leaks out of muscle fibers when the fibers are being damaged. In IBM, CK levels may be only mildly elevated, less than 10 times the normal level, or even normal,2 as opposed to other inflammatory myopathies where CK levels are usually very high (i.e., 15 times the normal level).

Because the level of CK does not always indicate that a patient might have IBM, even if CK elevation is absent physicians are expected to consider other symptoms. Patients with proximal leg weakness and distal arm or leg weakness must be referred to a neurologist and have a muscle biopsy.

A physician will conduct more laboratory tests to exclude alternative diagnoses. These tests include serum electrolytes, enzymes, and hormones. In some cases, the doctor may ask for a blood test for specific antibodies, proteins produced by the immune system in myositis and other autoimmune diseases. Some of these antibodies appear to be specific to autoimmune muscle disease (antibodies against cN1A and other serum antibodies).1

The next step is electromyogram (EMG), a test in which tiny needles are inserted into the muscles to test their electrical activity both at rest and when a person tries to contract the muscle.

Inflammatory myopathies show a distinctive pattern of electrical activity that can help differentiate them from other types of muscle disease.

A nerve conduction velocity test is sometimes performed. This test measures how fast a nerve impulse travels and how strong it is.

Sometimes these tests are used to rule out disorders that may mimic the symptoms of IBM.

A biopsy sample from a person with IBM is unique because of its inclusion bodies, for which the disease is named. These “bodies” (which do not appear in normal cells) contain clumps of discarded cellular material. Inflammatory cells can be seen invading muscle tissue, although some researchers believe this invasion is secondary to the primary events in the muscle tissue, presumably those that cause the inclusion bodies to appear. 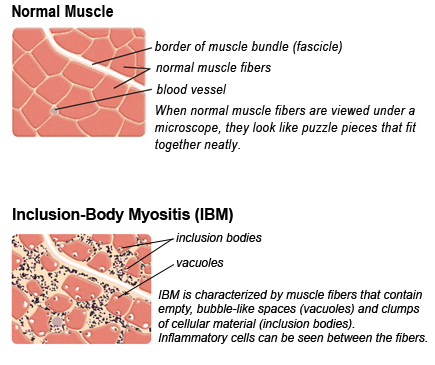