The distal dystrophies, or DDs, are caused by many different genetic defects, not all of which are yet known. Also, some of the DDs have been given different names based on various symptoms but may actually be caused by defects in the same gene.

Your own form of DD may or may not fit into one of these categories. Many of these diseases can vary from one person to the next, and in some cases, researchers are still in the process of sorting out what symptoms are linked to particular genetic defects.

This disorder has been linked to chromosome 5 in the same region as the gene that’s defective in limb-girdle MD type 1A. Symptoms first appear between about 35 and 60 years of age and include weakness of the hands, legs or voice. Difficulty in swallowing may be a feature. 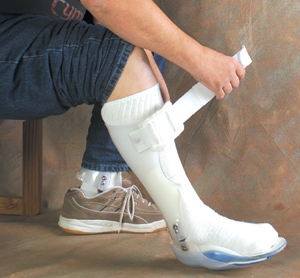 Finnish muscular dystrophy (also called tibial MD) features weakness starting after age 40 in the lower extremities (particularly the muscles over the tibia, a bone in the lower leg) and progressing slowly to the upper extremities and trunk muscles. Cardiac problems can be a feature. This distal myopathy results from mutations in the protein titin, which plays a role in muscle-fiber structure and force generation.

Finnish muscular dystrophy, which typically only affects people of Finnish descent, can be severe or benign. Those with only one defective gene experience mild weakness of the tibial leg muscles (front of the calf) sometime after age 40. Those with two defective genes have progressive weakness starting in childhood and may lose the ability to walk by age 30.

This disorder has its onset from childhood to 25 years of age. Weakness is first seen in the leg and neck muscles, and progresses slowly to include upper leg muscles, hands and more neck muscles.

Gowers-Laing distal myopathy results from mutations in the MYH7 gene, which instructs for myosin heavy chain 7, a protein that participates in muscle contraction.

HIBM1 usually begins between the ages of 25 and 40, first affecting the muscles that lift the front of the foot and the thigh muscles. Other muscles can be affected later. Under the microscope, muscle cells show inclusion bodies, which are abnormal clumps of cellular material; and vacuoles, which are cellular bubbles. The cause is unknown.

This disorder involves weakness that begins in the lower extremities, especially in the calf muscles. It can progress to other muscles as well. Symptoms usually begin between 15 and 30 years of age.

The genetic defects that cause Miyoshi myopathy are in the gene for the dysferlin protein. Defects in the dysferlin gene also can cause limb-girdle muscular dystrophy 2B, which results in muscle weakness in and around the hips and shoulders. People with the same genetic defect in their dysferlin genes can have either disease, and it isn’t known what determines which pattern of symptoms a person gets.

Usually found in families of Japanese descent, this DD has symptoms that begin between ages 20 and 40. The anterior lower leg muscles (those in the front of the leg) are typically affected first, but the disease may progress to affect upper arm and leg muscles, and neck muscles. The quadriceps muscles (in the thigh) tend to remain strong.

The disease is caused by defects in the GNE gene, the same gene that underlies one form of hereditary inclusion body myositis (HIBM2). (This condition also is called inclusion-body myopathy.)

The GNE protein that comes from this gene modifies compounds on cell surfaces in a way that’s needed for cells to signal each other and adhere to each other.

VCP Disease is caused by a mutation in a gene called the Valosin Containing Protein (VCP or p97). When the VCP gene is mutated, cell division and mitochondrial function are disrupted leading to several possible symptoms and disorders.

VCP Disease is autosomal dominant and primarily manifests as IBMPFD, which identifies the three primary disorders originally associated with the disease:  Inclusion Body Myopathy, Paget's Disease of Bone, and Frontotemporal Dementia.  A person with IBMPFD may have one, two, or all these disorders.

A genetic connection has now been established between the VCP mutation and more common disorders such as ALS, Parkinson’s and CMT. For more information go to www.curevcp.org.

This form of distal muscular dystrophy usually has an onset between 40 and 50 years of age. Upper extremities tend to be affected first, then lower ones. The degree of muscle weakness involved can range from mild to severe. The cause remains unknown.