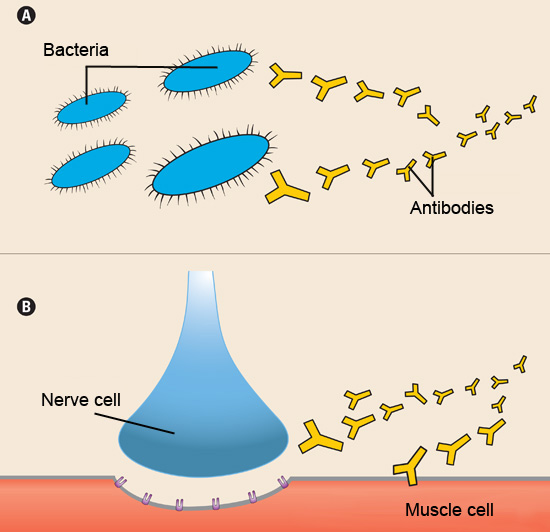 In all these diseases, an army of immune cells that would normally attack bacteria and disease-causing "germs" mistakenly attacks cells and/or proteins that play an essential role in the body. In most cases of MG, the immune system targets the acetylcholine receptor — a protein on muscle cells that is required for muscle innervation and eventually contraction (see illustration to the right).

At the normal neuromuscular junction, a nerve cell causes a muscle cell to contract by releasing the chemical acetylcholine (ACh). ACh attaches to the ACh receptor — a pore or "channel" in the surface of the muscle cell — twisting it open and allowing an inward flux of electrical current that triggers muscle contraction. These contractions enable someone to move a hand, to dial the telephone, to walk through a door, or to complete any other voluntary movement. 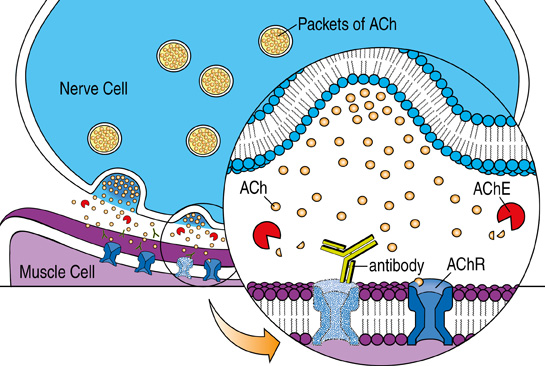 About 85% of people with MG have antibodies against the ACh receptor (AChR) in their blood. The antibodies (Y-shaped protein that immune cells, called B cells, use to attack bacteria and viruses) target and destroy many of the AChRs on muscle. Consequently, the muscle’s response to repeated nerve signals declines with time, and the muscles become weak and eventually disappear.

Scientists do not know what triggers most autoimmune reactions, but they have a few theories. One possibility is that certain viral or bacterial proteins mimic "self-proteins" in the body (such as the AChR), stimulating the immune system to unwittingly attack the self-protein.

There's also evidence that an immune system gland called the thymus plays a role in MG (see illustration below). Located in the chest just below the throat, the thymus is essential to the development of the immune system. From fetal life through childhood, the gland trains immune cells called T cells to distinguish self from non-self. 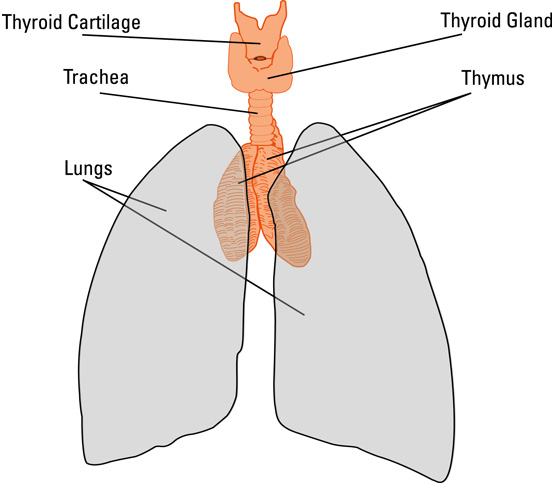 About 15% of people with MG have a thymic tumor, called a thymoma, and another 75% have thymic abnormalities, a condition called thymic hyperplasia. When the thymus does not work properly, the T cells might lose some of their ability to distinguish self from non-self, making them more likely to attack the body’s own cells.

What is the genetic susceptibility in MG?

Although MG and other autoimmune diseases are not hereditary, genetic susceptibility does appear to play a role. It seems likely that genetic factors also contribute to the pathogenesis of MG. Certain human leukocyte antigen (HLA) types, cell-surface proteins that are responsible for the regulation of the immune system, have been associated with myasthenia, including HLA-B8, DRw3, and DQw2.1 MuSK antibody-positive myasthenia is associated with haplotypes (clusters of genes inherited together) DR14 and DQ5.2

Even for identical twins, however, that risk is relatively small. Most studies suggest that when one twin has an autoimmune disease, the other has less than a 50% chance of getting the same disease.