Mitochondrial diseases are not contagious, and they are not caused by anything a person does. They’re caused by mutations, or changes, in genes — the cells’ blueprints for making proteins.

Genes are responsible for building our bodies and are passed from parents to children, along with any mutations or defects they have. That means that mitochondrial diseases are inheritable, although they often affect members of the same family in different ways. (For more information about genetic mutations and mitochondrial disease, see below.)

The genes involved in mitochondrial disease normally make proteins that work in or on the mitochondria. Within each mitochondrion (the singular form of mitochondria), these proteins make up part of an assembly line that uses fuel molecules derived from food to manufacture the energy molecule adenosine triphosphate (ATP) through a process named oxidative phosphorylation. This highly efficient manufacturing process requires oxygen; outside the mitochondrion, there are less efficient ways of producing ATP without oxygen.

Proteins toward the end of the line — organized into five groups called complexes I, II, III, IV and V, and two mobile electron carriers, coenzyme Q10 and cytochrome c — harness the energy from those electrons to make ATP. Complexes I through IV shuttle the electrons down the line and are therefore called the electron transport chain, and complex V actually churns out ATP, so it is also called ATP synthase.

Defects in genes that are related to the structure and dynamics of the mitochondria may be also involved in the development of myopathies. When a cell is filled with defective mitochondria, not only does it become deprived of ATP, it also can accumulate a backlog of unused fuel molecules and oxygen, with potentially disastrous effects.

In such cases, excess fuel molecules are used to make ATP by inefficient means, which can generate potentially harmful byproducts such as lactic acid. (This also occurs when a cell has an inadequate oxygen supply, which can happen to muscle cells during strenuous exercise.) The buildup of lactic acid in the blood — called lactic acidosis — is associated with muscle fatigue and might actually damage muscle and nerve tissue.

Meanwhile, unused oxygen in the cell can be converted into destructive compounds called reactive oxygen species, including so-called free radicals. (These are the targets of antioxidant drugs and vitamins.) 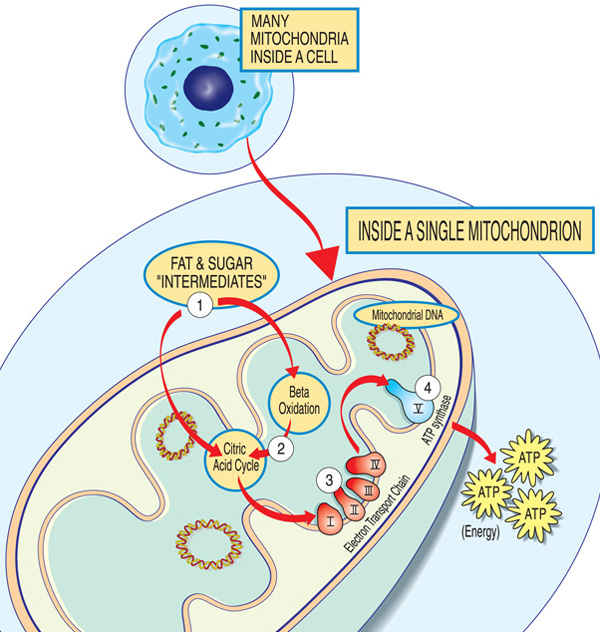 Each mitochondrion is an energy factory that “imports” sugars and fats, breaks them down and “exports” energy (ATP) via these steps: Fat and sugar intermediates enter the mitochondrion. Fatty acids are broken down through beta oxidation and the removal of electrons in the citric acid cycle. Electrons are passed through the major complex of the electron transport chain. ATP is made by ATP synthase.

What are the inheritance patterns in mitochondrial myopathies?

To understand how mitochondrial diseases are passed on through families, it is important to know that there are two types of genes essential to mitochondria. The first type is housed within the nucleus — the part of our cells that contains most of our genetic material, or DNA. The second type resides exclusively within DNA contained inside the mitochondria themselves.

Most nDNA (along with any mutations it has) is inherited in a Mendelian pattern, loosely meaning that one copy of each gene comes from each parent. Also, most mitochondrial diseases caused by nDNA mutations (including Leigh syndrome, MNGIE, and even MDS) are autosomal recessive, meaning that it takes mutations in both copies of a gene to cause disease.

Unlike nDNA, mtDNA passes only from mother to child. That is because during conception, when the sperm fuses with the egg, the sperm’s mitochondria — and its mtDNA — are destroyed. Thus, mitochondrial diseases caused by mtDNA mutations are unique because they are inherited in a maternal pattern (see illustration below). 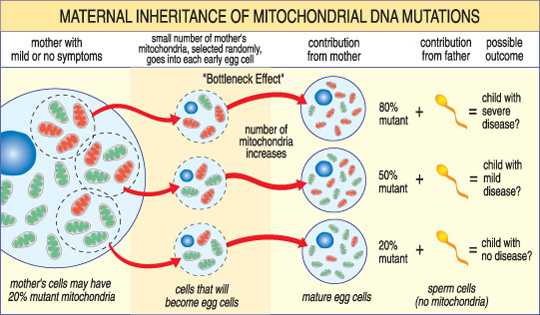 The severity of a mitochondrial disease in a child depends on the percentage of abnormal (mutant) mitochondria in the egg cell that formed them.

Another unique feature of mtDNA diseases arises from the fact that a typical human cell — including the egg cell — contains only one nucleus but hundreds of mitochondria. A single cell can contain both mutant mitochondria and normal mitochondria, and the balance between the two will determine the cell’s health. This helps explain why the symptoms of mitochondrial disease can vary so much from person to person, even within the same family.

Imagine that a woman’s egg cells (and other cells in her body) contain both normal and mutant mitochondria, and that some have just a few mutant mitochondria, while others have many. A child conceived from a “mostly healthy” egg cell probably would not develop disease, and a child conceived from a “mostly mutant” egg cell probably will. Also, the woman may or may not have symptoms of mitochondrial disease herself.

These diseases also can arise in a sporadic fashion, meaning they may occur with no family history.

The risk of passing on a mitochondrial disease to children depends on many factors, including whether the disease is caused by mutations in nDNA or mtDNA. A good way to find out more about these risks is to talk to a doctor or genetic counselor at an MDA Care Center. Also, see Facts About Genetics and Neuromuscular Diseases.