What happens to someone with dermatomyositis?

For many decades, dermatomyositis was considered “polymyositis with a rash.” It’s now known that the two diseases have some fundamental differences, but for most doctors, it’s still the skin (“dermato”) manifestations of dermatomyositis that make it a distinct disorder among the muscle diseases.

In dermatomyositis, a distinctive reddish or purplish rash, presumably due to inflammation of surface blood vessels, may occur over the face, neck and chest; on the shoulders and upper back, resembling a shawl; and/or on the elbows, knees and ankles. The eyelids may appear as if eye shadow has been applied.

The skin may be scaly, dry and rough. Sometimes it looks like a sunburn.

A condition called calcinosis, in which calcium is deposited just under the skin in hard, painful nodules, also can occur, and seems to be more common in children with dermatomyositis. 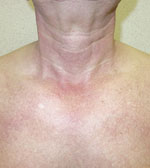 Inflammation of the fat lying just under the skin, called panniculitis, also can occur, causing tenderness and feeling like little bumps.

The muscles of the shoulders, upper arms, hips, thighs and neck display the most weakness. The swallowing muscles can be involved, and a few people have difficulty chewing because of muscle weakness.

The weakness usually becomes noticeable over the course of several weeks, but it can move faster (days) or more slowly (months).

Joint pain with or without true arthritis (joint inflammation) can be part of dermatomyositis.

Constriction of the blood vessels around the heart and inflammation of the heart muscle tissue can lead to cardiac complications.

Inflammation of the lung tissues also can occur.

Patients with dermatomyositis can have some inflammation of the blood vessels of the intestinal tract, eyes and kidneys, and these organs can be damaged as a result.